Heads Up Super Band: Live At The Berks Jazz Fest 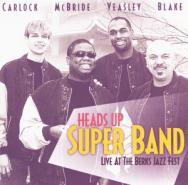 While crowds throughout Europe have cheered Heads Up International recording artists Joe McBride, Kenny Blake and Gerald Veasley at special live performances of the Heads Up Super Band, the trio have rarely teamed for U. S. appearances. However, stateside fans are in for a treat September 29 when the Seattle-based label releases the band's first international recording -- Heads Up Super Band Live at Berks Jazz Fest. Featuring pianist / vocalist McBride, saxophonist Blake, and bassist Veasley with drummer Keith Carlock, the disc will also be an enhanced CD featuring video footage from the 1998 concert in Berks County, Pennsylvania.

The Super Band brings together the top smooth jazz players from Heads Up's roster and highlights each artist and his work. "Though Kenny, Joe and Gerald are all great solo artists with followings of their own, sometimes we can't resist the temptation to create a monster show featuring all of them together," explains Dave Love, president of Heads Up International. "Together, these guys are the ultimate contemporary jazz band. They have sold out shows all across Europe, so we thought it was time to share their collaborations with audiences at home. Following Berks, the Heads Up Super Band also performed at the Capital Jazz Festival, Syracuse Jazz Festival, Carolina Music Fest and Clifford Brown Jazz Festival."

In addition to Heads Up Super Band Live At Berks Jazz Fest, three of the group members have recorded their own solo projects for the label:

Acclaimed Steeltown saxman Kenny Blake was a smooth jazz radio favorite with his 1996 album, An Intimate Affair, his fourth CD for Heads Up. Best known for his trademark R&B rolling sound recalling King Curtis and Cannonball Adderly, Blake signed with Heads Up in 1991 after a stint with pop-jazz band Cabo Frio, Pianist / vocalist Joe McBride is riding high on the success of his 1998 recording, Double Take, his fourth Heads Up release. Refusing to confine himself to any particular genre of music, the Dallas-based musician blends jazz, bebop, R&B, funk, gospel and hip hop on the new album, which features guest performances by saxophonists Dave Koz and Richard Elliot, flügelhornist Rick Braun, vocalist Phil Perry, and guitarist Peter White.

Drummer Keith Carlock is the newest member of this tight ensemble. Carlock is also currently recording and touring with Steeley Dan, The Blues Brothers, Paula Abdul and others.