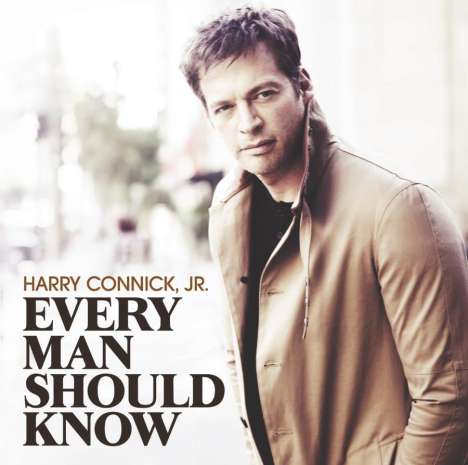 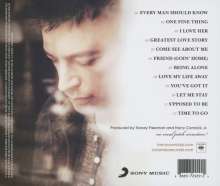 Harry Connick, Jr. has built a reputation for musical and emotional honesty. Never one to rest on his ever-growing list of laurels, Connick exposes his feelings as never before on Every Man Should Know. The new CD to be released on Columbia Records, contains twelve original songs for which Connick wrote music, lyrics and arrangements.

“No rules, no limits,” is how the multi-talented artist describes the songs in his liner notes for the new collection. “I don’t recall ever reaching quite as deeply – or confidently – into my inhibition pool.”

When asked about the transformation, Connick explains that “I used to be more comfortable writing in a fantasy-style concept, using ideas that intrigued me but didn’t necessarily come from personal experience. It’s one thing to assume the role of a storyteller – it’s quite another when the story is your own. I felt ready to explore some of my personal experiences in some of the songs this time around.”

The title track is indicative of how anecdote and imagination yield inspired results. “I was building a workbench with a carpenter friend,” Connick explains, “and my lack of any knowledge about carpentry left me feeling so inadequate. It led me to think about other things that every man should know, like how to change a tire. Then I began thinking about what everybody should know how to do, and that’s to love.”

“`Come See About Me’ is a song about a guy who’s heartbroken that was inspired by a line Kim Burrell sang on `All These People’ [a song about the abandoned Katrina victims from Connick’s 2007 CD Oh, My NOLA]. It was tough for me to sing, because the thought of watching the one you love move on is so painful. Just the idea of it hurts, and it took me a few tries just to figure out how to sing it.”

More immediately personal feelings underscore “The Greatest Love Story,” a song for Connick’s wife Jill that includes both “inside” allusions (“Jill’s from Texas, which is why the pedal steel guitar is in there”) and a direct reference to Connick’s late mother Anita. “Before, I would never talk about my mother, much less write about her,” he admits. “It took years and years, and this might be my first specific lyric reference to her in a song. Her life and her death were so significant to me, and over time they’ve gained layers. I actually cried the first time I sang the lyrics in the studio.”

Connick is quick to credit his collaborators, including guest soloists Branford Marsalis (whose soprano sax enriches “Let Me Stay”) and Wynton Marsalis (extending the reflective mood of “Being Alone” with his trumpet) and longtime Band regulars Jerry Weldon on tenor sax and old friend Jonathan DuBose, Jr. on guitar on “I Love Her.” He gives special credit to guitarist Brian Sutton and the Nashville musicians assembled for several tracks. “Those Nashville guys are deep,” Connick marvels. “Before they play a note, they ask, `What are we playing about?’ And they like to play with you when you sing rather than laying down tracks before you sing, because they want to understand the sentiment of each song. They really helped me capture ‘Love My Life Away,’ a song about a guy dying from a disease who is facing the plodding nature of his life.”

A common feature of every track, from the jazz feel of “One Fine Thing” to the country feel of “Time to Go,” is the perfect fit of each Connick arrangement. “You have to know what’s right for each tune,” he explains, “I’ve learned to trust my instincts. I usually start with the lyrics, which suggest a melody, which suggests a groove – at which point the arrangement becomes fairly clear.”

The cornucopia of music contained on Every Man Should Know reflects only some of the songs that Connick has created in the past two years. More of his recent output can be heard on Smokey Mary, a limited-release album that appeared in February to mark the 20th anniversary of the Krewe of Orpheus, a Mardi Gras parade that Connick helped co-found. “It was my idea to have a Mardi Gras Krewe that represented all races and genders, and every corner of New Orleans,” he says. “Our captain, my high school drama teacher, Sonny Borey, suggested that I write a song called `Smokey Mary Choo-Choo Train,’ in honor of a coal-engine train that ran from the Faubourg Marigny to the levee a century ago. All of the songs on that recording have the same spirit, and soon I had an entire party record.”

One track, the jubilant “S’pposed to Be,” is included on both discs. “That’s the one real New Orleans track on the new album,” he acknowledges, “but what [guest vocalist] Kim Burrell and [trumpeter] Leroy Jones did with it just has to be heard. I gave them a very simple melody with simple chord changes, and what Kim sings and Leroy plays are just works of art.”

In addition to the wealth of original music on his new discs, Connick will release “Love Wins.” The song is dedicated to Ana Grace Marquez-Greene, one of the children killed in the Newtown, Connecticut tragedy and the daughter of former Connick Big Band tenor saxophonist Jimmy Greene. Connick sang at Ana Grace’s funeral, and was inspired by a speaker at the service who emphasized that love trumps even the greatest tragedy. All proceeds from sale of “Love Wins” will go to the Ana Grace Fund.

The range of these songs is vast, touching upon love and loss, celebration and sorrow, tragedy and hope. With Every Man Should Know, Harry Connick, Jr. triumphs once again, with a depth of feeling that signals another milestone for one of the music world’s most multi-faceted artists.