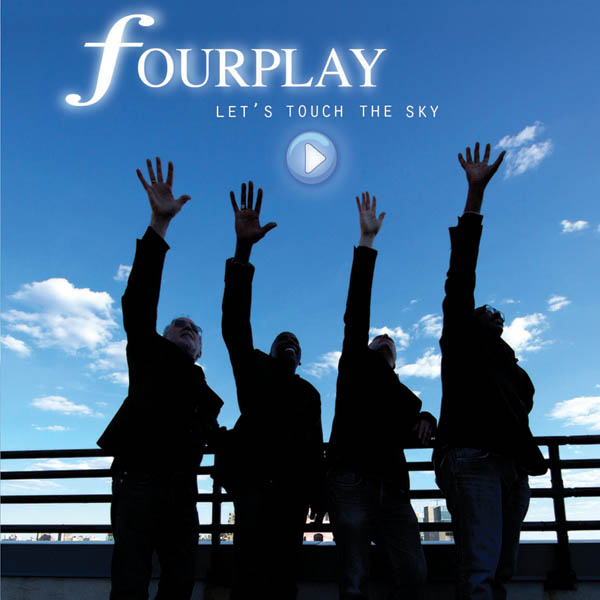 Sometimes you have to shake things up, push a little farther, reach a little higher – even when you’re a contemporary jazz foursome that’s been operating at the top of its collective game for two decades.

After twenty years and a dozen albums, in an industry that has undergone sweeping transformations in the past decade, Fourplay knows that the only thing that’s certain, in music or any other business, is change. The latest proof of that axiom is the new face in their lineup – that of guitarist Chuck Loeb, who makes his compelling debut with the quartet on Let’s Touch The Sky, the band’s new recording on Heads Up International, a division of Concord Music Group.

The infusion of new blood into the Fourplay lineup creates an opportunity to bring an even newer level of energy and inspiration into a band that is already known for taking chances and pushing the limits of contemporary jazz. “All four of us have been in this business long enough to know that there’s always pressure to compromise, and we don’t want to do that,” says James. “We don’t want to end up in the middle of the pack. We always aim to be leaders, and take the music to another level and raise the standards higher. I think the music on this new record, thanks in large part to Chuck’s early contributions – and to the ongoing team spirit of the band as a whole – is very much a reflection of that philosophy.”

Loeb, who openly admits to being a fan of Fourplay since their earliest recordings, sees his new membership status as the opportunity of a lifetime. “I want to be a part of the legacy they’ve built, going all the way back to their first recording and right up to their most recent one,” he says. “There’s been an incredible level of quality in the musicianship, the writing, the whole sonic palette that they’re famous for. I’m excited to be a part of the next step in the evolution of all that.”

Guest vocalists Ruben Studdard and Anita Baker appear on the soulful “Love TKO” and the dreamlike “You’re My Thrill,” respectively. Studdard was recruited by East, after the two had appeared together in a live performance in Washington, DC. “They were filming a television special,” East recalls. “There was a break to reload the cameras, and I just started playing the bass line of ‘Love TKO.’ Ruben stepped up to the microphone to sing, and everyone in the room just stopped. I knew right then that we needed to have him sing this song on a Fourplay record, and when we asked him, he was very much up for it. The whole thing just came together so easily.”

Mason, who has held down the groove for Fourplay since the very beginning, says time has done nothing to dull the edge. The band continues to explore new ways to reach for the next level of musicianship and creativity. “Let’s Touch The Sky is the perfect title for where we are right now,” he says. “In some ways, bringing someone new into the fold has made us a new band. It opens up new opportunities and new potential, and we want to see how high we can take it.” (concordmusicgroup. com)

"Like the well-oiled precision machine that it is, Fourplay's latest cements its reputation as a one of the genre's best-ever contemporary jazz bands. While some of its peers are recycling and refitting every new trend that comes down the pike, Fourplay maintains its mastery with modern touches and classic musicianship that will keep fans happy to ....Touch and absorb this bit of ......Sky over and over again. Highly recommended." (soultracks. com)

"Let’s Touch the Sky brings an eclectic mix of the safe and contemporary, which is smooth jazz peppered with R&B, with the complexities of jazz." (smooth-jazz. de)

"A great effort from a jazz group that has been around for nearly two decades. To be able to continue to compose and execute music at this level together is a true testament to their musicianship and camaraderie." (bassfrontiersmag. com)