Eliane Elias: I Thought About You: A Tribute to Chet Baker

Eliane Elias (geb. 1960)
I Thought About You: A Tribute to Chet Baker
CD
CD (Compact Disc) 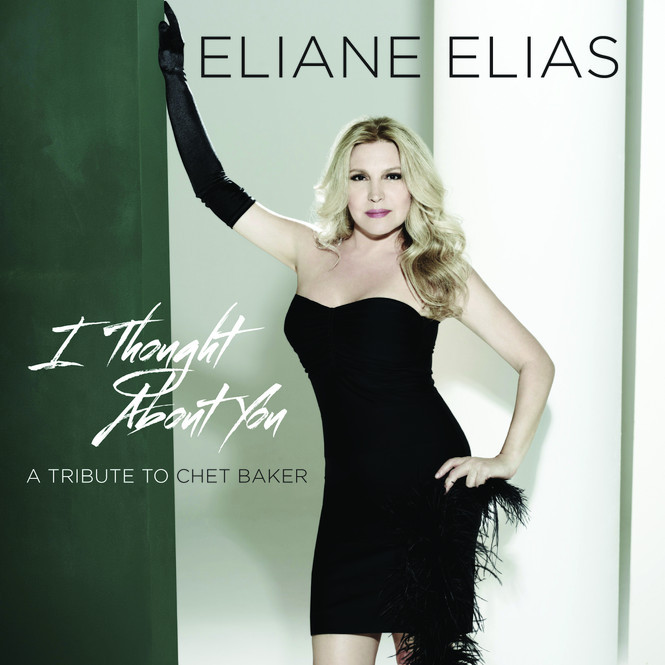 There’s no question about it: pianist / vocalist Eliane Elias is amazingly versatile. Concord Jazz presents Elias’ I Thought About You (A Tribute To Chet Baker), an album that offers her personalized spin on the work of a key American jazz artist while spotlighting her connection to the singer-instrumentalist tradition. It fully demonstrates the range of interests that Elias’ art now boasts, and arrives with a statement of purpose: jazz repertoire can sound totally fresh when delivered with ingenuity and passion.

Long known for her native feel of Brazilian music, this new disc truly demonstrates Elias' expertise in yet another realm: an interpreter of American standards. An expressive, swinging singer and insightful instrumentalist and arranger, on I Thought About You she thoughtfully switches the size and approach of her impressive ensemble from track to track, yielding to each tune’s inner logic.

Her choice of musicians underscores her decision to have her music move in various ways. Along with guitarist Oscar Castro-Neves, drummer Rafael Barata and percussionist Marivaldo dos Santos unite with Elias and husband, esteemed bassist Marc Johnson, for a few of the Brazil-slanted tracks. The other core band members are the always impressive guitarist Steve Cardenas and the exquisite drummer Victor Lewis. If you hear a deep chemistry between the bass and drums, remind yourself that Johnson and Lewis were once part of Stan Getz’s most limber rhythm section. At various points, Elias’ former husband Randy Brecker drops in to add some of his incisive brass magic to the mix.

By and large, Elias has turned to pieces from the Great American Songbook that have been associated with Baker. Some are swaggering and bluesy, some are poignant and graceful, some are intimate and bittersweet – each is addressed like the jewel that it is.

“When selecting the repertoire, I chose songs that portrayed a wide spectrum of Chet’s work,” she says, “not only the ballads for which he was best known, but also the mid tempo and up tempo pieces he performed with such fluidity and inventiveness throughout his career.”

Jazz fans know that Chesney Henry Baker, Jr, the esteemed West Coast trumpeter who made his initial mark with the Gerry Mulligan Quartet, had plenty of the ingenuity and passion mentioned above in his own work. A celebrated improviser who played with everyone from Charlie Parker to Stan Getz, Baker helped establish the lithe swing associated with the mid-’50s sound of West Coast cool. His charisma was unmistakable – he brought an unmistakable charm to any tune he addressed. With a lilt in his voice and a casual sense of rhythm, his influence made a mark on many musicians, including important Brazilian artists.

“Chet and the cool jazz movement were influential to the bossa nova artists in the 1950s,” explains Elias. “Joao Gilberto, Toquinho, Vinicius de Moraes, and Antonio Carlos Jobim are just a few who have spoken to this influence. Chet sang and played with a purity of sound, and had a way of phrasing without much affectation, floating over the bar line, an approach which is immediately recognizable in the delivery of some of the great bossa nova artists, like Joao Gilberto.”

Elias makes sure the influence of cool jazz on the bossa nova is represented on several of the 14 tracks. “There Will Never Be Another You” features an ingenious arrangement, interposing Brazilian rhythms and straight-ahead jazz feel. “Embraceable You” is intoxicating, with a bluesy bossa personality rendered eloquently by her beautiful voice and piano supported by her brilliant Brazilian rhythm section. The stylistic blend continues on “Let’s Get Lost,” where Elias’ seductive coo is just as enticing as the instrumentalists’ work. “These three songs were very natural to me to place in a Brazilian groove,” she says, “and I easily relate to romantic lyrics.”

As a singer, Elias’s emotional candor and deep sense of time are part of I Thought About You’s main attractions. The title track has a vocal style that's just as reminiscent of prime Frank Sinatra as it is Baker. Elias’ charm, swing and charisma are right up front, and united with her incisive piano playing, they make a peerless package.

The trio rendition of “You Don’t Know What Love Is” arrives with a shadowy mood that borders on cinematic. The hush of her piano mixed with Johnson’s glowing bottom and Lewis’ whispering brushes provides an eerie backdrop for lines like “You don’t know how lips hurt / until you’ve kissed and had to pay the cost.” Elias embodies the ache like a master. Intimacy is a crucial element in several of these tunes, and she uses quiet as yet another instrument.

Her agility as a singer is set in full relief on the opening of “Blue Room,” as well. In a duet, she and Johnson sway around each other, equal parts playful and imposing. “In 2008, Marc and I were at a live interview at a radio station in Paris,” says Elias. “Our host surprised us with a recording of Chet singing ‘Blue Room’ a cappella, which has the lyric ‘and every day’s a holiday because you’re married to me.” At that point in time not many people knew we were married, and it was very touching to us. Since then, this song was always on the ‘to do’ list for this project.”

Like six other tracks on the album, “Blue Room” is presented without a drummer – another way to create an intimate feel. “There’s something about the space that not having drums provides,” explains Elias. “It can bring the listener closer into the music. Through much of his career, Chet performed in sparse, drummerless settings. There’s an interesting quote from him that speaks to this: ‘It takes a hell of drummer to be better than no drummer at all.’”

Lack of percussion doesn’t slow down the action on quicker pieces. The tempo of “Just In Time” is blistering, and the virtuosity of Elias’ piano is an adrenaline rush. “Marc drives that beat,” she continues, “and what about the Brazilian singer chewing all those words in English? Ha! This was a lot of fun.”

A nod to the superb brass player would be lacking without a horn in the mix, and the brilliant trumpeter Randy Brecker brings his horn prowess front and center on several songs. Want to talk refined lyricism? His solo on “That Old Feeling” darts around the melody with an authoritative élan. And the flugelhorn work on “Just Friends” finds a way to goose the action while still feeling quite dapper. “Randy killed,” reports Elias. “He always plays beautifully but he outdid himself this time. During the years we were together, we often heard Chet’s recordings in the house.”

This isn’t Elias’ first dive into a master’s songbook. She’s essayed the work of Antonio Carlos Jobim and Bill Evans previously. But this nod to Baker has been on her mind for a while. In 2010 when she was signed by Concord, this project was to be her first for the esteemed label. Because of the sequence of her output to that point, she opted to first record a Brazilian themed album, which became the critically and publicly acclaimed Light My Fire.

I Thought About You was well worth the wait, of course. It’s one of Elias’ most thoughtfully constructed albums, and a date that shows just how adroitly she moves around the bossa-jazz-blues nexus. She truly is an artist beyond category.

Elias closes the album with its most tender moment, “I Get Along Without You Very Well.” On the original, Baker starts the track with only a celeste behind him. Elias stuck to her piano to get the job done on her update of this heartbreaking farewell, and it’s a chilling interpretation. Her voice is mix of pride and vulnerability, and her touch on the keys make the chord changes drop into place like dusk descending.

From buoyant swing to luminous bossa nova to jaunty blues, I Thought About You achieves Elias’ initial goal: creating a well-rounded portrait of a master. “I chose each of these songs to speak about various feelings and aspects of love,” she concludes, “but I wouldn’t feel that I’d done a true tribute to Chet if I hadn’t addressed some other dimensions of his work as a singer / instrumentalist.”

Frank Chastenier
For You
CD
EUR 8,99*