Diana Krall: All For You - A Dedication To The Nat King Cole Trio

Diana Krall (geb. 1964)
All For You - A Dedication To The Nat King Cole Trio
CD
CD (Compact Disc) 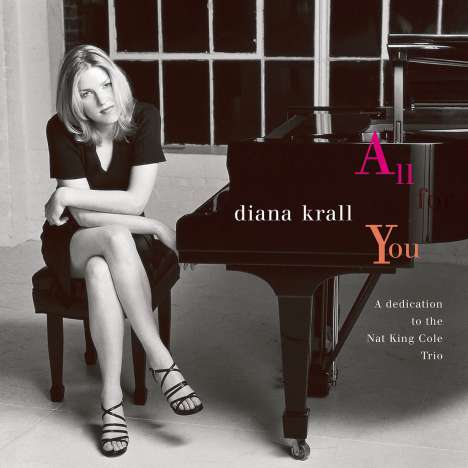 (from the liner notes) Scene: A semi-dark recording studio in Manhattan. Time: Two-thirty in the afternoon -- half past breakfast, if you live on Jazz Standard Time. Benny Green is sitting patiently at the Hamburg Steinway in the piano booth; Tommy LiPuma, the producer, is slumped in a chair in the main studio, fidgeting with his headphones. ("I like to be right in the middle of things. Too many distractions in the control room. Too much stuff to think about.") The shy-looking blonde in the corner booth, waiting for her cue to sing, is Diana Krall. This is her recording session, but you wouldn't know it. She acts as if she were the least important person in the room.

A disembodied voice slates the take: "O. K., we're rolling. If I Had You, Take five." Green tosses off four lean bars of intro; LiPuma rests his head in his hands, ready to listen. And all at once, the air is filled with a sound that is soft and warm and strangely knowing, floating out of the studio monitors like the smoke from a film-noir cigarette: I could show the world how to smile / I could be glad all of the while / I could change the gray skies to blue / If I had you... .