Chick Corea: A Week At The Blue Note 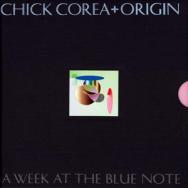 Chick Corea (1941-2021)
Return To Forever
CD
EUR 17,99*
*** Japan-Import
Capturing the beginnings of Chick Corea & Origin's evolution, A Week At The Blue Note is a special 6-disc collection presenting six sets of the band's music recorded over three nights, live at the Blue Note. This boxed-set treats listeners to intimate, unedited performances of Chick's brand new band in the first week of developing their music. "Originally I thought that I might only use the recordings contained on this six-disc set for promotional purposes (like a demo) and record the group in a studio setting later. But it turns out, after we played and recorded, I fell in love with the live feel of what we had on tape. This is how the band really sounds in performance - the intimacies along with a few of the technical problems of playing a small dry-sounding club with a stage that's not quite large enough for the six musicians. All the realness of a live performance... Making a live recording without sound separators, monitors or headphones allows the musicians to play together and listen to one another.