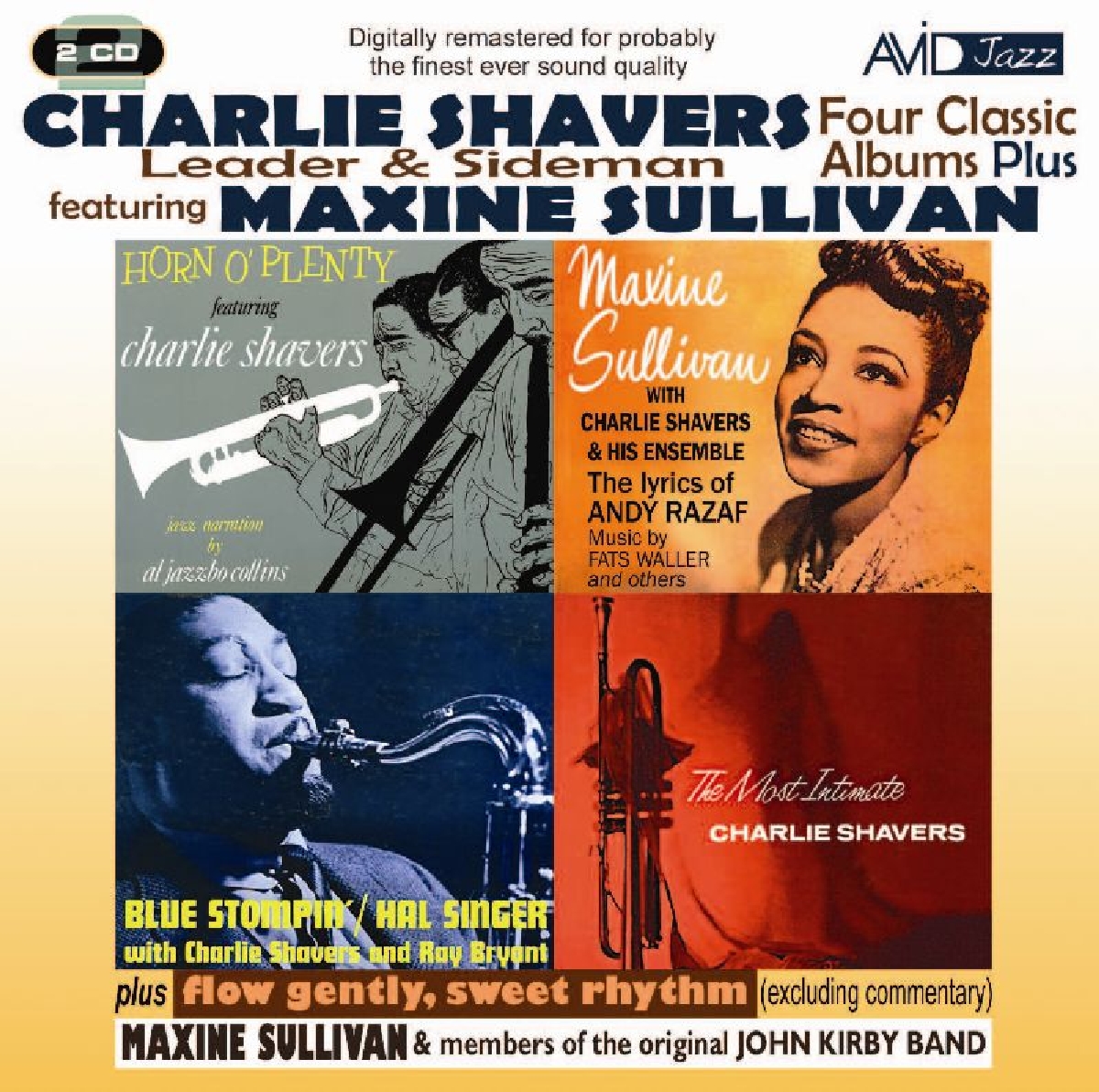 Our first album “Tribute to Andy Razaf” features singer Maxine Sullivan accompanied by amongst others, our featured artist Charlie Shavers on trumpet alongside Jerome Richardson, Dick Hayman and Milt Hinton. Andy Razaf was best known as Fats Waller’s collaborator and appropriately enough this set by Ms. Sullivan is both a tribute to Razaf and Fats! “Flow Gently Sweet Rhythm” again features Maxine Sullivan with Charlie Shavers leading the original John Kirby Band. John Kirby had been the leader of a classic sextet formed in 1938 featuring Charlie Shavers on trumpet, Buster Bailey on clarinet, Russell Procope on alto, Billy Kyle on piano, O’Neil Spencer on drums and Kirby on bass, plus a singer from Pittsburgh, a certain Mrs John Kirby otherwise known as Maxine Sullivan! Kirby had created a popular sound that was light and accessible with each musician playing a vital role in the overall sound. For this album recorded through 1954-55 the original band is joined by Specs Powell on drums and Aaron Bell on bass to replace the two deceased members, Kirby and Sullivan. From 1954, “Horn O’ Plenty” features Shavers on trumpet with Hank D’Amico on clarinet, Benny Morton on trombone, Ken Kersey on piano, Aaron Bell on bass and Panama Francis on drums. “The Most Intimate” from 1955 plays just as it says on the tin (as they say!) Charlie Shavers plays trumpet with Sy Oliver conducting the music of two of the most poetic of composers Harold Arlen and Johnny Green. It’s a unique album in that it sets a single mood due to the use of a continuous track, uniting orchestra and soloists and in particular the inventive music of Shavers. “Blue Stompin’ recorded in 1959 finds Shavers in the company of Hal Singer (who’s album this was) on tenor, Ray Bryant on piano, Wendell Marshall on bass and Osie Johnson on drums. While Singer brings his experience in the rock ‘n’ roll (or R ‘n’ B) arena, Shavers brings his concept of jazz which was steeped in the era between 1935-45 and together with an able rhythm section they make some fine, exciting and sometimes tender jazz.

All four albums plus have been digitally re-mastered.

Story of the Jazz Trumpet