Cassandra Wilson: She Who Weeps 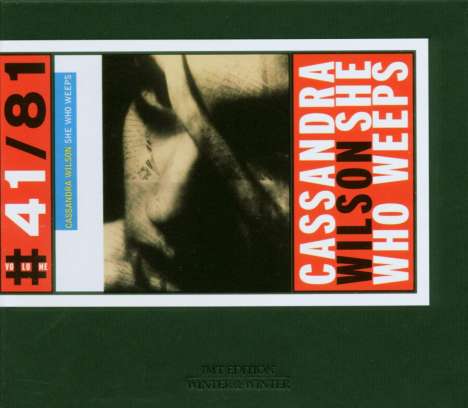 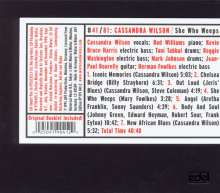 Weitere Ausgaben von She Who Weeps

+ Rod Williams,Kevin Bruce Harris,Tani Tabbal,Reggie Washin-
ton,Marc Johnson u.a.
*** 24 Bit digitally remastered
The names of great singers have been cited in order to grasp the phenomenon Cassandra Wilson. She has been compared to Anita Baker and her seductive timbre; to Ella Fitzgerald and her masterful way of interpreting pop songs; To Nina Simone and her emotional power; to Sarah Vaughan and her sonority; to Abbey Lincoln and her elegant phrasing; to Betty Carter and her vocal flexibility, wit and intelligence.

Like Betty Carter or Anita Baker, Cassandra Wilson also composes, writes her own lyrics and is her own producer and arranger. Like Abbey Lincoln, she has a strong social conscience. Yet Cassandra Wilson is unique. What makes her different from all predecessors and rivals, besides her vocal talent, is her combination of musical intelligence, social commitment, historical consciousness and wide-ranging interest in musical styles.

Like no other singer, Cassandra Wilson has practically the whole wide world of Black music at her disposition. She appreciates blues singers like Bessie Smith and Big Maybelle just like Queen Latifah or Vanessa Rubin; admits to being influenced by and admiring Public enemy, or Salif Keita, or James Brown just like Miles, Monk, or Charlie Parker.

Cassandra Wilson: Black people have invented blues, jazz, rock, soul, reggae and rap. You give different names to all these forms because they sound a certain way. But they are all interconnected; they're all part of a musical continuum. I don't think in terms of musical categories, and I don't want to be categorized.

Cassandra Wilson's first two albums Point Of View (JMT 919 004-2) and Days Aweigh (JMT 919 012-2) combine a jazz feeling with R&B, rock reggae and Latin rhythms. Blue Skies (JMT 919 018-2) is an excursion into standard territory and constituted Cassandra's international breakthrough. Since her worst fear is repeating herself, her fourth album Jumpworld (JMT 919 033-2) returned to original material, this time around with a strong funk and hiphop bent. After the science-fiction concept album Jumpworld, which bears the stamp of her M-Base musician friends, now comes She Who Weeps.

She Who Weeps. Lady sings the blues. Like her predecessor Billie Holiday - she too sang "Body And Soul", which Wilson here draws out for eleven delicious minutes - Cassandra Wilson is not a blues singer in the classic sense. But her voice is steeped in blues, contemporary blues. Cassandra Wilson thus demonstrates her connections with the great singers who came before her.

In order to grant her expressive voice as much room to unfold as possible, Cassandra Wilson chose to have herself accompanied only by a piano trio (Rod Williams, p , Kevin Bruce Harris, b, Mark Johnson, dr, or Rod Williams; Reggie Washington, b, and Tani Tabbal, dr) or guitar and bass.

In its many economy of means, the title track "She Who Weeps" makes for a particularly moving experience. It is a lullaby, written by Cassandra's mother. Her father Herman Fowlkes, whose openness and encouragement she ows much to, plays the electric five-string bass to Jean-Paul Bourelly's bluesy guitar.

The intimate, family-orientated character of She Who Weeps is underlined by "Out Loud". This song, co-written by Cassandra Wilson and Steve Coleman, a funky blues with a drum track programmed by Cassandra, is dedicated to her little son Jeris.

Billy Strayhorn's "Chelsea Bridge", with deliberately non-virtuoso scatting by Cassandra, the above mentioned lovely "Body And Soul" (set to changes reminiscent of Miles' "Blue in Green") and Aretha Franklin's "Angel" round out this engaging programme, which aims more than any of Cassandra's previous albums straight for the listener's heart.

She Who Weeps (by the way one of the titles of the great Egyptian goddess Isis) confirms Cassandra Wilson's stature as one of the very best singers in jazz today.