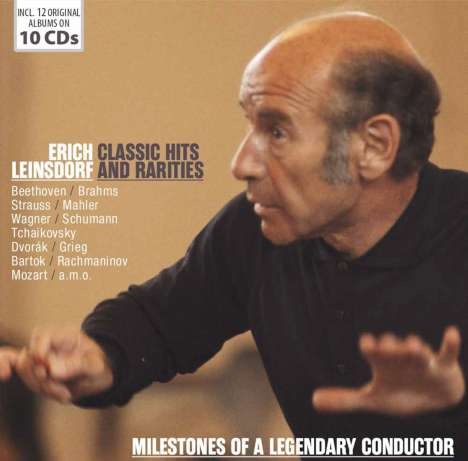 Andre Cluytens - Noble Maitre de Musique
EUR 10,99**
4 CDs
EUR 9,99*
Erich Leinsdorf (1919 - 1993) is still considered to be one of the world’s best opera conductors. His extensive recordings of the symphonic works of Mozart, Beethoven, Brahms, Prokofiev, and others are ample proof, however, that he belongs among the group of European orchestra leaders who influenced American musical life since the 1930s. Born in Vienna as Erich Landauer, he assisted the great Arturo Toscanini at the Salzburg Festival as a young conductor, and also Bruno Walter, head of the Vienna State Opera at that time. He thus came into contact with the musical world elite early on. When Austria was annexed to Nazi Germany, he was in the US, where he was granted asylum as a Jew. Initially assistant at the New York Metropolitan Opera, he became increasingly responsible for the German repertoire during the war years. In 1942 he achieved US citizenship, and from 1943 to 46 became head of the Cleveland Orchestra, interrupted only by his service in the US Army. After the war there followed remarkable and award-winning recordings in Vienna, Bayreuth, London, Berlin, Chicago, Los Angeles, New York, and in 1962 the appointment as director of the Boston Symphony Orchestra. This 10-CD box set marks the path of this extraordinary conductor in all of its crucial phases with a host of impressive examples of his work.