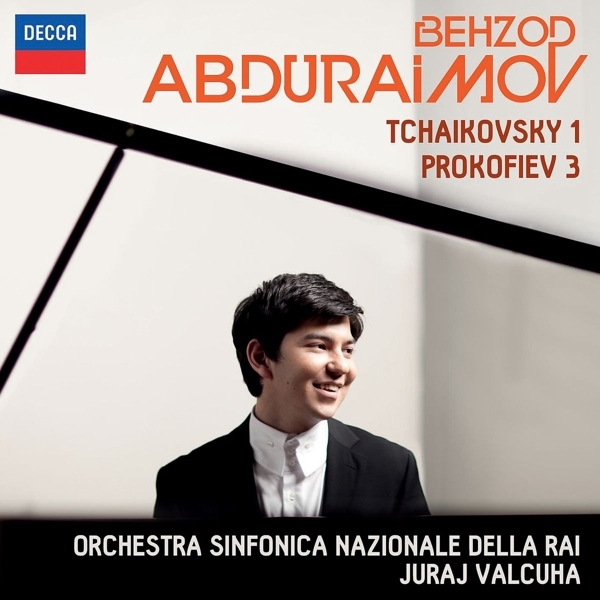 Concerto debut album couples two Russian favourites Prize winning pianist Behzod Abduraimov makes his concerto debut album with Prokofiev’s Third, the work with which he burst on to the scene in 2009, winning the London International Piano Competition as a teenager. It is coupled with Tchaikovsky’s First, offering dazzling performances of two of the most popular of all Russian piano concertos. Between the concertos is a rare recording of Earl Wild’s classic transcription of the “Dance of the Four Swans” from Swan Lake – a must for all piano enthusiasts. In the five years since his competition victory, Abduraimov’s feet have hardly touched the ground, his captivating performances rapidly establishing him as a pacesetter of his generation. On the concert platform he has worked with the world’s top orchestras and conductors, including Vladimir Ashkenazy, Valery Gergiev, Vasily Petrenko, Charles Dutoit, Vladimir Jurowski, David Zinman and Pinchas Zuckerman. He signed exclusively to Decca in 2011, releasing a debut album of Prokofiev, Liszt and Saint-Saëns in 2012 which won both the Choc de Classica and the Diapason Découverte and garnered glowing praise from the critics. “Mark the name,” said the Daily Telegraph, calling Abduraimov “an artist not only of extraordinary technical ability, but also one with a terrific musical personality and sensibility”. International Record Review said: “He has the neuro-motor responses of a jungle cat and the energy reserves of an Olympic athlete on peak form.” In May Behzod Abduraimov toured China with the Boston Symphony Orchestra under Charles Dutoit performing Rachmaninov’s Rhapsody on a Theme of Paganini. He will tour Japan in June with Rachmaninov’s Third Piano Concerto under the baton of Vladimir Ashkenazy, followed in July by Tchaikovsky’s First Piano Concerto. He is currently touring New Zealand, Australia, Japan and Singapore, with recitals and performances of Rachmaninov’s Third Concerto under Vladimir Ashkenazy. In August and September, in addition to recital programmes at the Aspen Festival in the USA and in London, he plays the Prokofiev Third in Sweden and Slovakia and Tchaikovsky’s First in Italy and France. Behzod Abduraimov’s gripping, visceral approach to music is convincing audiences worldwide: “Abduraimov seems to have it all”, writes Classicalsource. com, “an amazing technique, a musical wisdom and an intelligence of great maturity and an instantly communicated generosity of spirit.” The Independent described “a quintessential showman, but of the greatest refinement. And he just might be the new Horowitz.”