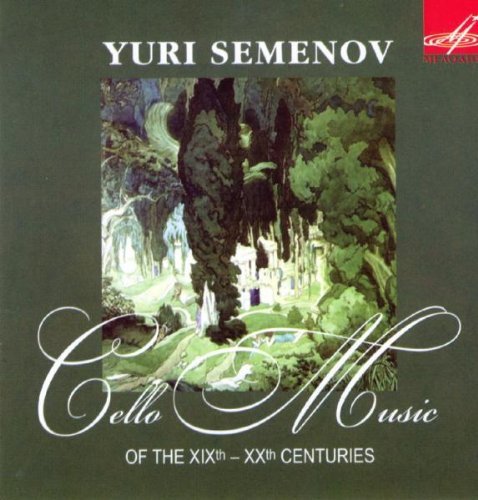 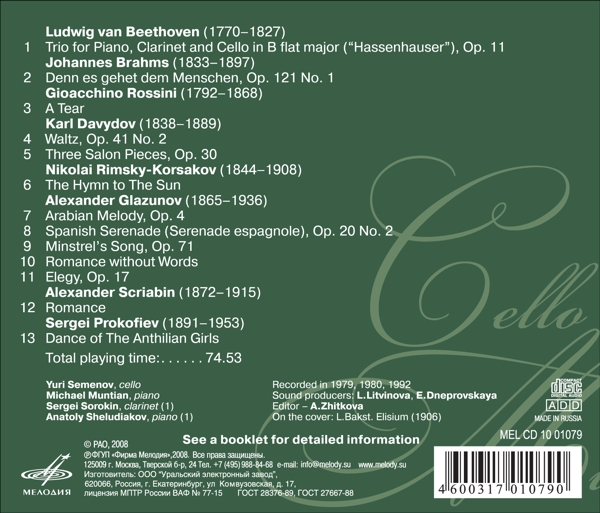 The 19th and the beginning of the 20th centuries are marked as a period of golden age of exceptional flourishing of cello music. The necessary prerequisites for it were created by firm establishment of the cello over viola da gamba in the 18th century. The expressive means of the cello were rich and technical potential was great. By the second half of the 19th century the cello had widely been used as a solo, ensemble and orchestra instrument.

The main genre trends of the cello music were defined in the creative work of Russian and foreign composers’ schools. At the beginning of the 19th century there appeared 5 Beethoven’s Sonatas for Cello and Piano that became an impulse to develop the genre of the chamber sonata for cello. This idea was taken up by many composers such as Mendelssohn, Chopin, Frank, Grieg, Saint-Saens, Fauré, who presented rather intriguing pieces of music in this genre. Concertos for cello and orchestra were not least popular and it was reflected in the works by Brahms, Dvorák, and Schumann. The works of Russian composers followed though coming a bit late. Among them there were the conspicuous concertos by A. Rubinstein, Davidov and Glazunov. Tchaikovsky created “Variations on The Roccoco Theme”, trio “In Memoriam of The Great Actor” and “Pezzo capriccioso”. The extraordinary upsurge of the cello performing art was connected with the activity of such foreign musicians as P. Casals, G. Cassadó, P. Maréchal and Enrico Mainardi. The world wide fame of the Russian cello school owes to the creative activity of the most talented celloist and teacher K. Davidov in the first place. His pupils’ names rank with the names of the most prominent performers of the world – A. Verzhbilovich, A. Brandukov, L. Rostropovich, S. Kozolupov and many others.

According to Tchaikovsky’s estimation, Davidov “was the tsar of all cellists” and he left the considerable heritage of cello compositions of small forms. His cello miniatures were mainly supposed for musical salons; therefore their lyrical features adjoin complicated technical means. This peculiarity was reflected in other chamber miniatures of the 19th–20th centuries, including Mendelssohn’s “Songs without Words”, Schumann’s pieces, Chopin’s waltzes, nocturnes, preludes and sketches, Veniavsky’s violin plays.

The contents of this programme are mainly aimed at the recreation of the atmosphere of chamber performance in the close circle of connoisseurs and amateurs. Cello music was born and developed in depths of that atmosphere. Besides Beethoven’s “Trio” that is a classical sample of this genre and Davidov’s works, “Serious Song” from Brahms’ last composition is included in the programme. This is a characteristic example of the composer’s latest style. There are also Glazunov’s works of various periods and some of his interpretations of popular works. The composer wrote “Romance without words” at the age of 16; Yuri Semenov was the first who had the piece recorded on the radio.

Within all his life Semenov devotes his time not only to performing but to teaching activity as well. He taught at Gnesins Academy of Music, in Musical Pedagogical Institute named after Ippolitov-Ivanov. At present he teaches at Anatolia University, conducts master classes abroad annually. He performs both as a soloist and a member of an ensemble in Russia and other countries of the world (Norway, Finland, Korea, Hungary, Greece, Germany). Semenov is a member of Russian and international juries of musical contests, an organizer and participant of many festivals. He has many records of solo and ensemble performance.

The outstanding pianist Michael Muntian is famous as a friend and companion-in-arms of the remarkable viola-player Yuri Bashmet. The musicians have given many concerts over the world and have had more than 20 discs recorded. In 1975 Michael Muntian and Feodor Druzhinin took part in the premiere of “Viola Sonata” by Shostakovich; that was the composer’s last work. The artist has given concerts with many home performers gaining the fame of a prominent ensemble player. The pianist and composer, Honoured Artist of Russia Anatoly Sheludiakov and the clarinetist, Honoured Artist of Russia, one of the members of the first cast of Renaissance Mosaic Trio Sergei Sorokin took part in the performance of Beethoven’s “Trio for Piano, Clarinet and Cello”. (melody. su)