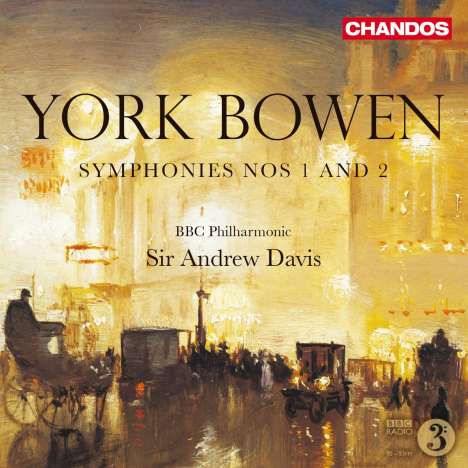 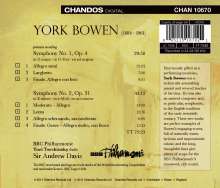 Symphony No. 1 was written in 1902 when Bowen was an eighteen-year-old composition student at the Royal Academy of Music. The work is laid out in only three movements (unusual for the time), and requires a relatively modest orchestra. It is a deeply impressive achievement – the beauty and lyricism of the second movement and its myriad of orchestral colourations, together with a unique and often surprising sense of well-being in the finale, demonstrate that here is a genuinely symphonic composer who was not content just to copy established models and appease his professors. At least one movement of this symphony was performed during Bowen’s time at the academy, but this recording may well be the first time that the work has been performed in its entirety.

When Bowen composed his Symphony No. 2 just seven years after completing his first, much had happened in the world of modern music, not least in instrumental terms with the acceptance of large orchestras as standard. As a result this work is much larger in scale than his first symphony, and performed with significantly larger instrumental forces too. The finale in particular is spectacular in the way it develops from the tiniest semi-tonal seed into a fiery and almost unstoppable flood of ‘Bowen-esque’ inventiveness. This symphony is the work of an assured composer who was completely certain in his music’s sense of direction and in the positive and life-affirming nature of his compositions.

York Bowen has a distinguished reputation as a composer and was considered to be one of Britain’s finest pianists. In his day he was known as ‘The English Rachmaninoff’, and Saint-Saëns described him as ‘the most remarkable of the young British composers’. The works of York Bowen tend to display a blend of romanticism and strong individuality, and although the influences on him include the likes of Rachmaninoff, Chopin, Grieg, and Tchaikovsky, his music is also strongly defined by textures and harmonies that are uniquely ‘Bowen’. This recording presents his only two surviving symphonies, Symphony No. 1 and Symphony No. 2, which are performed by the BBC Philharmonic under the exclusive Chandos artist Sir Andrew Davis.

“…The curious are unlikely to ever find a better introduction to Bowen’s symphonic music.” Ronald E Grames – Fanfare – November / December 2011

"...Once again, Chandos and Sir Andrew Davis have put us in their debt for unearthing these scores. Both the sound and performances are excellent." **** Greg Keane - Limelight Magazine - 22 September 2011