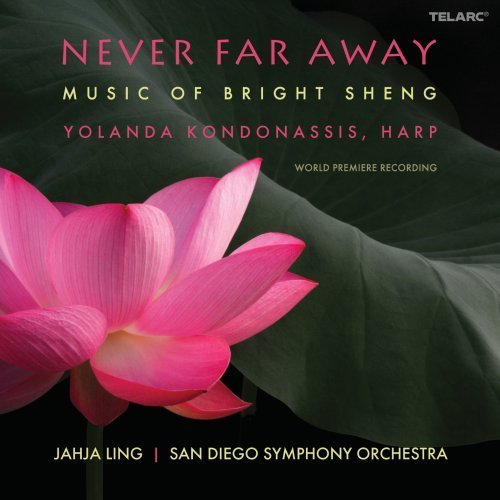 Bewertung:
Artikel am Lager
-76%
EUR 16,99**
EUR 3,99*
Telarc limitiert preiswert
Harpist Yolanda Kondonassis breaks new ground with an exciting co-commission by The San Diego Symphony, The Dallas Symphony, The Grand Rapids Symphony and Oberlin Conservatory, written by Chinese composer Bright Sheng. Never Far Away features four pieces by Sheng: “Shanghai Overture,” the short ballet “The Nightingale and the Rose,” which was inspired by a short story by Oscar Wilde, “Tibetan Love Song and Swing,” and the title piece “Never Far Away.”

Not resting on the usual “romantic” harp repertoire, Kondonassis worked closely with Sheng to highlight the power and potential of the harp. “I first spoke with Bright about this project almost five years ago,” she recalls. “I was familiar with his music and felt that his use of color, rhythm, and Asian-inspired sonorities would translate well on the harp. We met in person a short time later and had the first of what turned out to be a series of long and intense working sessions on the concerto. We share a fondness for powerful music and enjoyed unearthing new sounds and textures on an instrument that so often gets stereotyped before a composer even sets the first note on the page.”

These intense sessions led to a tour de force for harp and the centerpiece of this recording, “Never Far Away.” The piece is a wonderful concerto that stretches the instrument – at times blending such techniques as the “prepared harp” effect in the third movement (achieved by threading strips of thick paper through the entire range of strings) and the “pedal glissando” effect in the second movement, which uses the natural metallic sound that is made when sliding the pedal from one position to the next while the strings are still ringing. These techniques clearly demonstrate Kondonassis’ mastery of the instrument while also showcasing the harp in a way that is in distinct contrast to the “new-age” identity that so many people have attached to it in recent decades.

“Never Far Away” has been performed by The San Diego Symphony, The Dallas Symphony and The Grand Rapids Symphony at this point and has received high praise. The Dallas Morning News praised Kondonassis as “a brilliant and expressive player” and described the work as one that encompasses everything from “wide-screen luxury” to “Asian-flavored boogie-woogie.” “Kondonassis was called upon to use her extraordinary technique and powerful tone,” said the Grand Rapids Press. “But not just any harpist would pull this off so elegantly.” Sheng’s three-movement work is inspired by the idea that, if your native culture is still the inspiration for your work, you are never far away from home.

The disc also features Sheng’s ballet “The Nightingale and the Rose,” composed in 2006 during his residency with the New York City Ballet. The piece was inspired by the Oscar Wilde short story of a nightingale that befriends a love-struck student enamoured with the daughter of his professor.

Rounding out the program is “Tibetan Love Song and Swing,” a new suite combining two previously composed individual works. La’i for Orchestra without strings was co-commissioned in 2004 by the Philharmonisches Orchester Dortmund (for the German orchestra’s centennial celebration) and the University of Michigan Symphony Band. Sheng later added strings to this work to serve as the first part of the suite, renaming it Tibetan Love Song.
(concordmusicgroup. com)