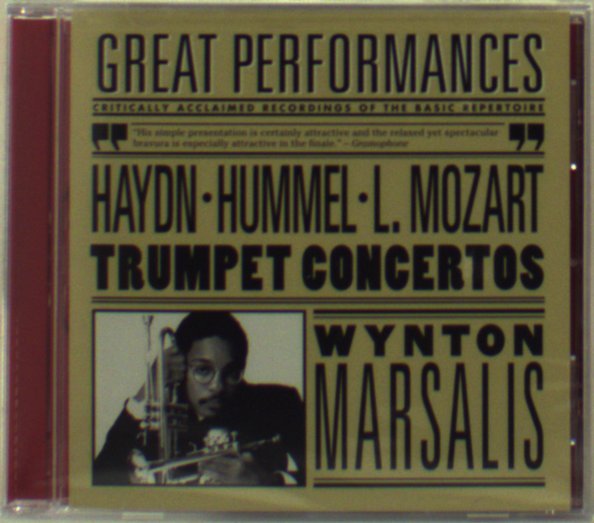 Bewertung:
lieferbar innerhalb 1-2 Wochen
(soweit verfügbar beim Lieferanten)
-21%
EUR 13,99**
EUR 10,99*
For mountain climbers, the Himalayas; for classical trumpet players, the Haydn, Hummel, and L. Mozart trumpet concertos. The young Marsalis tackles the climb with virtuosic technique and clarion tone. Wynton’s1983 Grammys for this recording and THINK OF ONE…made him the first and only artist to win classical and jazz Grammy Awards in the same year. This recording also marks the beginning of Wynton’s collaborations with the distinguished conductor Raymond Leppard, here leading the National Philharmonic Orchestra.

Franz Joseph Haydn (1732-1809) composed his only concerto for trumpet in 1796. The E-Flat Major Concerto was written especially for Anton Weidinger, court trumpeter to Prince Anton Esterhazy. Haydn began his association with the princely Esterhazy family in 1761 and continued in their employ until his retirement in 1790.

Johann Nepomuk Hummel (1778-1837) also composed his Concerto in E-Flat Major for Trumpet and Orchestra for Anton Weidinger. Hummel succeeded Haydn as Kapellmeister in the court of the Esterhazy family, and his Concerto was first performed for them on New Year’s Day, 1804.

Leopold Mozart (1719-1787) composed an extensive list of music during his lifetime but is generally represented in today’s record catalogues by a mere handful of works, along which usually can be found his Musical Sleigh Ride and the Concerto in D Major for Trumpet and Orchestra. The latter work was written in 1762 and is an increasingly favorite piece of virtuoso trumpeters.