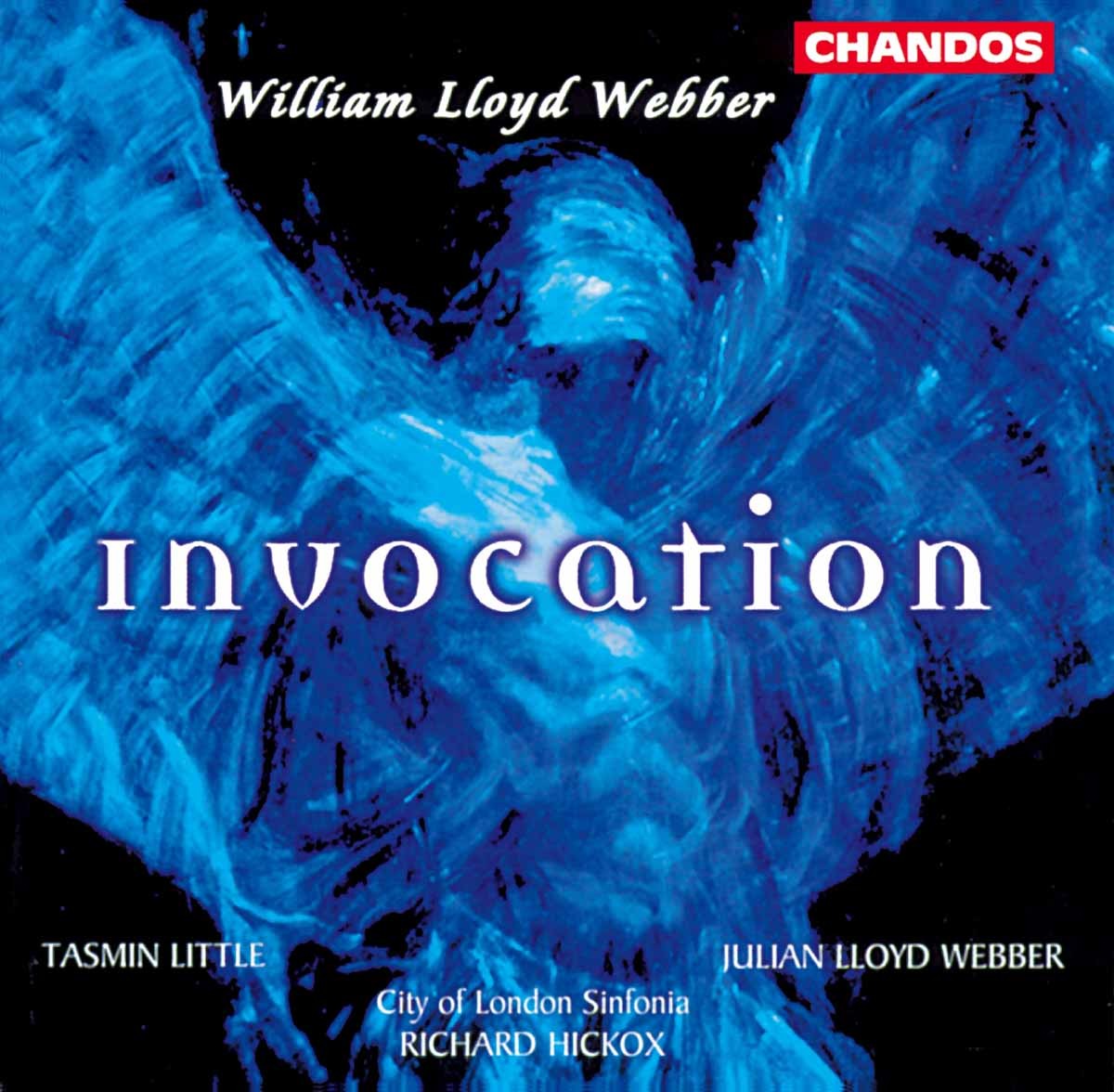 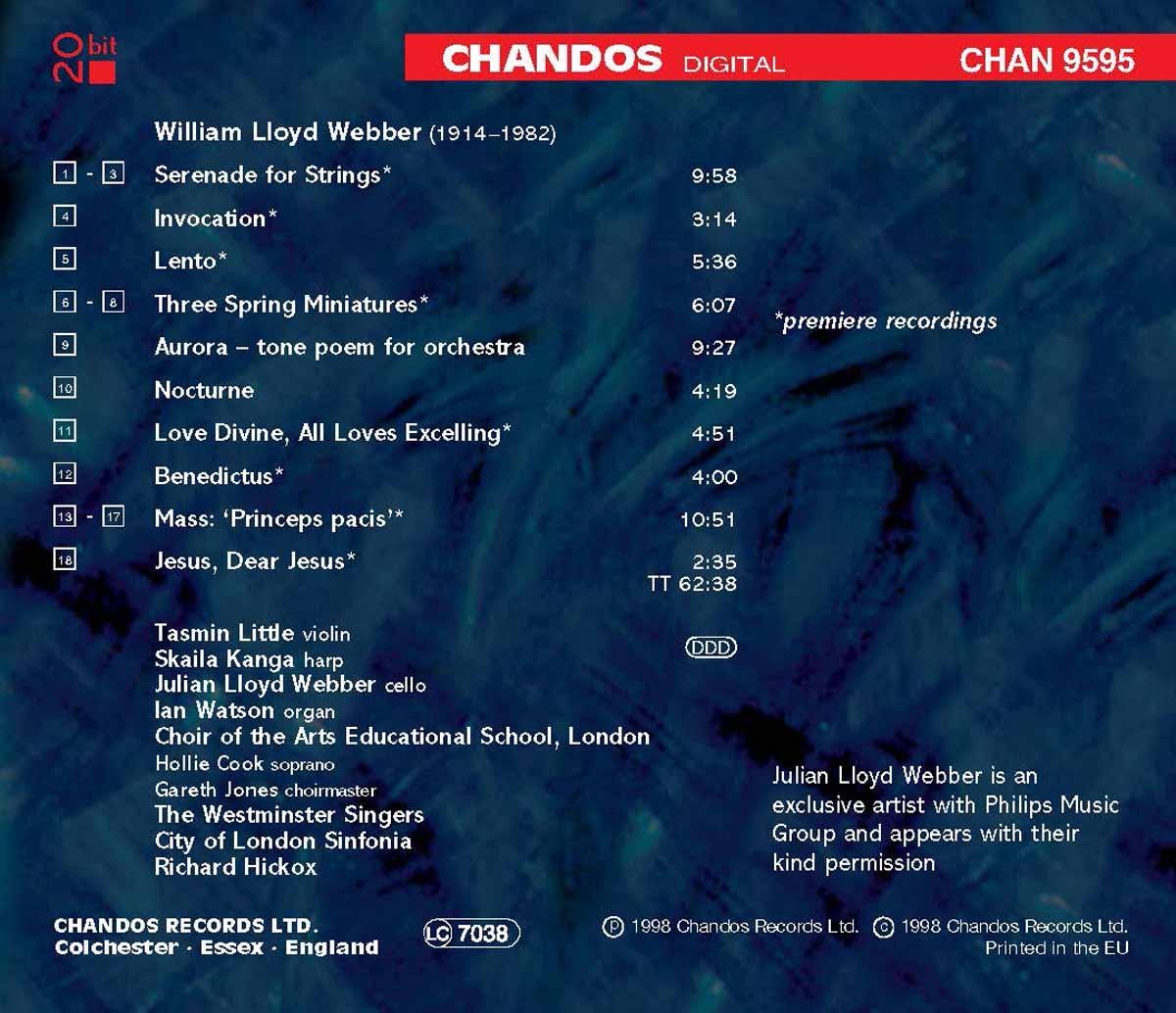 The music of William Lloyd Webber is highly melodic and attractive. The works features on this album span a wide variety of genres, making for an extrememly interesting portrait disc of this fascinating British composer. With the exception of Aurora and the Nocturne, al the works featured on this album are premiere recordings.

The fact that William Lloyd Webber chose to keep his intensely melodic music ’under wraps’ can be attributed to the critical climate of the 1950s and 1960s, when post-Schoenbergian serialsm was then in vogue, and anything remotely tonal was consistently rubbished in the press. Now, thankfully, times have changed and we can appreciate fully what a marvellously enjoyable and imaginative composer he was.

The Serenade for Strings is a more substantial work than its title suggests. The three movements were originally composed in 1951, 1980 and 1960 resectively, yet the work sounds very much like a unified whole. The Barcarolle began life as a song, telling of an enchanted boat with a cargo of ’pearl and silver beams to fashion the little childrens dreams’, whilst the lyrical Romance, a favourite work of the composer, was written for his close friend, Justine Bax. The Elegy was originally a wind and piano composition written for his eldest son Andrew who was then studying the horn; it is not at all a sombre piece, and its original subtitle »A Fresian Elegy« gives a better idea of the work’s character.

Invocation (1957) shows Lloyd Weber at his most straightforward and emotional, with a beautiful heartfelt theme in E major, which defies anyone not to respond to it. Equally intense is the Lento in E major which enters into the world of Mahler with its rich, chromatic harmonies; it is suprising to learn that it is an earlier work, composed in 1939. The Three Spring Miniatures were originally piano compositions written in 1952 but later arranged for a chamber orchestra (as recorded here). They are subtle and charming compositions which are most enjoyable. Aurora, on the other hand, is a much more complex and imposing work. Completed in 1951, it is a skilfully scored tone poem which enters the sound-world of Delius, Sibelius and Rachmaninov. It is best understood by a programme note the composer wrote for a student performance at the London College of Music: »Arriving from the East in a chariot of winged horses, dispelling the night and dispersing the dews of the morning, Aurora was the Roman Goddess of the Dawn. This short tone poem attempts to portray ... the inherent sensuality of her nature.«

The Nocturne, from Lloyd Webber’s oratorio St Francis of Assisi (1948), is recorded here for the first time in its original version for cello and harp; he presented it to his son Julian, just before his death.

Love Devine, All Loves Excelling (1964) for choir and organ starts off deceptively simply, yet builds up to a suprisingly powerful climax for the final »Amen«. The Benedictus was written by Lloyd Webber for him and his wife Jean, a fellow student at the Royal College of Music, to play at their wedding service in 1942. It is a haunting work which deserves to be much better known. The beautiful Princeps pacis for choir and organ, was composed for the choir of Westminster Abbey and was first performed there in 1962. Jesus, Dear Jesus is one of his most innocently charming works. It was written for the children of Wetherby School where Jean Lloyd Webber taught for many years and where both Andrew and Julian were pupils. For this recording a children’s choir was engaged to perform this work as it was felt to be more in keeping with the spirit of the music.

»...The 10 works on this disc show him [William Lloyd Webber]to have been a composer of distinctive quality wo could rise to ecstatic heights... The most moving of the lovely choral pieces is Princeps pacis, a short mass written for Westminster vathedral choir in 1962 ... Chandos deserve our thanks for bringing this beautiful music back into circulation.« The Sunday Telegraph - 7 June 1998

»... a revelation: partly because the music ...is so memorably well crafted... Hearing this disc, even the most sceptical listener would have to admire the seductive gift for melody...« Michael White - Independent on Sunday - 19 June 1998

»...I find WLW’s music appealing myself; his writing ... is succinct and graceful, particularly in the church pieces that conclude this disc ...Chandos has rounded up some top-notch performers to play it for this collection ...« Raymond - American Record Guide - November / December 1998