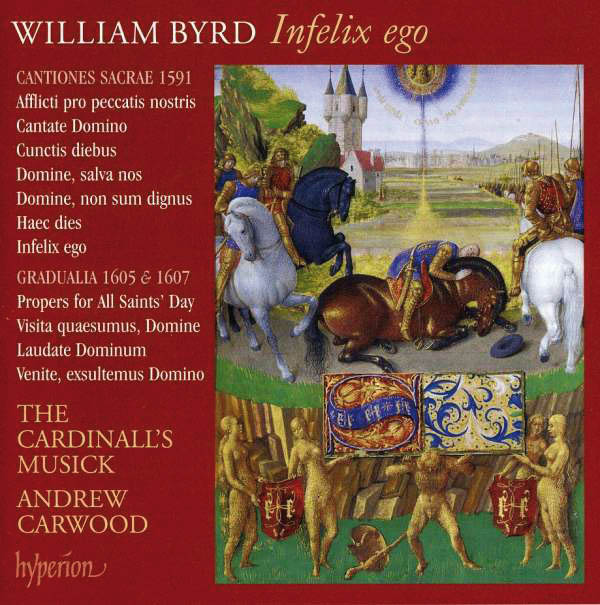 The Cardinall’s Musick’s award-winning Byrd series reaches its final volume, which includes some of the composer’s most sublime and adventurous music, drawn in the main from the 1591 Cantiones Sacrae collection. Throughout this series it has become evident that a comprehensive survey such as this shows the genius of the composer in a uniquely effective way: by demonstrating the extraordinary variety and unsurpassable quality of his musical and liturgical achievements. Andrew Carwood defines Byrd as the greatest composer of the age in his booklet note—as he writes: ‘If there is an English musician who comes close to Shakespeare in his consummate artistry, his control over so many genres and his ability to speak with emotional directness it must be William Byrd.’

The ‘title track’ of this volume, Infelix ego, is the crowning glory of Byrd’s achievement as a composer of spiritual words and one of the greatest artistic statements of the sixteenth century. This remarkable text, taking the form of a number of rhetorical statements and questions, shows the whole gamut of emotion from a soul in torment—guilt, fear, embarrassment, anger, but crucially the gift of release when Christ’s mercy is accepted. It can be seen as a microcosm of Byrd’s sacred music and a fitting crown to this series.

'Hyperion has done Byrd proud … It's a mixture also of the celebratory, as though the singers were congratulating themselves on a job well done - as well they might - and the pentitential, concluding with the full ensemble in a finely judged and quite extrovert Infelix ego, surely one of Byrd's most memorable motets … The commitment of singers and label alike is a cause for gratitude, perhaps even optimism. Congratulations to all concerned' (Gramophone)

'The Cardinall's Musick pays tribute to the whole landscape of Byrd's genius with a passion that ends the project on a high. As with the earlier instalments, Andrew Carwood's direction and programming are equally inspired … The centrepiece is the searing Infelix ego; here, the recusant Byrd explores a martyr's preparation for death, taking the listener through every emotional extreme before transcending the built-up tension in a glorious coda. The musical imagination of The Cardinall's Musick does full justice to that of Byrd. Unique about this ensemble is its expressiveness, whether members sing seamlessly as one or tug at each other's lines. The group's delivery is a sensual delight' (BBC Music Magazine)

Propers For The Feast Of All Saints