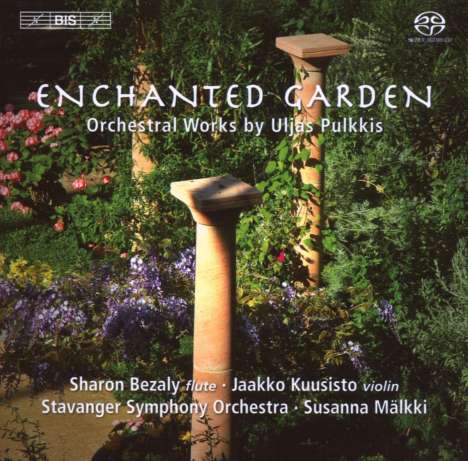 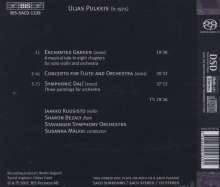 lieferbar innerhalb einer Woche
(soweit verfügbar beim Lieferanten)
EUR 19,99*
Versandkosten
n spite of his youth, Uljas Pulkkis (b. 1975) is firmly established in Finnish music. A number of his compositions have won prizes in competitions, such as the Queen Elisabeth competition in Brussels (for ’Tears for Ludovico’) and the Gustav Mahler competition in Klagenfurt (for ’Duett für eine’). The title work of the present disc, Enchanted Garden, is another example: subtitled ‘a musical fairy-tale in eight chapters’ this work was singled out by UNESCO's International Rostrum of Composers 2001. The solo violin – the work is sometimes described as a violin concerto – is the narrator whom the orchestral musicians comment upon and react to, and the ’fairy-tale’ itself tells of happenings from sunset to sunrise in a magical garden. The highly colourful writing in Enchanted Garden is characteristic of an early phase in Pulkkis’s development, a phase of which the work forms both the climax and the conclusion. In the following Flute Concerto, composed for Sharon Bezaly who performs it here, Pulkkis has turned full circle and uses material which, he himself claims, is as straightforward as possible. Especially in the outer movements one finds traces of a neo-classical style reminiscent of Honegger or Hindemith, though filtered through the composer’s very personal vision. The disc closes with Symphonic Dalí, a three-movement work which is the largest that the composer has written for orchestra to date. The three ‘paintings’ have the titles The Colossus of Rhodes, Shades of Night Descending and Dawn, and given the association with Salvador Dali, it is not surprising that Pulkkis in this work again changes direction, bathing the music in a Mediterranean light of Ravellian stamp.

With these three highly varied works, the programme forms a kaleidoscopic picture of a highly interesting young composer. The concertante works are championed by soloists Jaakko Kuusisto and Sharon Bezaly, both of whom played the respective first performances. They are supported by Susanna Mälkki, conducting the Norwegian Stavanger Symphony Orchestra, whose previous recordings of the music of Harald Sæverud and Geirr Tveitt have been highly acclaimed, and who here steps across the border to neighbouring Finland.