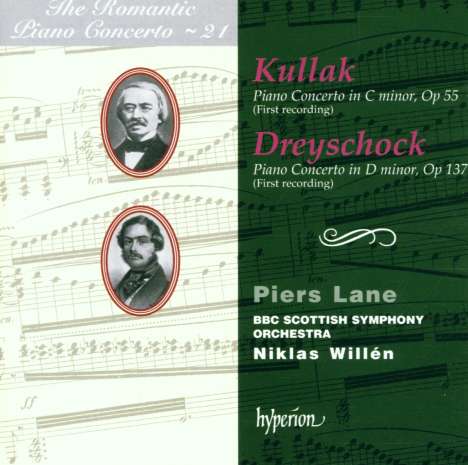 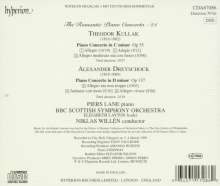 Dreyschock and Kullak are today only footnotes in the biographies of those who emerged from the nineteenth century as giants of the musical world, but in their time both artists were very significant indeed.

Both were pianists (and born in the same year) but had very different careers. Dreyschock seems to have been a bit of a showman and played loud and fast, he made a speciality of his left hand work and was one of the first to compose for this esoteric medium. His large output of compositions seem never to have made much impression and it is now purely as a performer that he is remembered. His only Concerto (not to be confused with his Concertstück once recorded on LP) is rather Mendelssohnian and has a particularly energetic finale.

Although by all accounts also a superb virtuoso Kullak gravitated towards teaching and became perhaps the most prolific teacher of the nineteenth century century; he eventually founded his own Academy in Berlin which had a roll of around 1000 piano students at its peak.

His only Concerto was published in 1855 and is quite conservative for its time, though it may have been written earlier. It clearly derives from the tradition of Hummel and contains much brilliant finger work interspersed with a lyricism very reminiscent of Chopin. It may not be profound, but it is both beautiful and entertaining and must surely be one of the most enjoyable ›lost‹ concertos around.

»Delightful concertos. Kullak's in particular strikes me as a gem. Piers Lane plays both with dexterity and wit. A winner« (The Sunday Times)

»I can't stop playing the disk: the anticipation of a number of ear-tickling passages, notably in the Kullak, is too delicious for words. Effervescent, lightweight music transformed into entertaining and compelling minor masterpieces« (Classic CD)