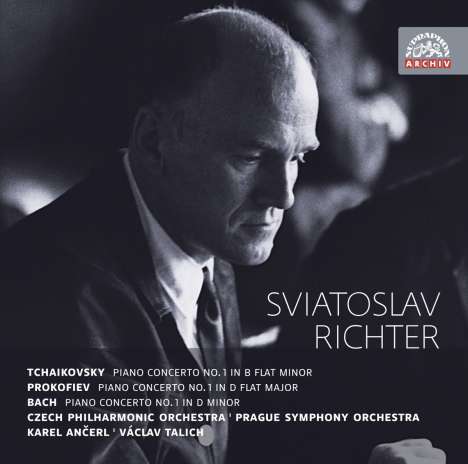 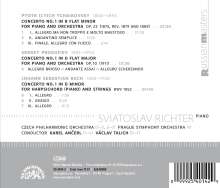 In 1950 Prague was the destination of the first-ever foreign trip of the then 35-year-old Russian genius pianist Sviatoslav Richter. He would subsequently visit the city on several more occasions. The recordings on this CD were made at the Rudolfinum within two weeks at the end of May and the beginning of June 1954. Richter is accompanied by the two finest Czech orchestras, conducted by two true legends - Vaclav Talich (nearing the end of his career) and Karel Ancerl (at the beginning of his tenure in the post of principal conductor of the Czech Philharmonic Orchestra). Within such a short time, Richter had mastered Tchaikovsky's impassioned concerto in B minor, Prokofiev's purely Neoclassical concerto in D flat major, as well as Bach's paramount Baroque and timeless first piano concerto. The fact that the Russian composers Tchaikovsky and Prokofiev found an ideal interpreter in perhaps the greatest legend among 20th-century pianists appears entirely logical. Yet the superb and sensitive performance of Bach's piano (originally harpsichord) concerto serves to complete the picture of Richter's genius and versatility. These qualities are showcased in our new, sensitively re-mastered version of the legendary recordings.