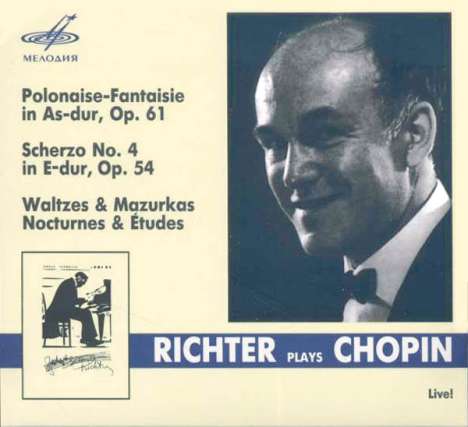 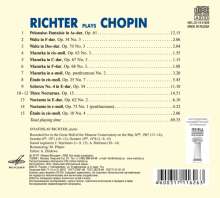 “Chopin’s works must be played in such a way that it will result in something unexpected: in this case it will be fine”.
Svyatoslav Richter

(From Jacob Milstein’s book “Following the talk with Svyatoslav Richter”)

Chopin’s works became some kind of leading light on Svyatoslav Richter’s way as a performer. As the great pianist recollected his love for music was born as a result of the impression that he received from his father’s playing of Chopin’s Nocturne in Fis-dur. When Richter was 19 (he started his career of a pianist rather late) he compiled the programme of his first recital with Chopin’s compositions. It was not a random choice. The matter was that a year earlier Richter was at David Oistrach’s recital in Zhitomir when Forth Ballad was performed by Vsevolod Topilin, Oistrach’s first accompanist. Charmed by the music Richter stated to learn the ballad, then Forth Scherzo and other miniatures of the Polish composer. Later many of the plays that were performed at Richter’s debut concert that took place in Odessa Engineers’ House in May of 1934 were included in the collection that got the name Richter’s “Chopiniana”. It was made of: Polonaise Fantasy, Third and Forth Ballads, Barcarole, Second and Forth Scherzo, Prelude in cis-moll, Op. 45, Nocturnes in b-moll, Op. 9 №1 and in F –dur, Op. 15 №1, Polonaise in cis-moll, Op. 26 №1; Waltz in As-dur; some Etudes from Op. 10 and 25 and other works.

In contrast to majority of pianists Chopin’s music occupies a rather modest place in Svyatoslav Richter’s repertoire. As writer Victor Delson noticed, Richter “has a pure enlightening inclination to play not well known and often performed pieces of music but little known and seldom performed ones”. Works of other composers such as Debussy and Beethoven took up a considerately stable position in the concert programmes throughout his performing activity. It was a different case with Chopin: after the rocketing success on the concert stage Richter digressed from performing Chopin’s works. However, he turned back to the composer’s creative works in the last years and never gave up performing them.

Delson called Richter’s style of performing Chopin’s works the style of “monumental Chopin”. The first sounds of Polonaise Fantasy that begin the Chopinian part of the programme of one of the four October recitals in 1976 characterize this feature to the best. The programme was crowned with the large scale Forth Scherzo – the listeners noticed an unusually whole melodic line in its performance. Goldenweiser wrote: “Chopin’s Forth Scherzo is often played as a mess and separate passages; meanwhile, from the first up to the last sound it represents one ceaseless melodic line similar to the one Wagner dreamed of”. Nocturne in Fis-dur is the most conspicuous piece on this disk – the one that made the indelible impression on the future musician. Richter called this nocturne an unusual one, containing something weird or mysterious. The last but not the least: Etude in cis-moll, Op. 10, the favourite encore of the great Russian pianist, completes the programme.

“My favourite composer is the one whose work I am playing now”. Svyatoslav Richter