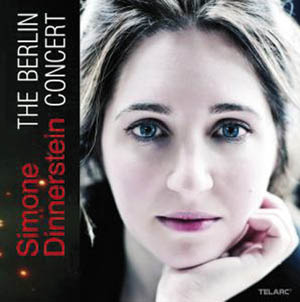 American pianist Simone Dinnerstein will release her second album on Telarc on August 26 in North America and Germany, and September 29 in the UK and France. The CD is a live recording of Ms. Dinnerstein's recital debut at the Kammermusiksaal of the Philharmonie in Berlin, which took place on November 22, 2007. The program features J. S. Bach's French Suite No. 5 in G major, BWV 816; the world premiere recording of American composer Philip Lasser's Variations on a Bach Chorale; and Beethoven's landmark Sonata No. 32 in C minor, Op. 111. Grammy Award-winning engineer Adam Abeshouse is the producer and engineer for the CD.
Dinnerstein chose this program because of how the pieces speak to each another, and because of their relationship to the music of Bach. »My hope with this concert was to program a group of pieces that would contrast with and relate to each other, despite being separated by hundreds of years, « she explains. »So much music written since Bach has been influenced by him, and the Beethoven and the Lasser recorded here are no exceptions. Philip Lasser's variations on the very dark Bach chorale, Nimm von uns, Herr, du treuer Gott (Take from us, Lord, Thou faithful God), draw on Bach's intense and meditative side. Lasser's writing is intricately crafted and encompasses a range of styles, from a contrapuntal energy reminiscent of Bach, to French Impressionism and even jazz. Beethoven's Opus 111 sounds surprisingly contemporary in this company. The first movement looks ahead to Liszt and the second movement, with its set of variations on a chorale-like arietta, looks back to Bach and ahead to jazz. All three works are densely layered, but also have a sense of freedom and directness of expression. Though they span almost 300 years, in many ways, to me, they each feel grounded in the present.«
Of Dinnerstein's performance of Beethoven's Op. 111 during the March 2007 Bach Festival of Philadelphia, The Philadelphia Inquirer raved: »Emotionally, intellectually and technically, this music couldn't be more demanding, and Dinnerstein's performance was in a league with any of the great Beethoven pianists of our time . . . I've heard Dinnerstein play fine performances, but none with the thunderbolt-hurling confidence of this one.«
Dinnerstein has gained an international following since the remarkable success of her recording of the Goldberg Variations, released on Telarc in August 2007. The album, her solo CD debut, earned the No. 1 spot on the U. S. Billboard Traditional Classical Chart during its first week of sales and has remained highly ranked since then. In recent months, she has been featured in Gramophone, BBC Music Magazine, Classic FM Magazine, The New York Times, Slate. com, The Daily Telegraph, The Independent, The Guardian, and the Frankfurter Allgemeine Zeitung, among others, and has appeared on radio programs including BBC Radio 3's In Tune, NPR's Morning Edition, Public Radio International's Studio 360, American Public Media's Performance Today, Minnesota Public Radio, as part of the news on SIRIUS Satellite Radio's The Howard Stern Show, and on national television in Germany.
In today's classical music and recording industry climate, it is rare that a debut album from a relatively little known artist generates such an enthusiastic response from the public and the media. The New York Times chose the disc as one of the Best CDs of 2007, describing it thus: »An utterly distinctive voice in the forest of Bach interpretation, Dinnerstein brings her own pianistic expressivity to the ›Goldberg‹ Variations, probing each variation as if it were something completely new.« Slate. com raved: »Dinnerstein is a throwback to such high priestesses of music as Wanda Landowska and Myra Hess . . . [She] is touring. Go hear her, and get religion. And if you can't, there's always the record.« Piano Magazine called the disc, »precisely the kind of playing that the early 21st century most needs, infused as it is with a deep and pervasive sense of beauty and tenderness of heart which is often profoundly affecting.«
Since 2005, when she performed the Goldberg Variations in her New York recital debut, Dinnerstein's career has taken off in a significant way. In addition to her debut in Berlin, during the 2007-2008 concert season, she gave debut recitals at London's Wigmore Hall and at the National Philharmonic Hall in Vilnius. She has toured with the Dresden Philharmonic under Rafael Frühbeck de Burgos and with the Czech Philharmonic under Leoš Svárovský, and will perform with the Jerusalem Symphony Orchestra in Jerusalem. Dinnerstein and cellist Zuill Bailey performed the complete Beethoven Sonatas at The Metropolitan Museum of Art in October, and repeated the program at the National Gallery of Art in Washington, DC, in late April. She will also make her debuts in San Francisco in May, at the Aspen Music Festival in July, and at the Ravinia Festival in August performing the Goldberg Variations. Highlights of Dinnerstein's 2008-2009 season include debuts in Bremen, and at the Stuttgart Bach Festival, and performances with the Stuttgart Radio Symphony Orchestra, the New Jersey Symphony Orchestra, the Orchestra of St. Luke's, and Kristjan Järvi's Absolute Ensemble. In the spring of 2009, she will make her recital debut at the Kennedy Center for the Performing Arts in Washington, DC.
Since 1996, Dinnerstein has played concerts throughout the United States for the Piatigorsky Foundation, an organization dedicated to bringing classical music to non-traditional venues. Among the places she has played are nursing homes, schools and community centers. Most notably, she gave the first classical music performance in the Louisiana state prison system when she played at the Avoyelles Correctional Center. (concordmusicgroup. com)