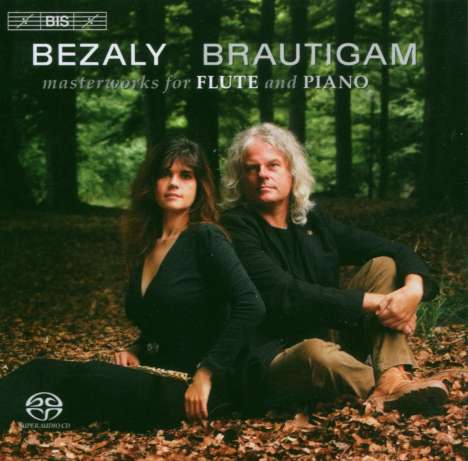 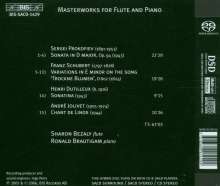 versandfertig innerhalb von 1-3 Tagen
(soweit verfügbar beim Lieferanten)
EUR 19,99*
Versandkosten
Recently released recordings of Mozart’s concertos, of three contemporary works for flute and orchestra and of a programme for solo flute have earned Sharon Bezaly epithets such as ‘God’s gift to the flute’, ‘an amazingly talented performer’ and ‘a First Lady among equals’. Here she has turned to some of the central works for flute and piano, and with Ronald Brautigam, familiar from many BIS releases, gives her interpretations of three master-pieces of the 1940s flanking Schubert’s great Trockne Blumen variations, composed some 120 years earlier. Though written in the span of two years, Prokofiev’s Sonata, Dutilleux’s Sonatine and Jolivet’s Chant de Linos each show the flute in a different light.

Prokofiev was preoccupied with clarity of style and found the instrument a perfect vehicle: ‘The sonata should be played with a bright, transparent, classical tone’, he wrote. (David Oistrakh later convinced the composer to create a violin version, which quickly became very popular.)

A distinctly different approach was taken by Jolivet, who wrote his Chant inspired by the ancient Greek concept of ‘linos’, a ritual lament punctuated by cries and dancing. It is thus based on musical material associated with Greek modes and explores the extremes of expression.

Dutilleux, finally, composed his Sonatine as a set piece for the flute competitions of the Paris Conservatoire. But these academic-sounding origins are belied by the by turns atmospheric and spirited writing, so typical of the multi-faceted Dutilleux.

Sharon Bezaly and Ronald Brautigam have previously collaborated on BIS-CD-1439, with violist Nobuko Imai. Upon its release this disc received a number of distinctions and highly favourable reviews, not least because of the superb ensemble playing.

"Anyone who has yet to encounter the playing of the astonishing young flautist Sharon Bezaly should do so without delay." Classical fm 05 / 2006

"Sharon Bezaly plays with a crystal clear, resonant tone, impeccable intonation and technique and tastefully timed - if occasionally slowish - vibrato. She and Ronald Brautigam have an almost supernatural sympathy together, ,,," Musicweb-international 05 / 2006