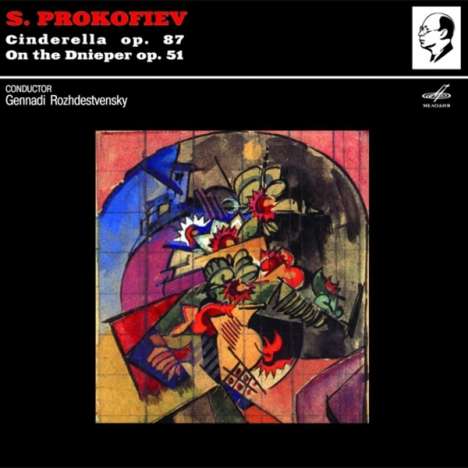 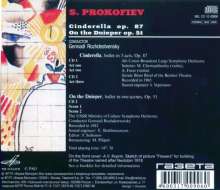 Ballet "Cinderella"
The ballet "Cinderella" was composed by S. Prokofiev when he already wag mature composer. An author of experimental ballets composed for S. Dyagilev's theater company of choreographic drama "Romeo and Juliet", at that time he was eager to create a large classical ballet with Lyrical adagio, sophisticated variations, actional pantomimes and different suites.

The plot of the fairy-tale pleased his artisitic taste — Ch. Pierrot's tale belonged to the gallant epoch in which Prokofiev had been drawing genre models and stylistic techniques since his young years. However, now he strived to animate his heroine, to reveal the inner world of her soul, and solely gallant atmosphere, sophisticated courtesy or dancing devices obviously could not suffice for this purpose. Once he had already managed to convey psychological portrait of his character in Romeo music, now he intended to accomplish the following task — to express poetic love of Cinderella and Prince: birth and blossom of this feeling, obstacles on its pace, fulfilment of the dream (S. Prokofiev On "Cinderella" S. S. Prokofiev. Materials, documents, memoirs. Selection of articles. — Moscow, 1956. P. 121).

Galina Ulanova recalls her meeting with the composer and his words. Before "Romeo" S. Prokofiev 'did not believe that this art is able to embody music and fiction images to such a full extent, [but] now his attitude to ballet has completely changed, and he would like to compose real, large and humane music for his new performance' (G. Ulanova, Author of Favourite Ballets, S. S. Prokofiev. Materials, documents, memoirs. Selection of articles.— Moscow, 1956. P. 268). And "Cinderella" turned into light, lyrical fairytale ballet with very Prokofiev-style poetic music, which is melodically generous and filled with choreographic sketches.

S. Prokofiev wrote about his new ballet: It was very important for me to make the ballet "Cinderella" very dance-like with varied dances following the plot so that the ballet actors have enough opportunities to dance and show their skill. I wrote Cinderella in compliance with classic ballet traditions, it includes pas de deux, adagio, gavotte, several waltzes, pavana, passepied, bourree, mazurka, galop. All characters have their individual variations (S. Prokofiev On "Cinderella" S. S.Prokofiev. Materials, documents, memoirs. Selection of articles. — Moscow, 1956. P. 121).

The idea of 'dancing' ballet revived large, expanded forms which are typical for P. Tchaikovsky and A. Glazunov ballets. Thus, final "Amoroso" in "Cinderella" became an adagio which can be compared with final adagio in "Swan Lake" or "Raimonda". S. Prokofiev employed composition structures of classic ballets: classic valuations, adagio, Pas-d'action. Suite was made a supporting framework of the ballet. Each of the three acts is built on the suite like an arch locked with a keystone. The suite of fairies in Act I is similar to Act I of the ballet "Sleeping Beauty" by P. Tchaikovsky. The suite contains varia¬tions of four fairies impersonating four seasons connected with the theme of Fairy the Beggar. Music of variations which is not connected with narrative outline is performed in the style of landscape sketches with subtle use of Impressionist musical imagery. Instead of joint coda dance the suite is finished with Cinderella's waltz (No. 19, "Cinderella's departure for the ball").

The suite of Act II leans towards typical suite of classic ballets. There are old dances in the suite — Court dance in pavana-style, passepied, bourree, sisters' variations. Beside character suite. Act II includes classical Pas de deux, the parts of which arc dispersed due to comparison with genre and character scenes, and lyrical, comical episodes: Big Waltz, Variations of Cinderella and Prince, their duct and Waltz-Coda.

Act III is based on fairy-tale rondo-suite accomplished like final Grand-pas in spectacular ballets (for example, in Act III of the aforementioned "Sleeping Beauty"). Prince's galops are a refrain of the suite, and its epi¬sodes are scenes of trying on the shoe.

Dancing principle, a priori intrinsic to Prokofiev's music of every genre — to his instrumental, orchestral or vocal works, manifested itself most fully in his best ballets "Romeo and Juliet" and "Cinderella". The theme of each character of at least any individual significance demonstrates gesture details, the state of mind and even their gait — everything which is associated with motion and, consequently, with dance.

"Cinderella" proved Prokofiev's skill as a portrait-painter: individual image of the heroine is revealed not only with dancing characteristics but also with her leading themes which were indicated and named by the composer himself. The first theme is "Offended Cinderella", the second one is "Pure and dreamy Cinderella", the third theme is "Happy Cinderella in love". The first theme starts a ballet introduction, the second theme bears romantic dream about happiness (it becomes joyful and delighted in No. 36, "Duet of Prince and Cinderella" — classical adagio, and expands into elevated love poem in No. 50, "Amoroso"), and the third theme (broad in a Russian style, based on С major triad) declares that the world of her dream unveiled itself for Cinde'rella. These themes underlie music canvas of numerous ballet scenes including famous waltzes. Developed system of lead¬ing motifs, as well as in "Romeo and Juliet", manifests Prokofiev's endeavor 'to sympho-nize' this genre.

While Classicism dances in the ballet could be easily integrated into either daily or ceremonial sphere and could characterize them, lyrical feeling required its expression in the waltz which in the 19th century was considered the dance causing unreserved confessions. Its apparent indiscrepancy with the time spirit could be best combined with development of the ballet main dramatic line.

The waltz, being rich with traditions in ballet and orchestra works from M. Glinka and up to P. Tchaikovsky, became a leading genre in music characteristics of the heroine. In contrast to dancing characteristics of the stepmather, the sisters and the courtiers, it gives an eternal character to the lyrical sphere of the ballet. Three perfect masterpieces of this genre turned into three climaxes of the ballet. One could call them 'a waltz of dream' — No. 9, "Cinderella's dreams about the ball"; "Waltz of Hope" — No. 19, "Cinderella's departure for the ball" — from Act I, and "Waltz of love" — No. 49, "Slow waltz" in Act III.

A poetic, graceful gavotte becomes another solo characteristic of Cinderella, with a finely elaborated harmonic part. The dance, performed by sisters Magger and Bearcat, is accompanied by a violin (here — by two violins) as it should be in proper dance-class, — sounds clumsy and awkward, but "under Cinderella's feet" it finds poetics and charm of the old times, and is coloured by timbres of different instruments of the orchestra.

The leading theme of a Fairy Beggar, gaining a special sense in No. 38, 'The Midnight', is connected with the world of fantastic miracles. It marks a starting point of some vitally important events in life of the heroes, and when Fairy shows up, she is accompanied by magic passages of the harp.

In the image of Prince, the spunky lyrics of Romeo and a sharp Scherzo-type personality of Mercutio are incorporated. One amusing episode related to Prince slightly demonstrates true, slightly sarcastic Prokofiev's attitude to his character: Prince gives Cinderella three oranges as a present, and this reminiscence of another plot is accompanied by musical autoquotation — the March from the opera "Love to Three Oranges", thus giving a hint at typological link between the Prince in love with oranges, and our- hero.

The world of Stepmother and Cinderella's step-sisters is connected with a motor, toccata-like rhythm and whimsical, sharp melodies, and, in a wider sense, — with ironic review of daily-life and ballet dances. In music of the sisters' variations in No. 3, Pas-de-chale, and in the Ball scene — Nos. 23, 24 — Prokofiev creates a grotesque image of Cinderella's antipodes. The contrasting images underlying a tragic collision (including the music) in "Romeo and Juliet", do not interact in any way in "Cinderella".

When conceiving a fantastic ballet, S. Prokofiev intended to present this traditional story in a Russian way, as "a true Russian fairy tale" and considered a fairy tale about Masha the Blacky from A. N. Afanasyev's collection of fairy tales. During the work, however, the plan had been changed, and Prokofiev again got fascinated with classicism, and its musical features. He started working at the ballet in 1940, using the libretto written by N. Volkov, and completed his work only after the war. The premiere took place at the Bolshoi Theatre in Moscow on November 21, 1945, staged by M. Lavrovsky with Galina Ulanova as Cinderella. Later on, based on the music of the Prokofiev's ballet, a collection of Piano plays and three orchestra suites were created.

Ballet "On the Dnieper"
"On the Dnieper" is a ballet by Sergei Prokofiev, the composer who added many wonderful pages to the history of Ballet Theatre, whose music rich in resilient and elegant rhythm is theatrical in the highest sense of this term, the composer who gave to the world art such great works as "Romeo and Juliet", "Cinderella", "Tale of the Stone Flower".

These three pearls have been created during the second half of Prokofiev's life, little is known about the four previous ballets. New York Ballet troupe of George Balanchine showed "The Prodigal Son" in Russia where as "Le Chout", "Le Pas d'Acier" and "On the Dnieper" have never been staged in Russia. The ballet music could only be heard in the form of orchestra suites recorded on LPs. The scores of the ballets had never been published in Russia.

Prokofiev composed these works while abroad and in compliance with the signed contracts immediately upon completion of each work the scores became property of "Russian Music Publishing House" located in Paris. A wonderful conductor Sergei Aleksandrovich Koussevitsky has been the head of it for many years, his contribution to promotion of Russian music abroad as well his accomplishments as a conductor and a publisher are absolutely invaluable.

After Koussevitsky's death the publishing house became property of British company "Boosey and Hawkes" which has consequently become the one to retain all the rights to works recorded abroad. In the recent years only, due to a great development of the international cultural exchange, these materials became available. So, now we have the score and orchestral parts of the ballet "On the Dnieper", which have been first performed in September, 1982 and soon recorded on LP.

"At summer of 1930, — wrote Prokofiev in his "Autobiography", — I worked on a ballet in two scenes "Sur le Borysthene" (On the Dnieper)... The lyrical plot, which we have invented together with the choreographer, was not a goal but a reason for" trying to built up the proportional musical-choreographic construction... I wrote music lightly and with pleasure. By its style, it is close to the "Prodigal Son". The lyricism of my youth has been remarked ten years later; it's necessary to think forwards, there'll be some chance for the ballet "On the Dnieper".

The plot of the ballet is quite simple — it's a choreographic story about a Red Army man — Sergei who returns from war to his small village on the Dnieper. Unfortunately Sergei's feeling towards his fiancee Natasha died and he falls in love with a beautiful girl — Olga. Olga's parents however choose to have her married to a different man, Olga's engagement with the unloved takes place, a fight between Sergei's and the groom's friends breaks out. Sergei is defeated but in the finale self-sacrificing Natalia helps Sergei and Olga escape from the village.

This plain story has nevertheless inspired Prokofiev to create a wonderful score. Its value is contained not only in an unconditional anticipation of the atmosphere of "Semyon Kotko", lyrical revelations of "Romeo and Juliet" and "Cinderella" but also in the unique integrity of the composition despite numerical division of the ballet (like Prokofiev wrote — the "musical-choreographic construction", of masterly placed orchestral colors, of the peculiar intonational charm. (melody. su)