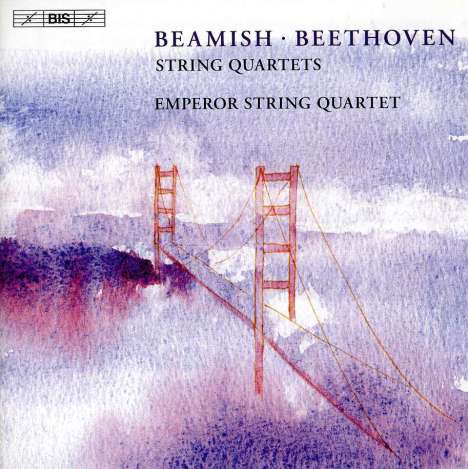 versandfertig innerhalb von 1-3 Tagen
(soweit verfügbar beim Lieferanten)
EUR 19,99*
Versandkosten
As a viola player and dedicated chamber musician, Sally Beamish has had ample opportunity to acquaint herself with the string quartet genre. The Beethoven C minor Quartet on this disc she first played when she was 14. Thirty years later, when commissioned by the Brodsky Quartet to write a work inspired by Beethoven's Op. 18, this is the one that caught her imagination. The result is String Quartet No. 2, composed immediately after a visit to California in 2000. Inspired by two bridges – Golden Gate in San Francisco and a Californian rock formation called Natural Bridges – Beamish uses themes and bridging passages from the first movement of Beethoven's quartet for her four-movement work. Themselves forming a bridge across 200 years, these two works are preceded by Beamish's First String Quartet. Written as a meditation on the freedom of thought, it contains references to music from various cultures, including Ukrainian folk singing, a Turkish lament and African chants. Reviewers of previous BIS releases of Beamish's music have commented on the composer's 'striking and personal voice' and her 'poetic imagination and sensitivity to the world' – qualities that are no less audible on the present disc. The combination of classical and contemporary on this disc suits the Emperor String Quartet very well – in the 1995 Evian International String Quartet Competition the ensemble won not only the overall prize, but also the Mozart and Contemporary Music categories. For BIS they have previously recorded two discs, both of them highly acclaimed. The quartet's performance on BIS-CD-1269, featuring works by James MacMillan, was described as 'ultra-sensitive, and displaying a spectacular virtuosity and polish, while being remorselessly explosive' in the French music magazine Répertoire, and the German Fono Forum named them 'a true elite ensemble' on the strength of their disc of Martinu string quartets.

"These are spacious, well focused recordings; and all three performances by the Emperor Quartet - they play the Beethoven Op 18 No 4, too - have abundant character and technical aplomb." The Gramophone 02 / 2006

Chapel Choir of Pembroke College Cambridge - All Things Are Quite Silent
CD
EUR 19,99*