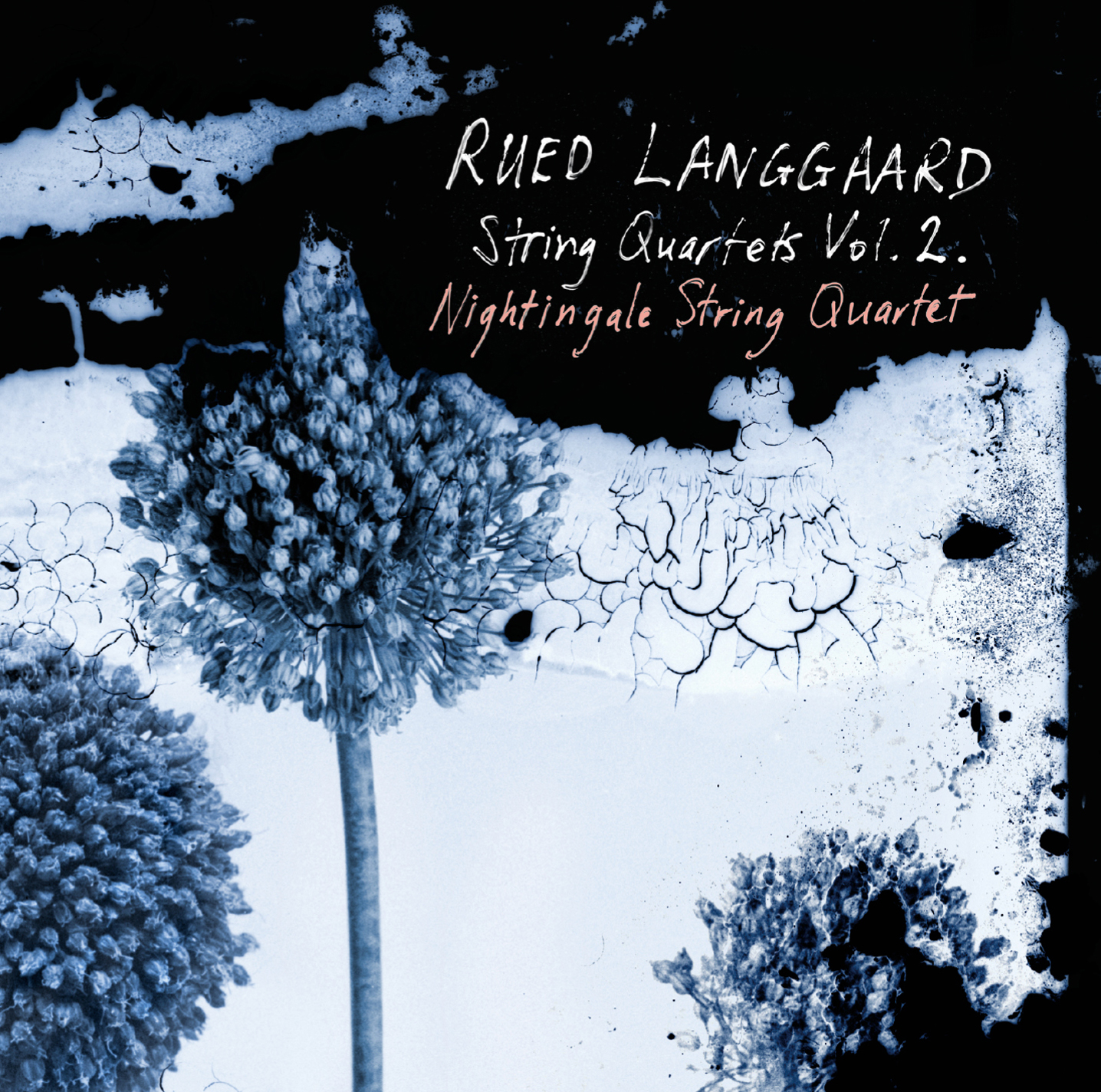 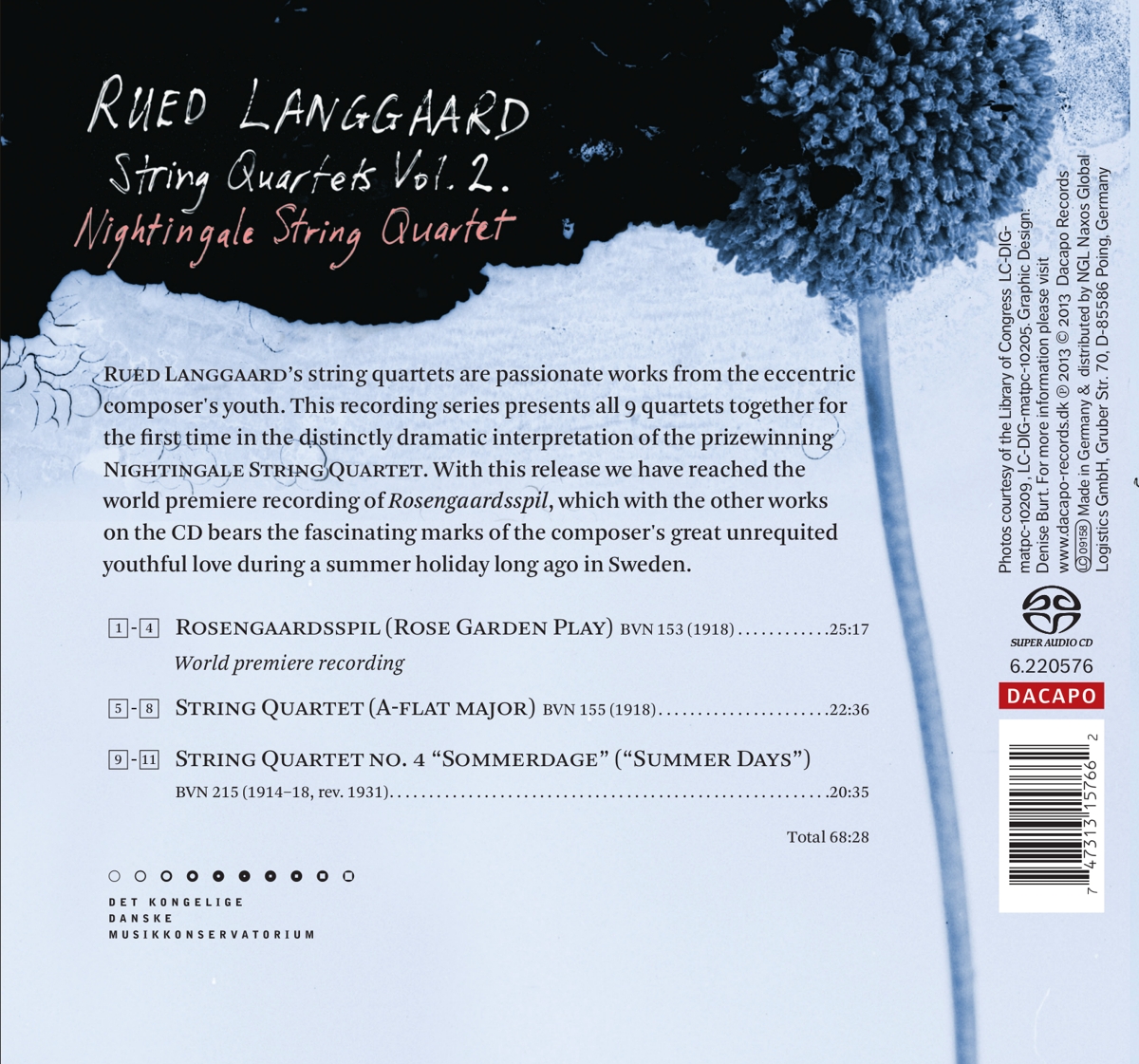 Rued Langgaard did not write his string quartet works for particular ensembles - with the exception of no. 3, which was composed for one of the best chamber ensembles in Denmark in the 1920s, the Breuning-Bache Quartet. String Quartet no. 3 is also the only one of the ten works that was published during the composer's lifetime, in 1931. The others have only been published after 1993, the last six as late as the present recording project and under the auspices of the Rued Langgaard Edition. Three of the works on the list were not performed in Langgaard's time, and all in all there were only ten concert performances of these works in his lifetime. Quartet no. 3 was performed four times, the last time by the Gerhard Rafn Quartet during the festival Nordic Music Days in Oslo in 1934. In addition, in the 1930s and 1940s there were sporadic radio performances of nos. 2, 3 and 5. After this, interest in Langgaard's string quartets ebbed out. In 1972 the first recording of one of the quartets, no. 3, was released featuring the Copenhagen String Quartet, and a -milestone was reached in 1984, when the Kontra Quartet recorded six of the works and made Langgaard's string quartets known in innumerable performances in Denmark and abroad.

The remarkable thing about Langgaard's music for string quartet is the wide stylistic spectrum covered by the works as a whole. They were written in the time of new -departures between Late Romanticism and Modernism, and it is in fact a typical feature of the period that in his musical idiom Langgaard veers off now in the ‘retro' direction, now in the avant-garde direction, but without abandoning the classical formal norms. In Langgaard's quartets we thus find Classicist, Romantic, Neoclassical, Expres-sionist and Modernist features - in short, the tonal idioms of the music span the whole scale from Mozart to Bartók. The Neoclassical tendency, which has no counterpart in Langgaard's symphonies, makes its impact in the movement Mozart (of Rosengaards-spil), and colours the string quartet in A flat major throughout; the latter is almost a pastiche of Vienna Classicism. At the other extreme we find String Quartet no. 3, which with its aggressively Expressionist tonal idiom represents the wildest avant-garde in Danish music in 1924. One characteristic feature of the quartets, unlike Langgaard's symphonic music, is that among the total of 29 movements we find both decided (and humorous) scherzo movements and some of the weightiest slow movements Langgaard wrote.

Several of the works have a quite special inspiration. In 1913 the 20-year-old Langgaard was on holiday in Sweden, in the small spa town of Kyrkhult in Blekinge, where he lodged (with his parents) in a property called "Rosengården" (the Rose Garden). His stay there was to assume a lifelong significance for Langgaard, first and foremost, we are led to believe, because he had fallen in love with a girl called Dora (her identity otherwise is unknown to this day). At Rosengården Langgaard wrote some love songs to texts by -Goethe, and five years later these songs and mood evocations from that summer formed the inspirational basis for a whole three string quartets. At first all three of these works were given the title Rosengaardsspil (Rosengaard Play), but later their titles were changed (one quartet, however, has been published in its original form under the title Rosengaardsspil, while the same piece in a reworked form is called String Quartet no. 4; the other two are String Quartet in A flat major and String Quartet no. 6). Quartet no. 1 is also related to Rosengården and at one point was called Rosen-gaards-spil. The scherzo movement is based on the Goethe song Gleich und gleich, which is about the little bird and the little bee! Motifs from this song recur in Rosengaardsspil (1st movement) and String Quartet no. 4 (1st and 2nd movements). Another leitmotif with references to Rosengården appears at the beginning of the final movement of String Quartet no. 1 and reappears in both Rosengaardsspil and String Quartet no. 4. Five of the quartets are thus part of a complex of works with the summer of 1913 as a shared source of inspiration. And clearly it is no coincidence that String Quartet no. 6 quotes the Swedish folk song "Och hör du unga Dora vill du gifta dig i år" (Oh tell me now, young Dora, would you married be this year?)

String Quartet no. 2
The work was written in January-February 1918 and was given its first perfor-mance in a concert arranged by Langgaard himself at the Royal Academy of Music in Copenhagen in 1919. The boldness and aggression of the musical idiom did not go down well with the music critics, but the work must have made an impression in the progressive music milieu, for the quartet was performed again in 1922 at the Young Composers' Society, which promoted interest in contemporary music. In 1931 Langgaard revised the work, but only to a modest extent, and in this form it was performed on the radio in 1938 by the Gerhard Rafn Quartet. The original title was Composition for Four String Instru-ments, signalling the work's straightforward, ‘modern' attitude. The first movement alternates between ‘fiery' passages (allegro focoso), and passages of a contemplative character. The ending is dominated by the dissonant tritonus interval E flat - A, which also concludes the work as a whole. The second movement is ‘futuristic machine music', with a train passing at full steam on screeching rails. This ‘realistic' depiction of a locomotive was composed five years before Honegger's famous orchestral work Pacific 231. The third movement was originally entitled Landscape with a Fiddler, like the title of a painting. The music pans over a landscape, and along the way we pass a fiddler who plays a fiero alla zingaresa solo, after which the landscape again comes into focus. The final movement has a composite character, but is welded together by a repeated, energetic alla marcia risoluto section. The title Vandring (The Walk) should perhaps be understood quite literally as a ‘walking tour' where the ‘march' is interrupted by varying views characterized for example by romantic and mysterious sounds.

String Quartet no. 3
In 1924 the Copenhagen-based Breuning-Bache Quartet planned a concert of music by young Danish composers, and in this connection approached Langgaard to ask if he had a suitable work ‘in storage'. The approach inspired him to supply a brand new quartet, which was composed and fair-copied within a single week and given its first perfor-mance the same month (September 1924). Once more the music critics were entirely uncomprehending, but among Langgaard's colleagues a certain interest could be detec-ted, and this led to the printing of the quartet in 1931. Richard Hove's review of the publication in Dansk Musik Tidsskrift was to be one of the most positive mentions ever accorded a work by Langgaard. Hove speaks of "the divine spark", of "eruptions of a magical temperament" and of the work's "great internal power". The work demon-strates the most wildly experimental musical language to be found in Danish music before Carl Nielsen's Sixth Symphony (1925). Like Nielsen (in the Sixth) Langgaard ironizes over modern music, but at the same time furnishes a solid defence of it. Lang-gaard's characterizations, for example rapinoso (rapacious), artifizioso (artful) and schernevole (scoffing), suggest his attitude to the dissonant and aggressive in the idiom. The contrast to this is the chorale that begins the last movement, and which attempts to make itself felt in the middle of the movement amidst the maelstrom of modern music - and in the end carries off the victory. The melody was written for B. S. Ingemann's hymn "Den store mester kommer" (The Great Master Comes), and a few years ago it was added as a four-part piece to the official chorale book of the Danish national church.

String Quartet no. 6
This one-movement quartet was composed in three days around New Year 1918 / 19 and given its first performance less than two months later in a concert arranged by Lang-gaard himself at the Royal Academy of Music in Copenhagen. In the programme the work is called Rosengaardsspil (over en svensk Folkevise) "Rosengaard Play (on a Swedish folk song)", and the composition is clearly inspired by the summer stay at Rosengården in Sweden in 1913. It has the sound of a piece of programme music, depicting in a free form episodes and moods experienced by the composer. Idyllic and melancholy passages alternate with scherzo-like elements in the first part of the movement, in which two recitative-like solo sections, first in the viola and later in the violin, quote a Swedish folk song of unrequited love, "Allt under himmelens fäste" (Beneath the vault of heaven). An expressive passage leads into a festive waltz in Swedish folk-fiddler style (burlesco rustico), and this is followed by the concluding part of the work, which is based on the Swedish folk song "Och hör du unga Dora vill du gifta dig i år" (Oh tell me now, young Dora, will you married be this year?), this too a song of unrequited love. After the first performance the work was laid aside by Langgaard, but he looked it out again in the 1940s and furnished it with the title String Quartet No. 6 in One Movement (the numbers 1-5 were already taken). The second performance took place on Danish radio in 1980.

Variations on "Mig hjertelig nu længes"
The composition bears the subtitle Chamber music for 2 violins, 1 viola and 1 cello. The melody, best known in English as "O sacred Head! Now wounded" was composed by Hans Leo Hassler (1564-1612), but is used in a later traditional chorale form. The quartet was composed in July 1914, but only fair-copied in the summer of 1915. It was put on the shelf, but resuscitated by Langgaard in 1940. The original intro-duction, which had evidently been lost, was now replaced by a new introduction in the form of a reworking of an organ prelude to "Mig hjertelig nu længes" which Langgaard had written for a funeral in 1931. The hymn tune is only heard in its entirety in Variation I (in the cello part), but the ending reappears in Variation VII (in the first violin part). The variations are one of the composer's most purely classicist works, with reminis-cen-ces of Beethoven's late quartets. The composition was given its first performance in 1967.