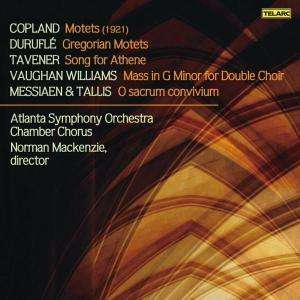 Now available in multi-channel SACD as well as CD! For the first time in Telarc's long and fruitful association with the Atlanta Symphony Orchestra (ASO), it will release a recording by the Atlanta Symphony Orchestra Chamber Chorus without the orchestra. The ASO Chamber Chorus is composed of forty to sixty members selected by audition from the ranks of the renowned, all-volunteer, 200-member Atlanta Symphony Orchestra Chorus, which has earned nine Grammy Awards for Best Choral Performance, most recently in 2005 for the Berlioz Requiem. This a cappella album of works by Messiaen, Tallis, Vaughan Williams, Tavener, Duruflé, and Copland is conducted by Director of Choruses Norman Mackenzie and was recorded last June at the Episcopal Cathedral of St. Philip in Atlanta, whose large scale and fine acoustics make it ideal for a choral recording.

Robert Shaw founded the Atlanta Symphony Orchestra Chamber Chorus almost 40 years ago in 1967, followed by the larger ASO Chorus in 1970. After the legendary conductor's death in 1999, Norman Mackenzie, who worked closely with Mr. Shaw for 14 years, was selected to carry forward his creative vision to a new generation of music lovers. In addition to their regular schedule of concerts with the orchestra, under Mr. Mackenzie's leadership, the choruses—which have been widely acclaimed for the beauty, precision and expressive qualities of their singing—continue to flourish in a wide variety of repertoire and performance opportunities.

In 2003, when the full Atlanta Symphony Orchestra Chorus sang Britten's War Requiem in its Berlin Philharmonic debut conducted by ASO Principal Guest Conductor Donald Runnicles, it was cheered not only by the sophisticated Berlin audiences, but by the Berlin Philharmonic musicians as well. In March 2006, ASO Music Director Robert Spano will conduct the Atlanta Symphony Orchestra and Chorus in the Verdi Requiem at Carnegie Hall, where he conducted them several years ago in a performance of Vaughan Williams's Sea Symphony, the Telarc recording that won the chorus a Grammy in 2003.

Prior to recording this program in Atlanta, the ASO Chamber Chorus performed it in concert at a convention of the American GuiId of Organists in Columbus, Georgia. This past October the chamber chorus joined Donald Runnicles and the Orchestra of St. Luke's at Carnegie Hall in a performance of Mozart's Requiem and Ave Verum Corpus and was praised by The New York Times as »beautifully trained and absolutely focused…singing with a purity unmuddied by vibrato and individual excess.« Then in June 2006, Norman Mackenzie will conduct the ASO Chamber Chorus in a program similar to that recorded for this disc at the Ojai Festival, where Robert Spano has been selected as Music Director of the Festival's 60th anniversary season.

Chorus members believe the growth and autonomy of the Atlanta Symphony Orchestra Chorus and Chamber Chorus are inevitable, an evolution that is solidly supported by the Atlanta Symphony Orchestra. In fact, included in the plans for the ASO's $300 million Symphony Center is a movable ceiling, which would rise to about 100 feet above the stage, ideal for solo choral repertoire. (concordmusicgroup. com)