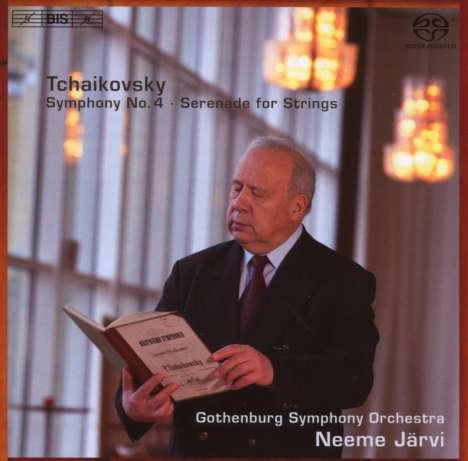 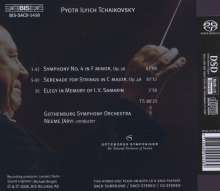 lieferbar innerhalb einer Woche
(soweit verfügbar beim Lieferanten)
EUR 19,99*
Verlängerter Rückgabezeitraum bis 31. Januar 2023
Alle zur Rückgabe berechtigten Produkte, die zwischen dem 1. bis 31. Dezember 2022 gekauft wurden, können bis zum 31. Januar 2023 zurückgegeben werden.
Versandkosten
In the cycle of Tchaikovsky’s symphonies with Gothenburg Symphony Orchestra conducted by Neeme Järvi, we have reached the fifth instalment. As described by reviewers, previous releases include ‘a superb Symphony No. 1, cleansed from any residues of syrupy romanticism’ (Classics Today France. com), ‘an outstanding performance of the Little Russian Symphony [Symphony No. 2], beautifully played and paced and immaculately recorded’ (Gramophone), an interpretation of the Fifth striking in its ‘dramatic and architectural cohesion’ (Le Monde de la Musique), and a Sixth which ‘packs a powerful punch’ with ‘a dazzling performance of the march and some gut-wrenching climaxes in the final adagio’ (The Guardian, UK).

The time has now come to Symphony No. 4, which – along with No. 5 – Tchaikovsky himself often referred to in the context of ‘Fate’, symbolized by a ‘fate motif’ which opens the work and which the composer described as follows: ‘This is fate, destiny, that portentous power that will not permit our quest for happiness to be successful, that jealously stands guard so that our joyfulness and peace are neither perfect nor cloudless, that hangs like the sword of Damocles above our heads and constantly, continually poisons our soul.’ In his description of the end of the work, Tchaikovsky sounds a note of resignation: ‘Look within yourself; do not say that everything in this world is sad. There are simple but strong joys. Rejoice in others’ rejoicing. To live is still possible.’ This last statement seems to be borne out in full by his Serenade for Strings in C major, composed three years later, a carefree expression of happiness that is never seriously disturbed by minor-key sonorities. The programme finishes off with an Elegy, also for strings.