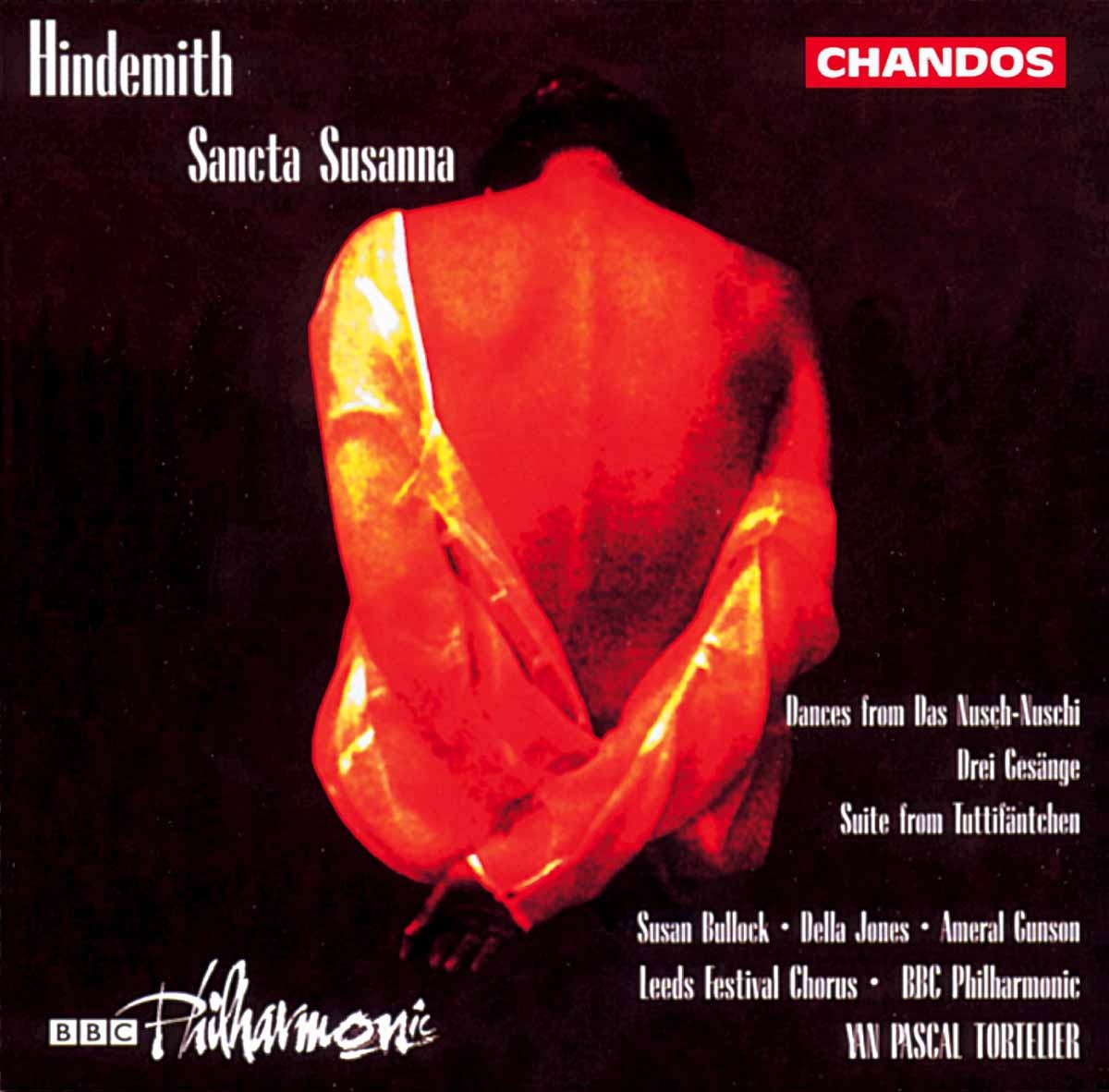 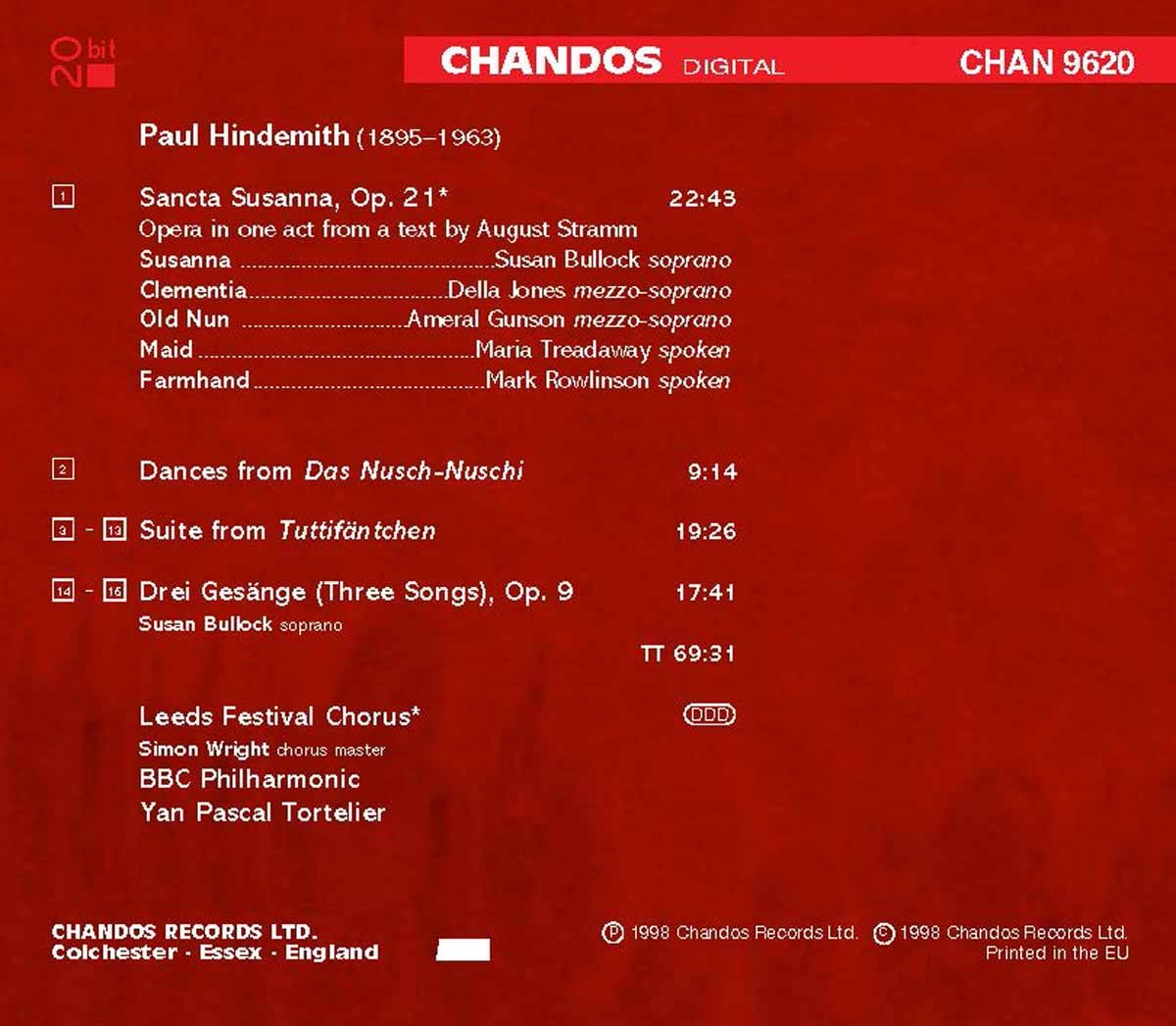 Tortelier’s acclaimed Hindemith series continues with one of the composer’s most shocking works, Sancta Susanna, as well as some rarely heard orchestral music.

Hindemith was drawn to the subject of Sancta Susanna by a text of Albert Bernhard Stramm which first published in the magazine Der Sturm. He set it for three female soloists, two speakers, a women’s chorus , and a large orchestra, including organ and celesta. The story is about Sister Susanna, who, inflamed by forces beyond her control, including the sight of a lovers’ tryst and another nun’s tale of sexual arousal, removes her clothes and clutches at the crucified Christ on a altar. The music is highly sympatheitc to her psychological state of mind and the drama is presented in a tightly wrought dramatic structure. A compelling, if rather shocking, experience.

The Drei Gesänge for soprano and large orchestra resulted from Hindemith’s discovery in 1917 of contemporary Expressionist poetry and drama, particularly through various literary journals, which transformed him into Germany’s leading young composer. These three songs represent Hindemith’s first raw reaction to an overwhelming creative urge he felt on dsicovering new artistic trends, though from a modern point of view, they are more akin to late Wagnerian romanticism than the Hindemith which was soon to come.

The Dances from Das Nusch-Nuschi were extracted from the opera of that name and first performed in November 1921. They are full of character and energy, and they are perhaps best summed up by Hindemith himself when speaking of the final march: "It has no other point than this: to fit into the stylistic framework of this scene and to give all the experts the opportunity to howl about the montrous bad taste of its creator. Hallelujah!"

The Suite from Tuttifäntchen was arranged from music of the opera which was first performed in 1922. The story tells of Tuttifant, a carver of puppets who creates a son for himself out of wood. The son is bought to life by a rather malign spirit. The music in may ways anticipates Hindemith’s younger contemporary, Kurt Weill.

"...Soprano Susan Bullock makes a heroic showing in the opulent Three Songs and she is no less convincing in Sancta Susanna (in which she receives admirable support from Della Jones and Ameral Gundon). Tortelier conducts with sympathy throughout, and Chandos’s presentation is exemplary..." Andrew Achenbach - Hi-Fi News - October 1998

"... Tortelier’s conducting is white-hot throughout, a roller-coaster ride from queasy late-romantic torpidity to expressionistic fury in a single unremitting span, while Bullock - her dark, voluptuous tone superbly captured by the Chandos engineers - is on tremendous form, scrupulous as ever in her musicianship, yet wringing every shred of hysteria from the text... The BBC Philharmonic plays with searing intensity, while the recording itseld is engineered with astonishing opulence... high recommended." Tim Ashley - Opera - August 1998