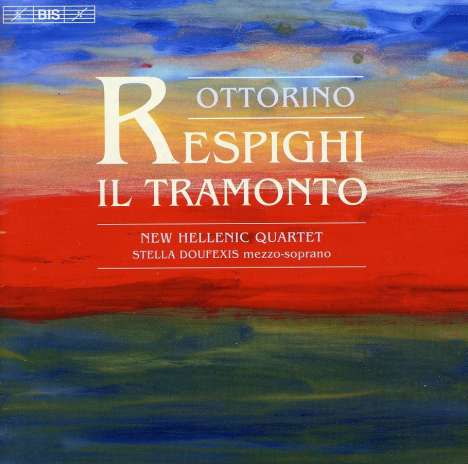 To judge by concert programmes from around the world, Respighi is something of a classical »one-hit wonder«. The Pines (and the Fountains) of Rome is played time and again, but most other works are rarely heard. If they had been performed more often, our opinion of Respighi as a composer would probably be quite different. The string quartets are a case in point: expertly put together by a composer who himself was a string player, they are far removed from his flamboyant, often grandiloquent symphonic writing. Here, instead, the cool, subtly and tastefully enunciated discourse of the four instruments reminds us that »deafening thought can also be found in a whisper«, to quote the liner notes by Philippos Tsalahouris. The two string quartets on this disc are separated by some 15 years, the Quartet in D minor being an early work composed during Respighi's stay in Germany as a student. The Quartetto dorico, on the other hand, is a work of the mature composer, written more or less at the same time as the Pines of Rome. At the same time, it is a new departure in Respighi's music, as a result of his discovery of the compositional possibilities offered by the old Gregorian modes. This disc also marks the first recording on BIS of mezzo-soprano Stella Doufexis, who joins the New Hellenic Quartet in the »lyrical poem« Il Tramonto (The Sunset) for mezzo-soprano and string quartet, a setting of the Italian version of a poem by Shelley. The New Hellenic Quartet will be known for their dedicated advocacy of the music of their countryman Nikos Skalkottas. This has resulted in two discs on BIS, about which the critic in American Record Guide wrote of »the New Hellenic Quartet's passionate and brilliant performances« and their »downright heroic« playing.