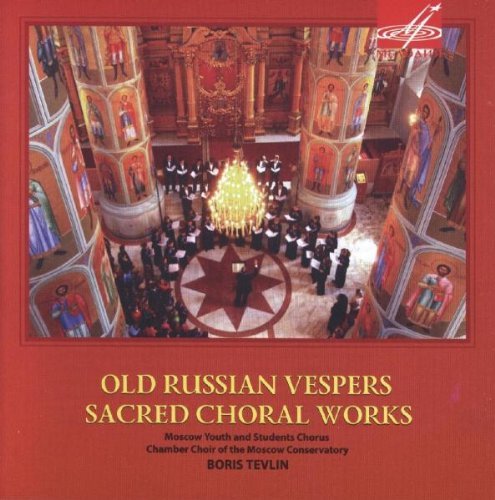 The composition on the disk named “Old Russian Vespers” was created by the outstanding mediaevalist Tatiana Vladishevskaya as some kind of present to celebrate the 1000th anniversary of Baptizing of Russia by Saint Vladimir. The performance of it by one of the leading choirs of the Soviet epoch – Moscow Youth and Students Chorus under direction of Boris Tevlin – served the prime purpose of enlightening, to say nothing of artistic explorations. The objective was to attract the attention of general public to the religious music of Old Russia. Within long decades listeners were separated from the mighty source of the native spiritual culture.

It is worth noting that you get acquainted not at all with a cycle work; in the epoch that preceded the appearance of Russian baroque, the native chorus literature could not present complete Vespers or Liturgy. This compilation includes songs from the most ancient manuscripts that could be deciphered. Mainly, except two fragments, Divine Service texts belong to the times after Patriarch Nikon, i. e. they correspond to the present day Orthodox practice.

The znamenny chant presented on the disk, two of its variations and travel chant can be referred to the group of the most ancient ones. Znamenny (that means it was recorded in “znamena” – Russian neumas) chant was the main one in Russian Orthodox practice and was called “pillar” (“stolp”) because it was some kind of a “pillar” that the religious music rested upon. Chants of that style were the sound expression of prayerful state of “praise” of God. The Great znamenny chant as well as travel one is connected with the emotional state of rejoicing to more extent; hence there is the breadth of melody, ecstatic elation of sounding.

The word is subordinate to music there that is why singers often introduced into the text outside text insertions that represented perverted Greek words to broaden the melody phrasing. One of such insertions called “anenaika” can be heard in No. 1. The adaptation of a pillar chant to divine service of the epoch of “poverty of godliness” that preceded Nikon’s reform is a Small znamenny chant, the essence of which is clearly expressed in its name.

The Greek chant appeared in Moscow in the middle of the 17th century as the synthesis of the late Byzantine melody and Russian tune thinking; at the same time a Kiev chant was brought to Russia by Ukrainian singers. The relief melodics close to folklore of that time makes related both styles; simplicity and availability are the cause of popularity of these chants in new and newest times. Alongside with choir music there represented so called poglasitsy – melody formulas for divine service. Poglasitsy are orally passed on and have been deciphered from the material of folklore expeditions.

The talented musicians whose creative life was successful afterwards took part in recording of “Old Russian Vespers” as soloists. Lev Kontorovich – the choirmaster at that time –is Honoured Worker of Arts of Russia, Professor of the Moscow Conservatory. Mikhail Nikiforov and Alexander Yudenkov are the famous opera singer who performed in many theatres of Russia and Europe.

The main trends and styles of Russian spiritual music of the last 250 years are presented in the second part of the album. The combination of works that really became the classics of religious art of Russia and little known works of the venerable composers who got to be famous as secular composers generates interest. Boris Tevlin and his famous Chamber Choir of the Moscow Conservatory have this programme recorded.

Boris Tevlin was born in July 12, 1931 in Saratov. He belongs to the pleiad of world known choir conductors. He graduated from the Moscow Conservatory with an honour degree in two specialties: as a chorus conductor (prof. Vassily Mukhin's class) and organist (prof. Alexander Gedike's class); post-graduated in 1962 (prof. Alexander Sveshnikov's class). During 40 years (1963–1993) Boris Tevlin’s professional activity was connected with Moscow Youth and Students Chorus. The company won the international recognition under his leadership and the numerous victories of the choir at the international contests are the vivid proof: “Grand Prix” and gold medal at The International Chorus Competition in Kork (Ireland, 1981), gold medals at international chorus competitions in Tallinn (Estonia, 1972), Varna (Bulgaria, 1975), Tolos (Spain, 1989), as well as silver medals at the Competition in Arezzo (Italy, 1970), and many awards of domestic contests and festivals.

From 1979 to 1991 Boris Tevlin headed the Student’s Choir of the Moscow Conservatory. These were the years when the active touring activity of the company both in the country and abroad began (Germany, Hungary, Poland, and France); a great number of recordings were made.

Boris Tevlin has been teaching in the Moscow Conservatory since 1959, in 1981 he became Professor. He was a head of the Choir conducting department from 1993 till 2007. Boris Tevlin has been a founder and conductor of two unique ensembles – the Mixed Chorus of Russian Conductors-Choirmasters (1987), and Russian-American Chorus (1994) which performed with a real success at the Grand Hall of the Moscow Conservatory.

Since 1995 he is a founder and permanent art director of Chamber Choir of the Moscow Conservatory. Under his direction The Chamber Choir was awarded the Grand Prix and two gold medals at the International Chorus Competition at Riva del Garda, as well as the first prize and gold medal at the First Brahms International Chorus Competition in Vernigerod (Germany, 1999). In July 2000 the Chorus become a winner of the First World's Choral Olympiad in Linz, Austria.

In 2008 Rodion Shchedrin's choral opera Boyarina Morozova will be awarded the “ECHO Klassik 2008”, for the category "Best Opera Recording – 20th / 21st Century". The award-winning CD has been released by the Schott label WERGO, performed by conductor Boris Tevlin and the Chamber Choir of the Moscow Conservatory.