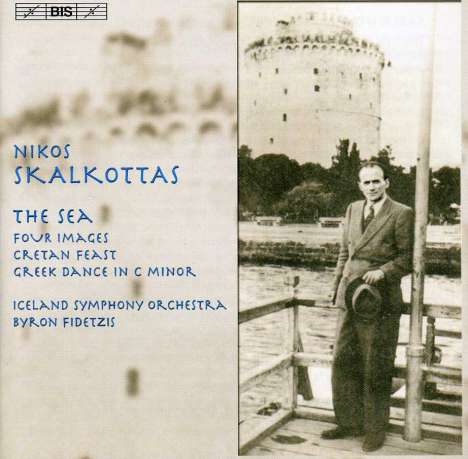 versandfertig innerhalb von 1-3 Tagen
(soweit verfügbar beim Lieferanten)
EUR 19,99*
Versandkosten
In accounts of Skalkottas's life, the point is often made that the young man who was so highly thought of by his teacher Schoenberg in cosmopolitan Berlin, by returning to Greece in 1933 closed the door on a brilliant international career as a composer. In his introduction to the present disc, Byron Fidetzis (appearing on BIS for the first time) makes a case for the reasons Skalkottas (1904-49) may have had for remaining in Greece in spite of his difficult situation, emphasizing the composer's need to stay in touch and in dialogue with his cultural heritage. This same wish may also have been the motivation for Skalkottas’s “re-discovery” of tonality, leading him to compose at least a large part of his later orchestral works in a more traditional idiom. Thus, in Fidetzis’s words, Skalkottas’s “development ran in a direction quite contrary to that of other important Greek composers of his generation.” The works on the present disc are all examples of this – they are all tonal, and all with strong Greek associations. The Sea in his ballet suite is really the Aegean, with its fishermen and dolphins, and the rural scenes in the Four Images could have taken place in any Greek village. This, our seventh disc of Skalkottas’s orchestral music, also includes a curiosity: the composer's very first orchestral score, an orchestration of Fête crétoise by the great Greek conductor Dmitris Mitropoulos.

"All of the music here is extremely well played and conducted. It's obvious that Byron Fidetzis finds the idiom comfortable, and the Iceland Symphony sounds terrific thanks to typically resplendent BIS engineering. This one's a no-brainer: buy it." ClassicsToday. com 2006

" The Iceland Symphony Orchestra, which by now has plenty if Skalkottas under its belt, plays with entirely idiomatic enthusiasm, in lively, colourful performances in top-notch sound." International Record Review 04 / 2006