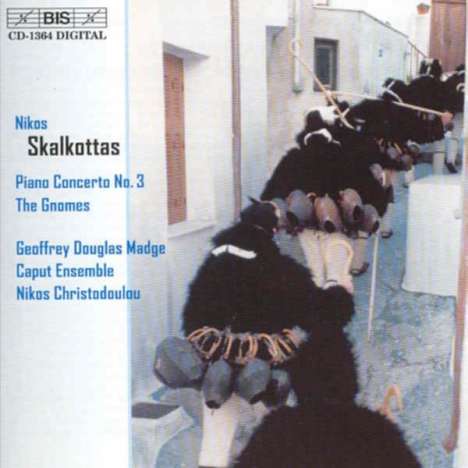 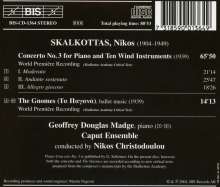 versandfertig innerhalb von 1-3 Tagen
(soweit verfügbar beim Lieferanten)
EUR 19,99*
Versandkosten
Geoffrey Douglas Madge and Nikos Christodoulou have already collaborated on a previous Skalkottas recording for BIS. Now the turn has come to Concerto No. 3 for Piano and Ten Wind Instruments, written in 1939 and one of Skalkottas’s most individual creations.

It is said that the composer was particularly fond of this work; however, as with most of his works, he never heard it performed. The concerto was premièred in London in 1969 but, because of the extraordinary demands of the solo part, three different pianists shared its movements. In 1985 Geoffrey Douglas Madge became the first to play the entire concerto.

On this world première recording Madge is supported by members of the Caput Ensemble, the seasoned Icelandic chamber group, and by conductor and Skalkottas’ expert Nikos Christodoulou, who has made a critical revision of the monumental – 65 minutes long – score. (Christodoulou’s indefatigable work for the sake of his compatriot was crowned last year when his recording with the BBC Symphony Orchestra of the 36 Greek Dances was given highest marks in several of the world’s leading music magazines.)

Complementing the concerto and showing us another, completely different, face of this intriguing composer is the ballet suite The Gnomes. Composed in the same year as Concerto No. 3, the music was long considered lost until its recent discovery. Proof of its maker’s gift for pastiche, its 14 brief movements are Skalkottas’s arrangements of pieces from Bartók’s well-loved For Children, Greek folk-songs and original compositions, all brought to life by eleven of the musicians –flute, oboe, trumpet, strings and percussion – of the Caput Ensemble under Nikos Christodoulou.