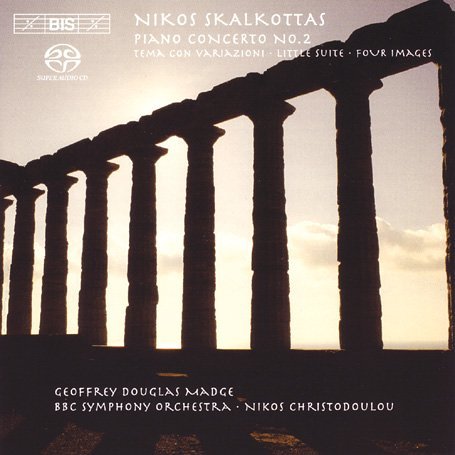 In BIS's pioneering series of Skalkottas's orchestral music we are now releasing the sixth instalment. The main work on the present disc is the Second Piano Concerto (1937), a composition which was essential for the composer's early posthumous reputation. In the 1950s it was championed by the legendary critic Hans Keller, who wrote: »Passionately dramatic and lyrical, heroic and tenderly submissive in turns, the Concerto is an immediately fascinating work…There is a new and incisive thought, a novel developmental idea, an unsuspected textural perspective at every corner«. Keller went on to describe its composer as follows: »the first real and great twelve-note composer since Schönberg … the anti-romantic era left him cold, or rather hot: his music is as romantic as all full-blooded music, and as classical as all great art.«

On the disc is also Tema con variazioni, the very last composition Skalkottas worked on. (Its orchestration was interrupted by the composer's death in 1949, and has been completed for this recording by conductor and Skalkottas expert Nikos Christodoulou.) The work is actually the fifth movement of the monumental, but unfinished, Suite for Orchestra No. 2, of which the first movement, Ouvertüre Concertante, is available, and the fourth, Largo Sinfonico. These two works are followed by the Little Suite for Strings from 1942 – a work of almost extreme brevity – and the late, tonal, suite Four Images (1948). The latter work was intended for a ballet, and depicts rural life in a Greek village.

The interpreters on the present disc have all appeared on previous discs in the series: Geoffrey Douglas Madge has been the soloist on the three piano concertos so far released, and Nikos Christodoulou and the BBC Symphony Orchestra collaborated on the highly acclaimed recording of 36 Greek Dances.