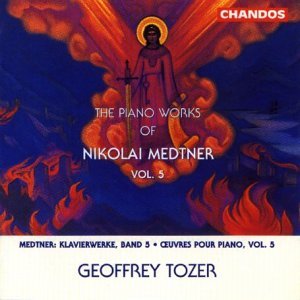 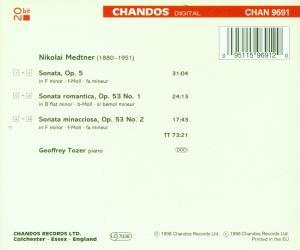 Geoffrey Tozer gives an outstanding performance of three of Medtner’s hugely contrasting sonatas in this the fifth volume of his complete piano music. Medtner was a master craftsman in music. His mastery of musical grammar is evident even in his earliest works. His first sonata, Op. 5, can be taken apart, and the same musical craftsmanship would be as evident as in any one of the later sonatas. His music may at first sound celebral, or appear as unfamiliar, unfriendly architecture, but familiarity reveals its lyrical and emotional qualities. The Sonata in F minor, Op. 5, a four-movement work, was composed between 1896 and 1903. It was begun when the composer was only sixteen, but is a contender for the title of Medtner’s finest sonata. It has complete mastery over thought and design, and the composer’s warm and deep feelings are clearly and candidly expressed. What makes it special is the relative leanness of the writing, giving a quality similar to that of the great ’Nightwind’ sonata. The Sonata romantica and the Sonata minacciosa were both published in 1932 as Op. 53 and offer opposing views of life. The Sonata romantica in B flat minor is mainly lyrical.
Its four movements each have a title, are played through without a break, and sound like a continuous romantic story. The placid mood of the opening Romanza is changed by the frenetic Scherzo, one of Medtner’s non-stop endurance tests. With the start of the Meditazione, Medtner begins to knit the threads of his story. The energetic finale is Medtner’s best example of a ’summing-up’ where all the themes are minutely examined. The Sonata minacciosa - ’threatening sonata’ or ’menacing sonata’ - is a particularly difficult work to play. It is in one lengthy movement and menace lurks behind every phrase. In form it is quite regular, but very chromatic and tonally uneasily centred, beginning around F minor, so that on first hearing the overall shape may not be easy to discern. The ’summing-up’ towards the end - such a feature of Medtner’s writing, is in the form of a cadenza.

"... Giving the lie to its neglect, this powerfully "menacing" work is one of Medtner’s more striking sonatas and Tozer rises to it with relish. All in all, this is one of his best in the Medtner series and enthusiasts of this composer’s brand of recherche traditionalism may open their wallets with confidence..." - Ian MacDonald - Classic CD - November 1998