Music for the Coronation of King George II (1727) 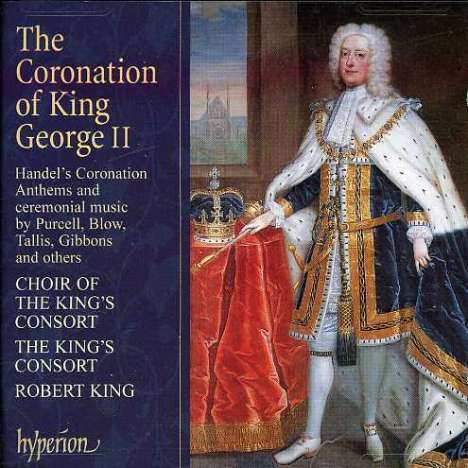 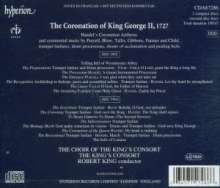 Crowning The King's Consort's celebrations of its twenty-first birthday and its millionth CD sale for Hyperion, comes a truly spectacular reconstruction, that of the Coronation of King George II in Westminster Abbey in 1727. Complete with ringing trumpet fanfares sounding from all corners of the venue, dramatic drum processions up and down the aisles, shouts of acclamation from a huge cast, pealing church bells (especially recorded at historic churches and cathedrals across England and Wales), and some of the greatest of all ceremonial music, this two-for-the-price-of-one disc is a spectacular musical and sonic tour-de-force.

The music is fronted by Handel's four great Coronation Anthems, including Zadok the Priest (so striking at its first 1727 hearing that it has been performed at every Coronation ever since), alongside splendid coronation music by Henry Purcell, John Blow, William Child, John Farmer, Thomas Tallis and Orlando Gibbons.

'A reconstruction, complete with a plethora of fanfares, drum processions, schoolboys shouting 'Vivat Rex!', and a great deal of bell clanging … all of it impressive music, well played and sung, and vivdly recorded' (The Sunday Times)

'Robert King’s magical history tour of Hanoverian London brings life to contemporary accounts of the coronation of George II. Outstanding accounts of Handel’s Coronation Anthems and a joyful reading of Purcell’s I was glad … a powerful experience' (Classic FM Magazine)

'The whole experience of listening repeatedly to this restaged coronation has been deeply satisfying and indeed moving. It is not like hearing a recording. You were there – it is as simple, and as wonderful, as that' (Fanfare, USA)