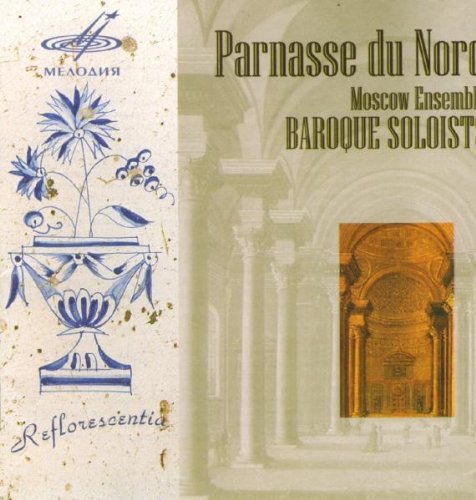 “Northern Parnassus” is the conception, the “Baroque soloists” made a base of their attitude towards life. The members of this Moscow ensemble devoted themselves to the performance, studying and looking for the music pieces, written in XVIII – XIX centuries in Russia or in the countries, which were closely related to it.

The essence of this conception can be summarized as following. In XVIII a unique cultural situation emerged in Russia. The best European artists, architects, directors, ballet-makers and musicians were coming to work in Russia. Pragmatic motives not always played here the most important role. Any close examination of the Russian culture of the XVIII century can only confirm this view. Many of cultural ideologists, scientists, philosophers, who visited Russia those times, recognize such a specificity as the Russian State. They experienced a deep influence of Russian folk art, some of them even converted into Orthodoxy. Of course Russia was influenced by European culture. But we cannot help indicating to the opposite process, which had obtained a total and stunning character by the end of the century.

Napoleon Bonapart seemed to recognize it too, as he used to justify his invasion into Russia by the catastrophic impact of it on the European consciousness, which must be stopped. Let’s turn to examples. The notes by Mikhail Lomonosov, the key figure of early Russian Enlightenment, which are being kept now in the National library in Prague, were written for Voltaire and later became very significant for the Enlightenment Conception in Europe. A Russian historian of culture Yuri Lotman wrote about it not once. Working on his oratorio “Creation of the World”, Haydn used Alexander Radischev’s poem with the same name (translated into German), which for a time became the composer’s handbook, and the text of the poem being almost an accomplished libretto.

The things we know as Viennese music culture, connected with the names of Haydn, Mozart, Pleyel, Ivan Jarnovitch (known as Giornovici), and Beethoven, in fact are melodies of Slavic, as well as of Russian and Ukrainian peoples.

Melodic fund of these peoples represents itself the ground of classical compositions of the period. The composers are carried away with the idea of combining the European counterpoint tradition with folk-like shaped heterophony, widely used, for example, in Russian folk songs.

It is widely known, that Viennese classics perfectly knew the collection of folk songs, edited by Trutovsky. Mozart was making clavier improvisations on the motives of Russian folk melodies in the presence of Russian Great Prince Pavel Petrovich, who was then traveling around Europe under the name of “The Northern Prince”.

Beethoven showed a good knowledge of Russian vocal heterophony in his “Russian quartets”. However, the Trio of the second movement of his prominent Ninth Symphony with its apotheosis “Ode to Joy” is the best example, as the main motive of this section is a variation of Russian song “Kamarinskaya”, which was a kind of music “mystic protection” against evil spirit in Russian folk music tradition.

The problem of interrelations between Slavic motives and European professional music works was first articulated by Russian romanticist, musical critic and talented writer Vassili Odoevsky. He urged historians to prove the Slavic origination of J. S. Bach’ melodic lines, - for Odoevsky himself it was already an axiom, as well as Slavic genetics of the same of Haydn’s and Pleyel’s.

It is also known that Antonio Vivaldi in the end of his life wanted to move to Russia, but his health prevented him from realizing his dream, so he could reach only Vienna, where he died. But he wanted his pupils – Madonice, Daloglio, Verocchai, Antonolini - to come to Russia, and they fulfilled the will of their teacher.
The count A. K. Razumovsky invited Mozart to Russia in October of 1791, and only death of the composer interrupted these plans.

Composers, who came to Russia, initiated here a new music culture, which has no analogies, as the national music principles (French, German, Italian, Czech etc.) were “smelted” into a new quality. The philosophical conception of the epoch as well as its main task became clear. The Prince Grigory Potemkin and Catherine the Great began to realize so-called “The Greek Project” – an attempt to construct an Orthodox empire to oppose the Western revolutionary masons’ influence of Europe.
This cultural atmosphere of the late XVIII-early XIX centuries we have called “The Northern Parnassus”.

It is partly presented in the CD. The musicians did not try to follow any chronological or geographical principle. The general impression, in our opinion, is made by the intonation unity of the composition.

The program, recorded on the CD, starts with Sonata in C major by Dmitri Bortniansky. It is a transcription of a Pianoforte Sonata, dedicated to Her Empress Highness, Princess Maria Feodorovna, made by Andrei Spiridonov. According to the performance traditions of the late XVIII century musicians played on the instruments they had at hand, which let them solve the problem of the right hand in keyboard instrument as numbered bass, played by cello and baroque guitar. The creation of this and other compositions by Bortniansky in the 80-s of XVIII century for “little court” resembles the situation with “Decameron” by Bocaccio, in which the characters, locked in the castle, devote their time to the creation work. Besides, many people, living then in Gatchina, including the Great Prince Pavel Petrovich, his wife Maria Fedorovna, count Chernyshev, librarian of Pavel I Lafermier, were taking part in the operas by Bortniansky.

In the famous J. S. Bach’s Aria from the Cantata No. 147 the musicians wanted to accentuate the imaginable Slavic origin of the melody of the Aria; they were following the advice of Odoevsky, the author of a story “Sebastian Bach”. It should be noticed also that in Europe the music by Bach was forgotten for the whole century, while in Russia it was always performed.

Trio-Sonata by J. S. Bach in G major (actually written by his son, Carl Philipp Emmanuel and listed for a long time in the J.-S. Bach’s catalogue) was one of the most popular in Russia; it was often included in the programs of music evenings, organized by Count Sheremetiev, who was a good cello-player himself. The performance of Bach’s compositions by Russian performers had some peculiarities. It was connected with the fact that many Russian instrumental players started their professional training at the age of 13-14, after they lost their voice and had to leave the church boys’ choir. So, their initial music education was based upon so-called “znamenny (plain)” chant and “hoock-note” (a sort of neumatic notation of Byzanthian origin) system, which left its stamp on the music perception of the young musicians. Here we can even speak about Russian authentic performance manner of XVIII century. The way, this trio is performed in the CD, is very close, in our opinion, to these traditions.

The Trio by Mysleviček is included into the program, because this Czech composer was closely related with Russian music culture. We also know about his friendship with Mozart and Maxim Sozontovich Berezovsky during the years of studying with Padre Martini in the Music Academy in Bologna. The score of the opera “Nitetti” by Myslevichek was found after the death of the composer in the house of Berezovsky in St.-Petersburg.

Three French romances by Ferdinando Antonolini belong to the genre of French “troubadour” songs. This composer, who had lived in Russia for many years, is interesting to us first of all for his opera-vaudeville “Lomonosov or Recruit the Versifier” and of oratorio “The Last Judgment”. The Anthem on the text of Gavriil Derzhavin (famous poet, who wrote many Russian classical odes) with the music by Antonolini has become a permanent part of the “victorial” Paul’s festivals during the reign of Alexander I, which were staged in his honor by Maria Fedorovna. (melody. su)