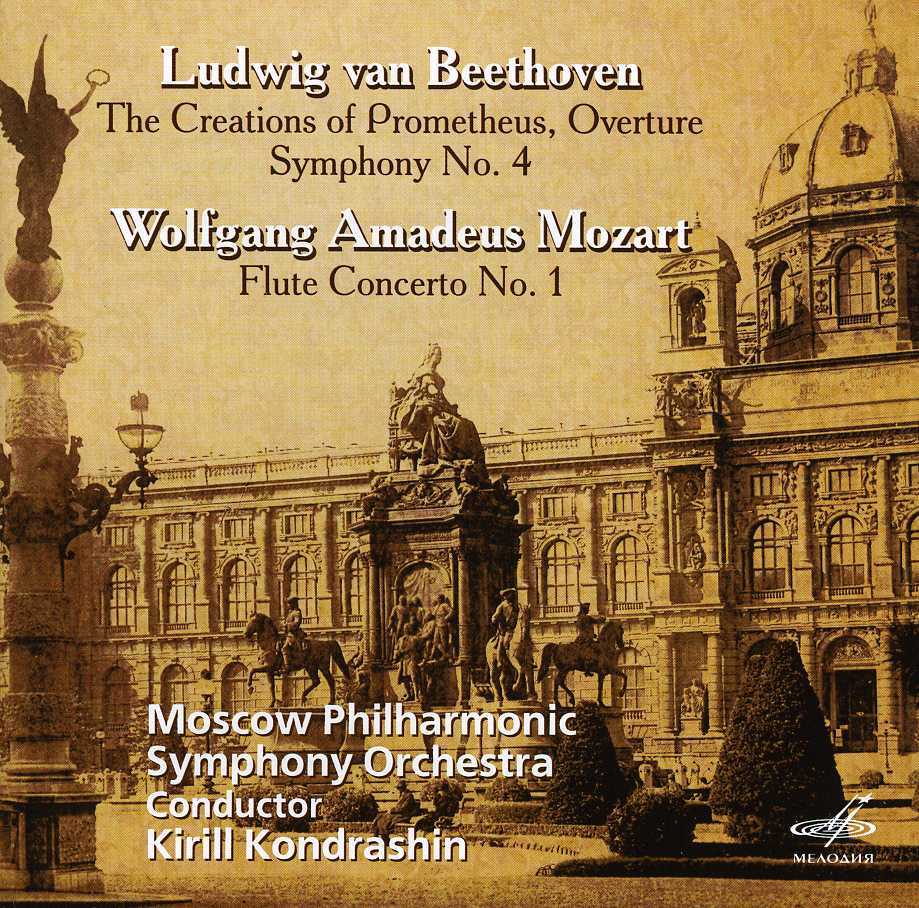 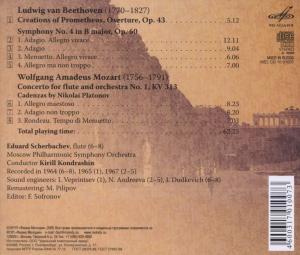 The overture to the »Creations of Prometheus« by Ludwig van Beethoven opens a series of overtures, written in the years between 1803 and 1824 and including his famous »Egmont«, »Coriolan«, as well as all »Leonoras«; this brilliant sequence is crowned with »Home Blessing«. Unlike »Coriolan« and »Egmont«, however, which were inspired by Shakespeare and Goethe, or »Leonora III« that could open the outstanding music of »Fidelio«, the »Prometheus« overture was composed specially for the ballet, about which we know next to nothing – only its plot, the name of choreographer and a few details concerning its staging process.

The choreographer and librettist happened to be a talented and successful person, Salvatore Vigano, who was the first to bring Beethoven's genius to the stage. Vigano, closely familiar with the aristocratic circles, is supposed to have heard the Beethoven's Septet, Op. 20, dedicated to the Empress Maria-Teresa and immediately decided to invite the composer for his future project. Altogether Beethoven wrote 16 items for this ballet, and its premiere took place in the Viennese Burgtheater on 28 March, 1801. That season the ballet ran through 16 performances, later it was presented 13 times more, after which never again appeared on the stage. Not only its choreography, but even a detailed libretto has not survived. We now cannot say, to which stage situations some of the music refers (except overture and entr'actes). Already in the XX century Richard Strauss made his own version, where united these separate pieces into a whole suite and until our times only the popular overture has been played in its original form.

At the same time we know that the following plot was regularly used for a court ballet in those days: »Prometheus animates two statures with the help of heaven fire, but he cannot rouse their consciousness. The voice from above summons him to reject his intention and destroy what he had done. Brought to Parnassus by Zeus and there brought to senses by Apollo's music, the statues begin to see the beauty of the Nature and become sensible to other arts like dancing and pantomime. The composition terminates with festival dances«.

The music of overture, which is a classic sample of the Sonata form with a slow introduction, is permeated with theatrical brightness and that vivifying »Apollonic« spirit that is so typical for Beethoven's compositions of 1802–1803.

In many ways this piece is close to The First Symphony by Beethoven, which was written in the same key – both in its mood and harmonies of the slow introduction, as well as in the way the main and secondary themes were presented. Both of them – the first one is swift and staccato-stroked, the second is coquettish and elegant – allude, by the way, to the music of the last Ballet's movement from where they were taken.

Beethoven wrote his Fourth Symphony in 1806. It was one of the happiest years in the composer's life: he was engaged with Teresa Von Brunswick, whom he passionately loved, then he was very happy to greet the birth of his nephew Karl. That time he was leading a calm and free life at the hospitable palace of his patron, prince Lichnowsky, or in the picturesque castle of Bruswicks in Hungary.

Written between »Heroic« and The Fifth Symphonies, The Fourth Symphony seems to diverge from the mainstream evolution in Beethoven's symphonic style. We will not find here colossal tension and of the previous work or dramatic conflicts of the next one.

It was this Symphony, however, that enraptured the composers of post-Beethoven generation – Mendelssohn, Berlioz, Schumann. Probably it happened because many of its lyrical pages anticipate the epoch of romanticism. Tchaikovsky, underlying the »unfading freshness« of the Fourth Symphony, wrote that it was »an incorporation of happiness and Universal love«.

The first movement starts with a mysterious and slow introduction (Adagio). The theatre character of the music immediately is quite obvious here – only a short time ago Beethoven was absorbed with his opera »Fidelio«, which is also evident in his later work.

Accumulated tension breaks through a passionate stream of festival merriment that starts the main part of the movement (Allegro vivace). A cheerful and energetic theme of the main part gives place to an appeasing melody of the secondary one that anticipates »plain air« sound of the future »Pastoral« Symphony; the concluding part of the exposition combines dance quality and heroism. In the development lyrical emotions come to the foreground – a new theme catches our attention, but this sphere will come to its full expression a bit later. A laconic reprise and a short, dynamic Coda conclude the movement.

The second movement (Adagio in E-flat major) – is one of the most romantic pages of Beethoven's heritage. This music might have been inspired by the image of his »immortal sweetheart«. »A splendid song of love, where violins and tender flutes are emphasized with light strokes of kettle-drums«, – says about this music a French music writer E. Errio. – »Among Beethoven's Symphonies we will find no other episode, which would be more serious, intimate and poetic«.

The third movement, the author himself named »Minuet«, appears to be a true Beethoven's Scherzo with a fanciful play of rhythmical accents and bright dynamic contrasts. It contrasts twice with a slow Trio á la Viennese waltz.

Cheerful animation in the Finale (Allegro ma non troppo) reminds us of Haydn and Mozart; in his music, according to Tchaikovsky's words, Beethoven »poured forth a whole stream of joy, love towards the life and people«.

The Flute
Concerto in G-major by Wolfgang Amadeus Mozart was written while the composer was staying in Mannheim, where he retired after breaking relations with Salzburg Archbishop in 1777. There he first met a flautist and composer J. -B. Wendling, who suggested Mozart making a tour to Paris. Though the enterprise could be very profitable, the lack of money made very difficult to realize the idea. Then Wendling ordered Mozart several compositions for a Dutch officer with a French name DeJean, who was an amateur flautist and made his fortune, serving in West-India. So came into being four Flute Quartets, two Concertos, Andante for flute and orchestra and Concerto for flute, harp and orchestra. It is well known that Mozart did not like the flute and was very skeptical about the executive skills of his contemporary flutists (the same reason caused Mozart disregard of a cello; modern flutists, however happened to be much luckier, than cellists).

Besides he was occupied with other work. The composing was getting on slowly. Two and a half months passed, but only a small part of the work was completed. Let's read a fragment from Mozart's letter to DeJean, where the composer frankly explains his slowness: »the fact, that I could not finish the work is quite natural. Not did not have here any single tranquil hour, I could work only during the night; so I could not get up early enough. Besides one is not disposed to work all the time. Of course I could waste time and paper the whole days, but I want any piece under my name to become music I would not be ashamed of. Moreover I would become a stupid machine if I wrote all the time for one single instrument (especially for the one I hate actually), so, from time to time I wrote something different for a change…« (February 14th, 1778). There is a suggestion that, writing the Second Concerto, Mozart just used his old oboe Concerto, composed in Salzburg in1775, and passed it to DeJean.

In spite of these hard work conditions Mozart created a number of masterpieces. Concerto in G major is the first of them. The first movement is written in the traditional for a classical Concerto Sonata form with a double exposition. It is based on the contrast of images of a ceremonial March: the main theme resembles the introduction of an orchestral Serenade, the secondary one sounds ingratiating and elegant, while the theme linking the second exposition and development is pathetic and agitated.

The second movement – Adagio non troppo in D-major – is a delightful and serene idyll. Its fine coloring, remarkable ornamental variations and amusingly natural development of the flute melody are of a special interest here. This music demands of the executor a filigree accuracy, that is why, perhaps, Andante in C-major, KV 315, which is more simple and laconic, finally replaced this Adagio, which appear to be too difficult for DeJean. The same happened, by the way, with his Violin Concerto № 5 in A major.

The third movement, written in the rhythm of a minuet, has a form of Rondo-Sonata. It contains typical Mozart's images of chivalrous pride (the main part) and coquettish gracefulness (secondary one). In the central episode the music becomes energetic and bravely-pathetic.