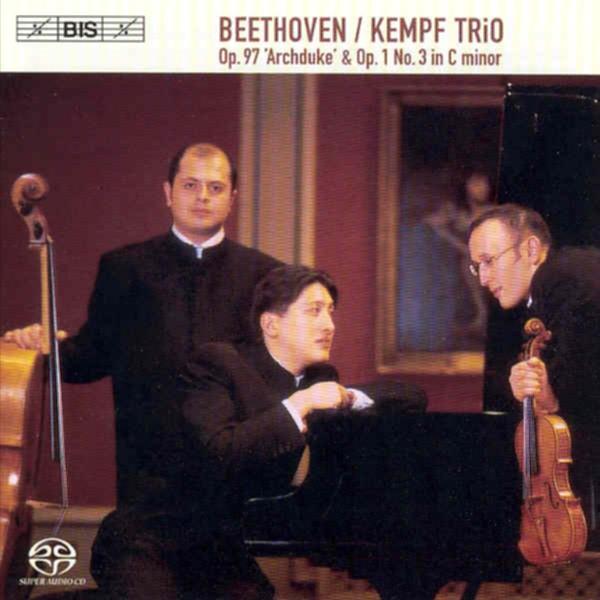 Bewertung:
lieferbar innerhalb einer Woche
(soweit verfügbar beim Lieferanten)
EUR 19,99**
EUR 18,99*
Last year's recording debut of the Kempf Trio, BIS-CD-1302, was welcomed with open arms by the critics. In Gramophone, the young (all three are still in their twenties) trio's interpretations of Rachmaninov and Tchaikovsky were termed as 'fine new performances which easily match the best available' and the BBC Music Magazine reviewer went even further: 'Easily the best interpretations in first-rate sound.' Well, now the trio is back, with producer Jens Braun from the previous record as a guarantee that the sound will be as first-rate. In fact, given that the present disc is a Hybrid SACD with a surround sound option, chances are that the sound will be perceived as even more impressive!

Having given their accounts of two highly romantic examples of the genre, the Kempf Trio now goes back to its roots. In the liner notes, Horst Scholz argues that Beethoven in the three trios from Op. 1 'took a genre that, despite substantial contributions from Haydn and Mozart, was still associated with entertaining salon music, and raised it up to rival the string quartet.' The Trio in C minor Op. 1 was in fact so revolutionary that Haydn tried to dissuade his young (23 years old!) student from publishing it on the grounds that the public would find it difficult to understand. On this occasion, Haydn turned out to be mistaken: the trio was a success, and has remained so.

On this recording it is followed by Beethoven's last piano trio, composed some 17 years after the Trio in C minor and dedicated to Archduke Rudolph of Austria. The archduke was a pupil of Beethoven, and the trio's exposed, sometimes almost concerto-like piano part was evidently composed with him in mind. Here the mature master again proves his genius in what already at the time was called 'incontestably one of the brightest green leaves in the laurel wreath that Beethoven long ago earned.'