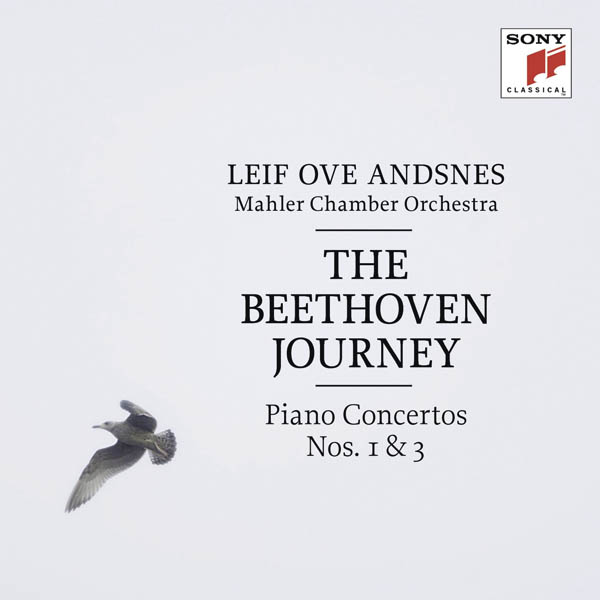 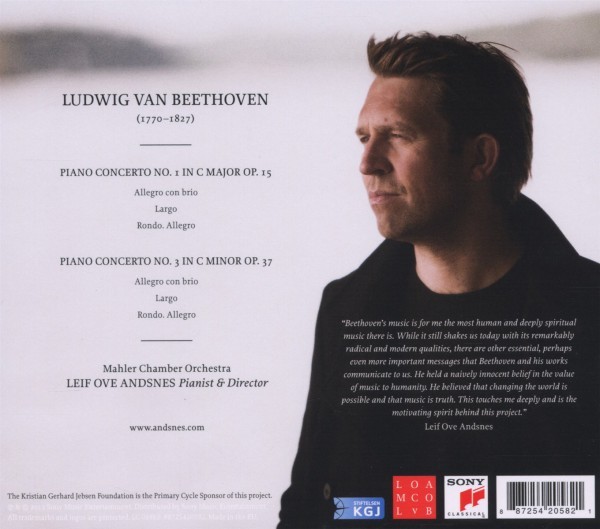 A vision for humanity

Oddly enough, the idea for submerging myself into the world of Beethoven’s five piano concertos partly came about in an unlikely way.

While giving concerts in São Paulo, Brazil, a few years ago, I was staying in a hotel that had Beethoven’s First and Second Piano Concertos playing on a loop in the elevators. I was staying there for a week, and at first I thought I’d go mad hearing these works over and over again, but the more I listened, the more I loved the experience. I loved hearing short fragments of these pieces each time I entered the elevator, fragments of pieces that are so familiar that we so often take them for granted. I found myself again and again getting surprised and overjoyed, and fell in love again with this music.

I am extremely happy to have the opportunity to »travel« this journey with the Mahler Chamber Orchestra, an orchestra so vibrant and so capable of discovering the diversity of ideas and expressions in these magic pieces. Beethoven’s music is for me the most human and deeply spiritual music there is. While it still shakes us today with its remarkably radical and modern qualities, there are other essential, perhaps even more important messages that Beethoven and his works communicate to us. He held a naively innocent belief in the value of music to humanity. He believed that changing the world is possible and that music is truth. This touches me deeply and is the motivating spirit behind this project.

Perhaps Beethoven remains so compelling to us because he both comforts us and shakes us up: his vibrant idealism always gives us hope, but the fervour of his vision for humanity prods us to take action, both as performers, listeners and as members of the human community.

A conversation with Alan Rusbridger

Alan Rusbridger: Am I right in thinking you haven’t recorded much Beethoven so far?

leif ove andsnes: I haven’t recorded anything by Beethoven. I have avoided that. Hopefully I have now something personal to say about this music, and that’s how it feels now, as a very personal thing, and I also realize this music is about as great as it gets.

Let’s look at the concertos: five of them. And you’re going to do the Choral Fantasy as well at the end. Do you think of them as a coherent body? Is there a development that you can see in them? Or are they five unrelated pieces?

They’re surely not thought of as a cycle. I think they are five very different masterpieces. Obviously, though, there is development to see from one to the other.

I very much object to the idea that Beethoven only truly found himself from the Third Concerto. I find that his character is there from the start. One reads that this style comes from Haydn, Mozart. Of course, he took the formal structure and he took certain ideas from Mozart like piano entries with a different motif from the orchestral introduction and so on. But the content is in every way completely different from Mozart. There is not that much of the rhetoric, the dialogue, the opera characters. There is more space, and he’s much more provoking. He grabs you by the neck and says: »Listen, I have something important to say!« It’s interesting in the First Concerto how he just starts with those C major chords. There’s basically no music in the beginning. It’s just the simplest rhythmic pattern and harmonic pattern you can find. And by bar 13, there’s this enormous crescendo, suddenly saying: »Listen! Listen to what I can do with this stupid material!« And that’s completely different from Mozart. And then you have that incredible space – I’m particularly thinking of the second movement of that concerto…

…which is one of the most beautiful slow movements out of all piano concertos.

It’s fantastic. And it’s very long, it’s very spacious. It’s a nod to Mozart in the way of the scoring, because he lets the oboe and flute have a rest, so among the woodwinds you only have the clarinets and the bassoons, like in Mozart’s E major Concerto. It creates this velvety sound which is so caressing. But his lines and his space are so different from Mozart’s. It’s like he’s preaching, in a different way – he’s preaching about humanity in a grander sense.

And the last movement of the First Concerto is also a great movement. It’s got such rhythmic drive. It must be great fun to play.

Absolutely. Whenever somebody brings up the idea of humour in music, that would be one of the first pieces I think of. It’s very funny, and it always makes musicians laugh when we work on it. Also the audience sometimes. The first theme in this movement feels to me to be maybe from a sort of Turkish march, which at the time was very popular in Vienna. That kind of rhythm is like a whip, like in Mozart’s Die Entführung aus dem Serail.

I suppose that the First Concerto is in a way the most innocent. It’s the nearest in mood to Haydn, Mozart. It’s in C major. It’s in lighter keys.

I would say, though, that the Second Concerto, written first, is the milder one, the more gracious, feminine, if you want. The First Concerto has something military march-like in the first movement, and generally feels grander. The second has shorter phrases, gestures, just think of how it starts and how the first entry of the piano appears. If you think about the piano entries of the five concertos, how different they are, there is such an incredible diversity of feeling. In the First Concerto it’s warm, embracing, very friendly. Second Concerto: very seductive gestures up in the treble, feminine, searching. Third Concerto: C minor scales from the bass and up – not really music, almost a provocation. Fourth Concerto: the grand surprise – the piano starts the whole concerto. And music from the angels.

Holy music. Then the »Emperor«, celebration of a chord, it’s an abundance of joy and sound within an ecstatic E flat major chord. Unbelievable difference in each of them.

You’d say that some musicologists – and you’ve made it plain that you disagree with them – talk about the first two as though they’re slight pieces and that it’s with the Third Concerto that Beethoven suddenly arrives. What explains that view?

He is developing, of course, and he is even more daring in his choices, like the incredible key of E major for the second movement in a C minor concerto. That is very shocking, and at the same time very comforting after the turmoil in the ending of the first movement.

It’s in C minor. It’s immediately much darker than the first two.

It is clearly influenced by Mozart’s C minor Concerto. You can hear it in the opening theme. Mozart’s first movement is in 3 / 4, so it’s different, but very much in the same sombre mood. Beethoven is working more with motifs whereas Mozart is working in a more melodic way – his theme is a wonderfully complex and very chromatic line. Beethoven works with simpler elements, and the »heartbeat« timpani motif is heard again and again in very different ways as the undercurrent of pulse in this piece. In the development section you have the cellos and bassoon playing that motif, while the other strings play accompanying figures, and the piano is sort of improvising a beautiful melody on the top. So you have these three layers doing very different things.

The piano entries are these very full-on C minor scales.

Three C minor scales going up from the bass.

And then you thump out the melody all in octaves.

So that’s completely different from the style of the first two concertos.

Absolutely. Here is a kind of anger, showing the power of a C minor scale. And he needed an entrance to this very vertical first theme.

And then you get to the second theme…

As always with Beethoven, that is a complete contrast to the first theme. It’s much more linear, very singing. He works with contrasts all the time. A good friend of mine, the Danish composer Bent Sørensen, said recently with a sigh to me that a problem of composing after Beethoven is that you have to face this, that Beethoven had the ability to be completely surprising and organic at the same time, at every corner. He is right, that’s how these concertos are.

But what sort of barrier had Beethoven crossed by the time that he got to the Third Concerto? Why do people feel that it’s a sort of a different order?

You feel a new kind of ambition from the start. There are even more layers in the way he uses different motifs, in the way he lays out the drama. You feel often that there is something more important to happen, that you still haven’t reached an emotional climax. He is building in a tension which is not there in the same way in the first two concertos. The dramatic impact of that scary ending of the first movement is tremendous, after a huge cadenza which ends with trills just hanging there. We’re left in a landscape where we’re really lost. And then the coda starts with pianissimo chords and arpeggios in the piano, painful chords in the strings, and this heart rhythm, which has gone through the piece, now only played by the timpani. That is a magical idea. Then two bars of a sudden, enormous crescendo followed by an explosion and drama at the end emphasized by strong trumpets in the orchestra. The ending of this movement was one of the first things that really caught me in the Beethoven concertos when I heard it as a child. I was completely captivated.
So we’ve come to the end of the first movement of the Third in a very bleak place. And then the piano comes in at the beginning of the second movement, and we’re now in E major.

Yes, those beginning chords are so deep and magical. It’s very strange, though, why he wrote a Largo movement like that in 3 / 8. There are lots of 32-note passages, even 64-notes. It looks sometimes like a fast movement when you look at it on the page. I remember I asked the conductor Herbert Blomstedt: »Why do you think he wrote it that way?« And he said: »A possible explanation could be that he wanted it to look Baroque, like the Bach solo sonatas for violin, for example.« It looks sort of dirty and busy on the page, even in the slower movements. As opposed to the Italian Baroque, where it looks cleaner, and with longer notes.

It hasn’t got a dark side to it, this movement?

Maybe not, but it has a very lonely feeling. It is more »private« than the slow movement of No. 1. But it has something very reconciling. He loved Handel and I think there are a few places in this movement which are reminiscent of Handel, like the very last chord.

The movement gradually dies out and then there is this sudden and liberating fortissimo chord in E flat major. It is a wonderfully Baroque grand thing to do.