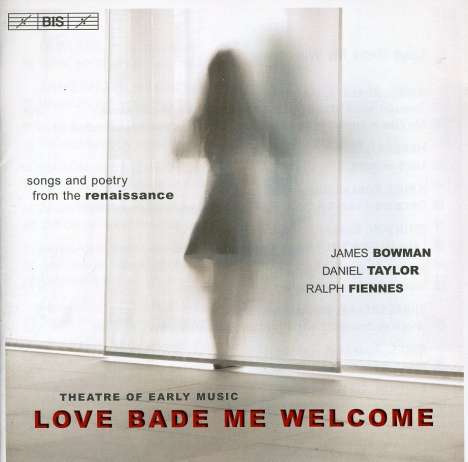 lieferbar innerhalb einer Woche
(soweit verfügbar beim Lieferanten)
EUR 19,99*
Versandkosten
For as long as man has created works of art, love and its attendant joys and pain has provided subject matter to a great part of them. One Golden Age for songs and poems about love was the 16th century in England, where Shakespeare, Dowland and many others sang to the glory of their lovers, loved ones and Love itself, while never forgetting the grief which almost certainly follows the passion. On this disc, counter-tenor Daniel Taylor and the Theatre of Early Music (also on the much praised BIS-CD-1346: Leçons de Ténèbres) have devised a programme which includes both songs and poems showing the many faces of Love, as painted by poets and composers in the years between 1560-1630. The musicians are joined by the acclaimed Shakespearean actor Ralph Fiennes, known from films such as Schindler’s List, The English Patient and The Constant Gardener, who recites poems by Shakespeare, Sir Walter Raleigh, Ben Jonson, Thomas Campion and others. These poems intersperse a collection of songs, duets and instrumental pieces by Dowland, Robert Jones and Robert Johnson.

James Bowman, appearing on BIS for the first time, has had an unparallelled career. He was the very first counter-tenor to appear at Glyndeborne (in 1971) and has since visited most of the world's major opera houses. He and Daniel Taylor have explored the English lute songs before, together and on their own. Here they are joined by experts in this particular field: Frances Kelly, Elizabeth Kenny and Mark Levy have all made their reputations in this repertoire, both as soloists and in various ensembles. Together the six performers make Love Bade Me Welcome a unique disc: at turns bitter-sweet, tragic, joyful, full of hope and disillusion – just like Love itself!