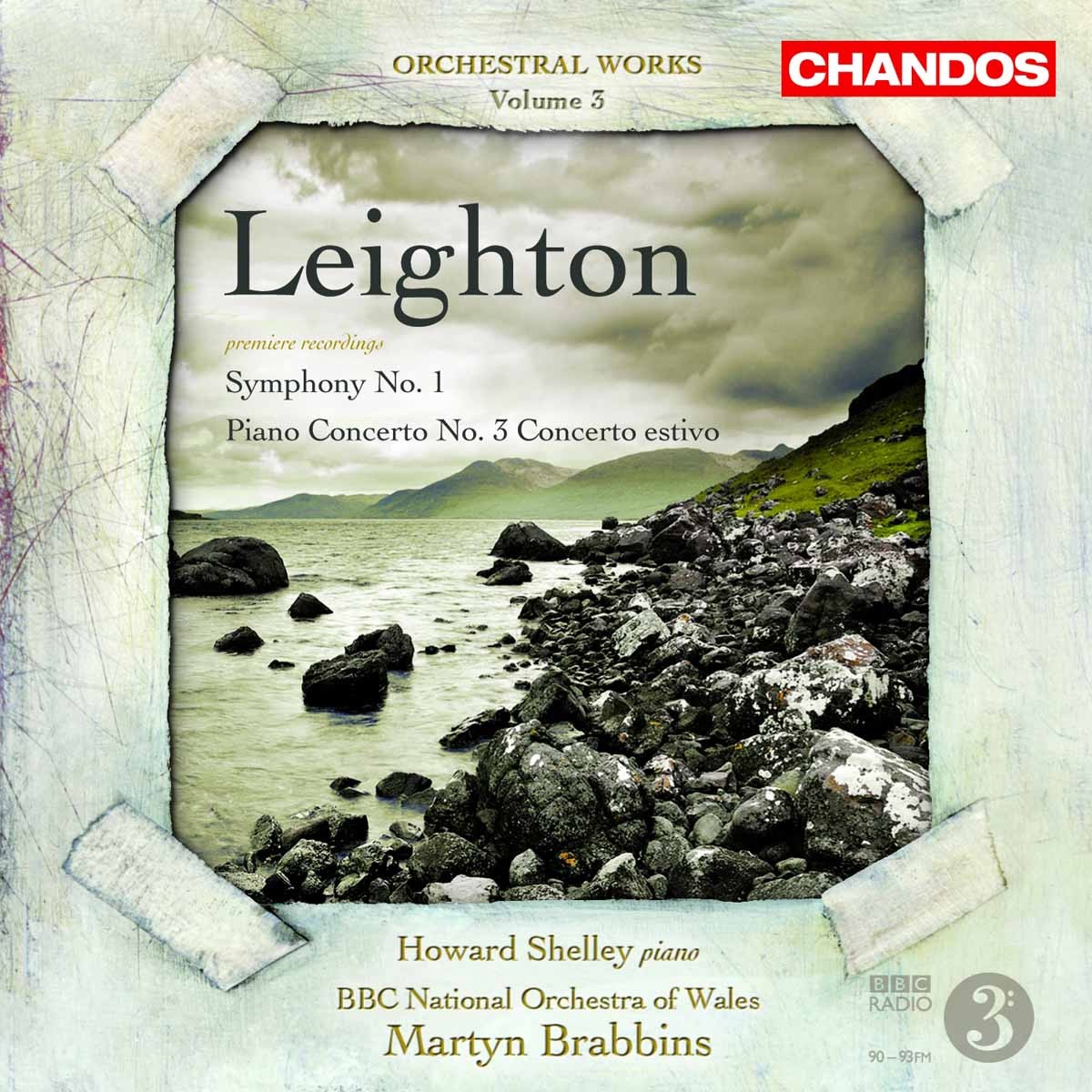 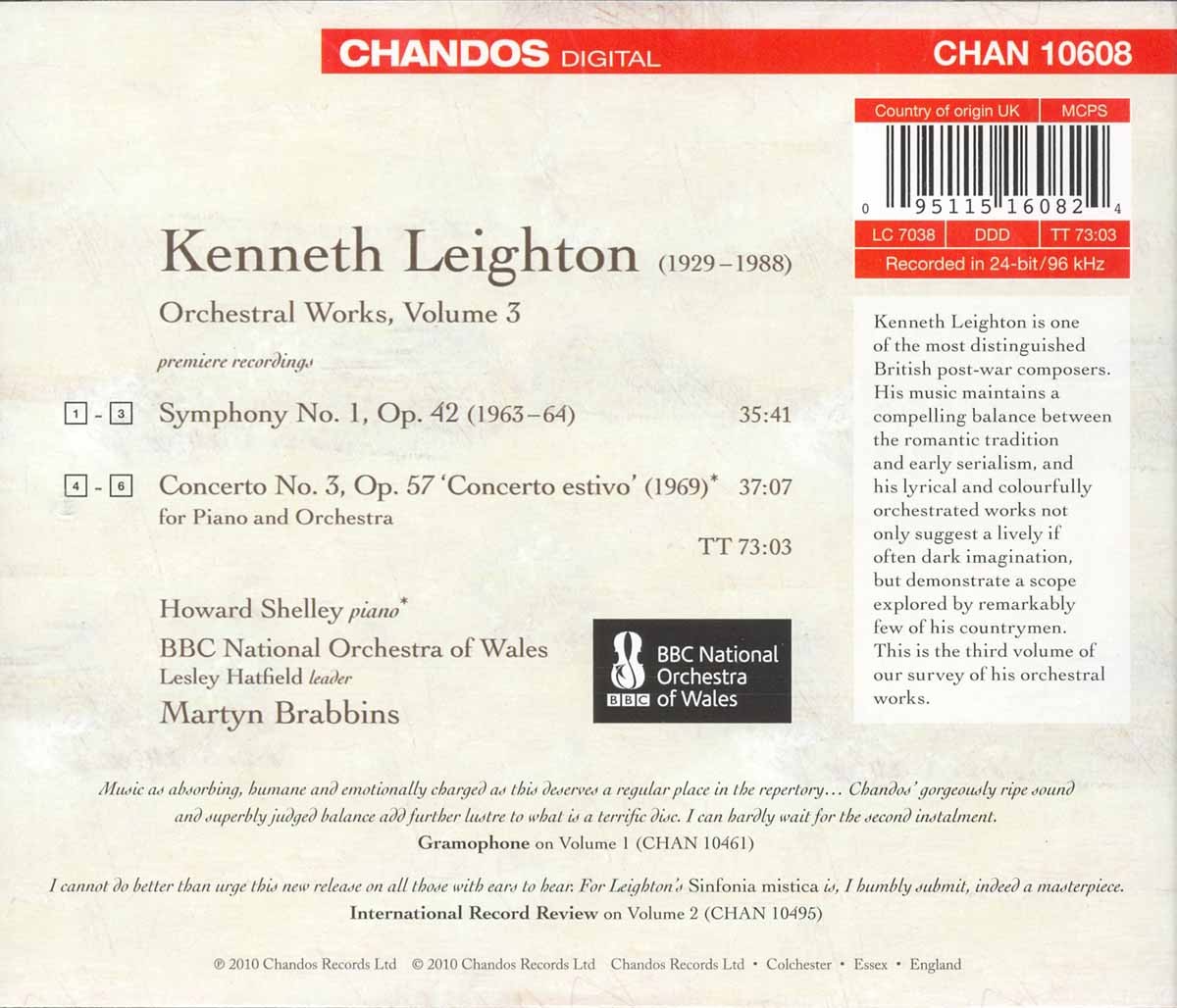 This is the third volume in Chandos’ latest championing of the music of Kenneth Leighton, presenting two further premiere recordings. The previous volume, including Symphony No. 2 (Sinfonia mistica), received tremendous critical acclaim, earning a Rosette in the latest Penguin Guide to Recorded Music. It was a Critic’s Choice in the December 2009 issue of Gramophone, Andrew Achenbach writing, ‘Chandos’ most valuable exploration of Kenneth Leighton’s large-scale output continues with this exhilarating coupling… Miss at your peril’. International Record Review wrote: ‘I cannot do better than urge this new release on all those with ears to hear. For Leighton’s Sinfonia mistica is, I humbly submit, indeed a masterpiece.’

This latest volume includes the First Symphony, completed in 1964. In three movements, it is the only symphony by Leighton to employ purely orchestral forces. According to the composer, the opening movement ‘sets a mood of elegiac lyricism, and eventually becomes a strong, even desperate protest’, while the second movement, a vibrant scherzo, ‘loosens the reins, and in a spirit of rebellion seeks to arrive at an affirmative answer by sheer force of will’. The final movement is described as the ‘expressive essence of the symphony… a movement of great beauty’.

Leighton wrote of his Third Piano Concerto (1968): ‘On the whole the music is more relaxed, more lyrical, and certainly more tonal than that of the previous two piano concertos. And there is also much less emphasis on counterpoint and more on vertical sonorities. Its three movements follow the traditional fast – slow – fast form.’ The central ‘Pastoral’ evokes ‘the warmth and stillness of a long hot summer afternoon… with a more agitated and dance like central section’. The final movement comprises a set of variations, based on the main theme of the work.

One of the most famous and recorded of pianists in the world today, Howard Shelley receives unanimous critical acclaim for his many recordings, whether on Chandos or other labels. Like the conductor, Martyn Brabbins, he has championed much rarely performed repertoire, this disc being only his latest example.

"...The performances of these two large works are excellent. Pianist Howard Shelley offers a reading of brilliant, incisive vitality, while the BBC National Orchestra of Wales, under the directionof martyn Brabbins, exhibits a level of proficiency comparable to the best British orchestras." Walter Simmons - Fanfare March / April 2011

“…I’m sure Leighton would have been delighted with both performances [Symphony No 1 & Piano Concerto No 3], which are consistently excellent in every department.” Malcolm Hayes
BBC Music Magazine - January 2011

“…This disc is an utterly flabbergasting success on every level and constitutes another milestone in the documentation of 20th century English music. Don’t let it get away from you.” Paul A Snook
Fanfare - November / December 2010

“There is no doubting the commitment of the performers or the excellence of the recorded sound – or that Leighton’s music demands to be heard.” Colin Anderson
classicalsource. com - 8 July 2010