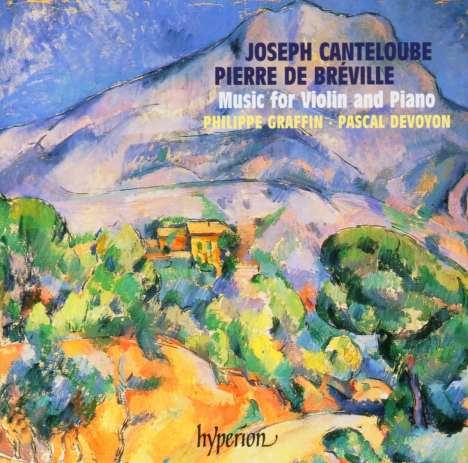 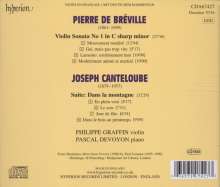 The enterprising Philippe Graffin and Pascal Devoyon continue their Odyssey through the byways of the French repertoire with two enchanting discoveries for violin and piano.

Joseph Canteloube is remembered these days almost exclusively for a bouquet of songs drawn from his five cycles of Chants d’Auvergne; Pierre de Bréville, much lauded during his lifetime, does not even have Canteloube’s one-work-composer status to keep his name before the public. Both deserve better.

Bréville’s Violin Sonata No 1 in C sharp minor, the first of five, was composed in 1918 / 9. Premiered by George Enescu, this is a good-humoured work, combining the lyricism of Fauré and Chausson with a personal freshness of style to make an appealing, and highly original, whole.

Canteloube wrote his suite Dans la montagne early in his career – and its very spontaneity makes for a striking contrast with Bréville’s predilection for complexity of form. Written under the attentive guidance of Vincent d’Indy, the suite perfectly encapsulates the atmosphere of a summer evening in the foothills of the composer’s beloved Auvergne

'Both these extensive and serious works are fine examples of what is best about French Romanticism stretching into the modern era. Played with passion, commitment to idiom and technical fluency, as well as being excellently recorded, these little-known pieces should win wide appeal' (BBC Music Magazine)

'This is music that could easily pall in less sensitive and committed hands, but Philippe Graffin and Pascal Devoyon almost have one believing it's a neglected masterwork' (International Record Review)

'Fans of French music from this period will need no further recommendation from me. A beautiful disc' (ClassicsToday. com)