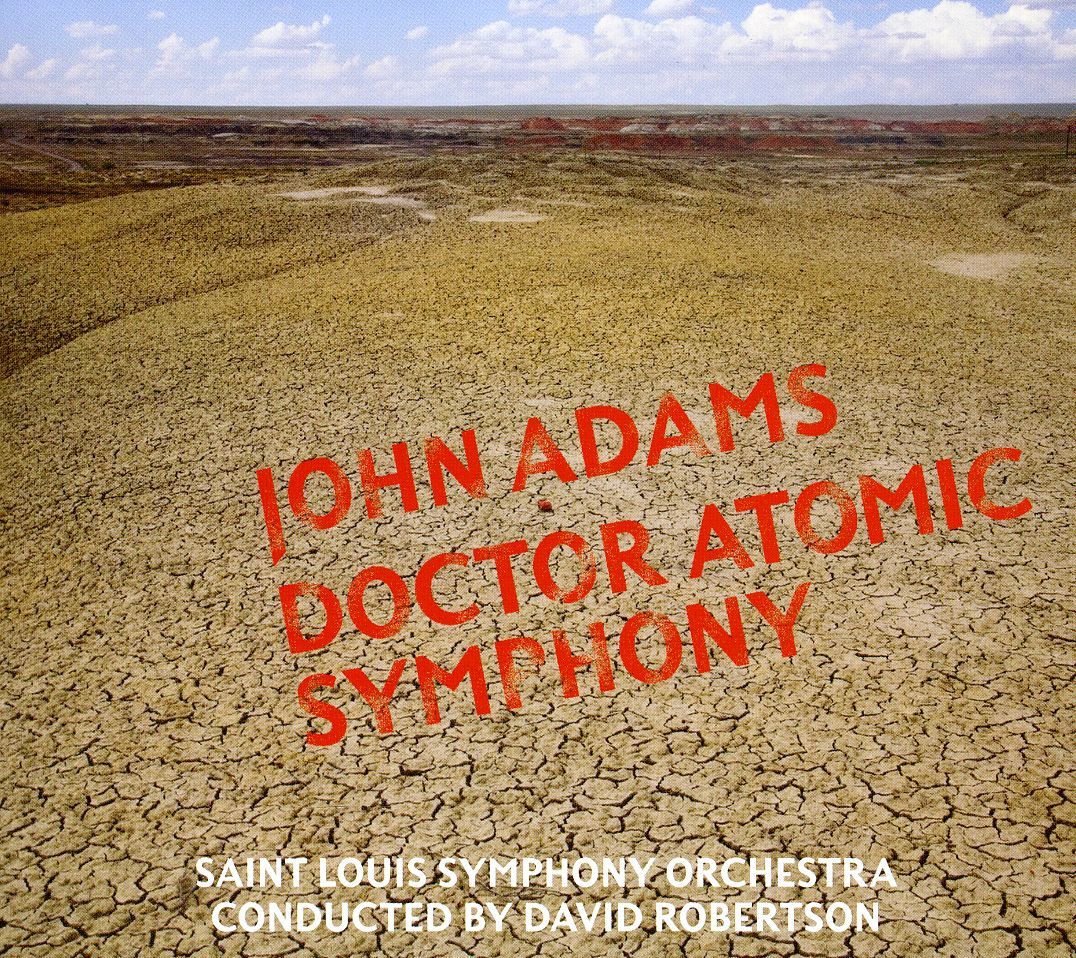 "An adaptation of several extended sections [of the Doctor Atomic opera]," wrote the New York Times, "the score invites you to hear the music—driving passages with pounding timpani, quizzically restrained lyrical flights, bursts of skittish fanfares—on its own terms, apart from its dramatic context."

Nonesuch released Pulitzer Prize–winning composer John Adams’s Doctor Atomic Symphony on July 28, 2009. A purely instrumental work, the piece is drawn from Adams’s opera Doctor Atomic. Also on the album is Adams’ 2001 piece, Guide to Strange Places. This is the premiere recording of both works. David Robertson conducts the Saint Louis Symphony Orchestra on this recording, which is his first CD with the ensemble.

Doctor Atomic Symphony’s three movements include music from the opera’s overture; the Act II “panic” music; the “military matters” sections from Act I; and an orchestral setting of Robert Oppenheimer’s signature “Batter My Heart” aria that closes Act I of the opera. Creating a symphony from a three-hour opera proved to be no small task, as Adams told the St. Louis Post-Dispatch: “It was like being a filmmaker, with cans and cans of footage I’d shot, and I had to edit it in a meaningful way.”

Doctor Atomic is the fifth work for the stage that Adams and his longtime collaborator Peter Sellars created. The opera concerns the final hours leading up to the first atomic bomb explosion at the Alamagordo test site in New Mexico in July of 1945. The focal characters are the physicist and Manhattan Project director, Dr. J. Robert Oppenheimer; his wife Kitty; Edward Teller; and General Leslie Groves, the US Army commander of the project. It has been critically praised by, among others, The New Yorker, which called its score “not only ominous score also uncommonly beautiful. Scene after scene glows with strange energy,” and the New York Times, which called the score, “Mr. Adams’s most complex and masterly music.”

Guide to Strange Places was inspired by a book Adams found in Provence: Guide noir de la Provence mystérieuse (A Black Guide to Mysterious Provence). He says, “It was one of those typically French guides—minutely detailed and bristling with information and odd facts about the area. In this location there was a strange geological formation; in another, unusual climatic occurrences; somewhere else a horrific historical event had taken place or perhaps a miracle had been witnessed. A chapter was dedicated to paysages insolites—or ‘strange places.’ Each classification came with its own special identifying icon. It set my imagination off.” Adams continues, “In a sense, all of my pieces are travel pieces, often through paysages insolites—it’s the way I experience musical form.”

The Los Angeles Times said of the work, which was completed in early September 2001, “What begins as bright, chirping birdsong ends with frightening bass drum thuds and unresolved growls in the brass ... [I]t sounded as if Adams had presciently found the strange places we all discover after our complacency is shattered.” The Guardian calls it "one of Adams's most impressive achievements of the last decade."