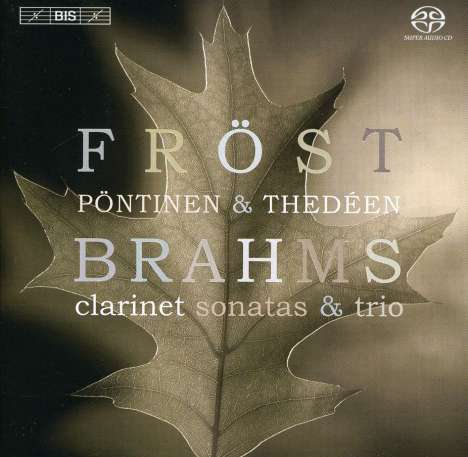 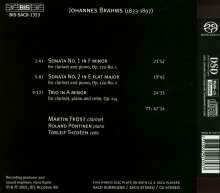 On it's release, Martin Fröst's recording of Mozart's Clarinet Concerto and Quintet for Clarinet and String Quartet (BIS-SACD-1263) received glowing reviews. The magazine Classica-Répertoire named it the finest recording ever of the Concerto after performing a blind test involving no less than 50 interpretations of the work. And the critic in International Record Review agreed with his French colleagues when he wrote: »Better recorded performances of these towering masterpieces may exist, but I have never heard them. In their technical proficiency, style consciousness and broad, yet never exaggerated emotional range, they shine as major achievements.«

Martin Fröst now continues his survey of the core clarinet repertoire with Brahms' autumnal works for the instrument. Composed towards the end of Brahms' life, the trio and two sonatas on this disc are the fruits of the meeting between a composer who feared that he had lost his inspiration, and a great musician who helped him find it again. Richard Mühlfeld was the favourite clarinettist of both Richard Wagner and Hans von Bülow, but these works by Brahms are surely the most impressive testimonial to his musicianship.

For this recording, Fröst is partnered by his regular collaborator Roland Pöntinen at the piano – a team which was highly praised for their Schumann recording a couple of years ago, BIS-CD-944, of which the reviewer in Répertoire wrote: »An hour of sheer happiness … Seemingly effortlessly the musicians find the same words, the same accents, the same sighs, that common way of thinking which is the mark of all great recordings of chamber music. A luminous Schumann.« Eminent cellist Torleif Thedéen makes up the numbers in the trio, in which the central episode of the third movement, a dialogue between the clarinet and cello, was described by Brahms's friend Eusebius Mandyczewski as sounding »as if the instruments were in love with each other«.

»[Fröst's] smooth, even tone is deliciously seductive, and he can darken or lighten the sound at will, from velvet warmth with a sensitively applied vibrato, to a soaring clarity that never goes louder than lovely, as they say… I could write more, but if you'll excuse me, I'd rather like to be seduced all over again.« Andrew McGregor, BBC Radio 3, CD Review, February 2006

»In the two sonatas, [Fröst] is perfectly matched by his compatriot Roland Pöntinen in performances which capture Brahms' serious, autumnal mood without undue heaviness: the way they drift with apparently telepatic understanding through the opening of the E flat Sonata is especially memorable, but entirely characteristic.«
BBC Music Magazine February 2006

»Blandness is something one could certainly never accuse Martin Fröst, Roland Pöntinen and Torleif Thedéen (all artists I admire enormously) of…this fine disc deserves a firm recommendation for sweeping away the cobwebs off scores that can on occasion appear to settle too cosily into ›old pipe and slippers‹ mode.«
International Record Review February 2006

»Martin Fröst is as fine a clarinettist as anyone alive today, and he teams up with two equally superb colleagues in presenting exceptional performances of these three chestnuts of the chamber-music-with-winds repertoire.«
Classicstoday. com March 2006

»… wonderful, blossoming sound that sweeps you away in torrents of romantic fury … Mr. Fröst brings a young mans' take to these introspective, intimate words. I would not want to be without this disc…«
American Record Guide April 2006