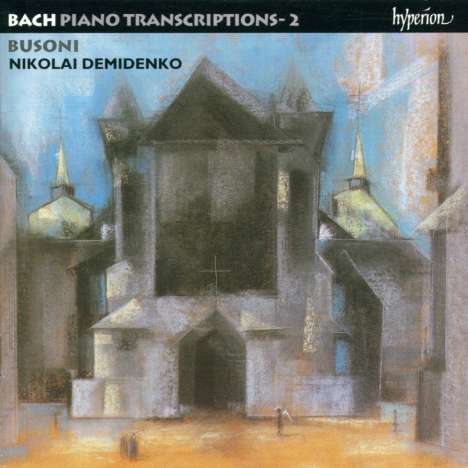 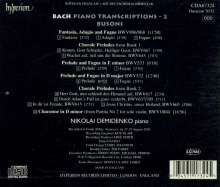 Following the success of Nikolai Demidenko's first disc of Busoni's transcriptions of Bach (CDA66566), here he completes the project. Busoni developed an individual approach to re-casting Bach's organ works for the piano, and utilizes a full range of sonorities to recreate the sound and effects of the organ. These transcriptions were so popular during Busoni's lifetime that his wife was once introduced by a society patron as Mrs Bach-Busoni!

This disc includes several lesser-known chorale preludes, the imposing Chaconne (originally for solo violin, although Busoni views it very much as another organ transcription), the D major Prelude and Fugue BWV532, and two rarities—the E minor Prelude and Fugue (BWV533) that Busoni used to illustrate his transcription techniques in the appendix to his edition of Bach's Das wohltemperirte Clavier, and the Fantasie, Adagio and Fugue, which is a hybrid work conjoining two Bach keyboard works (two thirds of the fugue is entirely by Busoni, as Bach left it unfinished).

Nikolai Demidenko conjures a magnificent sound from his Fazioli piano, and draws on his unique palette of instrumental colour. Anyone who has heard his first Bach-Busoni disc will want this follow-up. This disc is also part of a new Hyperion series exploring the wealth and diversity of piano transcriptions of Bach.

»Demidenko plays them all with great panache and limitless technical command, clearly relishing the vast array of colour that Busoni's fertile imagination encourages« (The Guardian)

»Nikolai Demidenko performs all the music here with admirable devotion ... The playing throughout this enterprising recital cannot be faulted« (BBC Music Magazine)