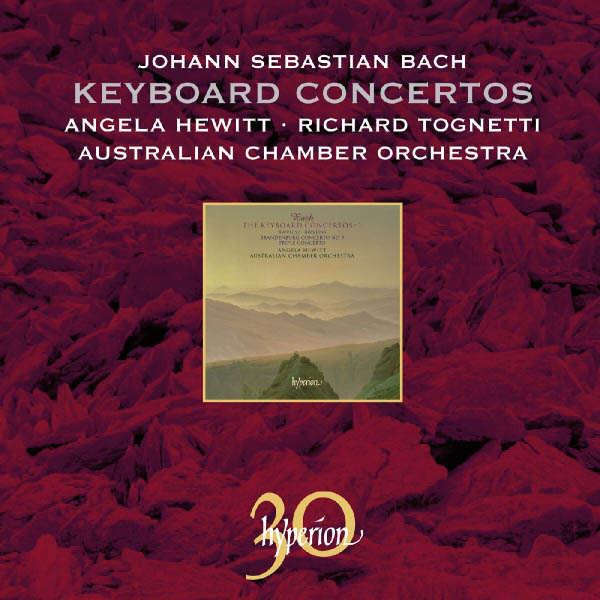 Bach's extant concertos that feature a solo keyboard were most written in the 1730s and are thought to be arrangements of earlier concertos, many of which are now lost (though two will be recognized as Bach's E major and A minor violin concertos and the sixth is an arrangement of the fourth Brandenburg). The fifth Brandenburg Concerto, with harpsichord, flute and violin soloists, dates from 1721 and is generally regarded as the first

Concerto for a solo keyboard instrument ever written. Bach made the keyboard part particularly brilliant and included a huge cadenza; he certainly knew how to establish a genre with a bang!

Hewitt's Bach is by now self-recommending but only after playing Bach across the world with numerous ensembles did Angela decide that the Australian Chamber Orchestra were the perfect collaborators. After a month of concerts across Australia these recordings were set down in Sydney in February of this year and the frisson of artists operating at the peak of their form is clear for all to hear. One is immediately struck by the quality of chamber-music playing as phrases are passed from soloist to orchestra and, in the case of Brandenburg

Concerto No 5 and the Triple Concerto, between all three soloists. Rhythms are buoyant, tempos lively, the spirit of dance is never far away in the fast movements and a perfectly vocal quality pervades the sung lines of the slow movements.

These recordings will surely be the jewels in the crown of Angela Hewitt's magnificent Bach series.

»As always, she [Hewitt] really sparkles in the allegros, infusing the music with wit as well as technical bravura« (Sunday Times)

»Ms. Hewitt's recordings exude timeless beauty and introspection, and when wed to Hyperion's exquisite and sensuous tonal lustre, are must-haves for the Bach enthusiast« (Fanfare, USA)