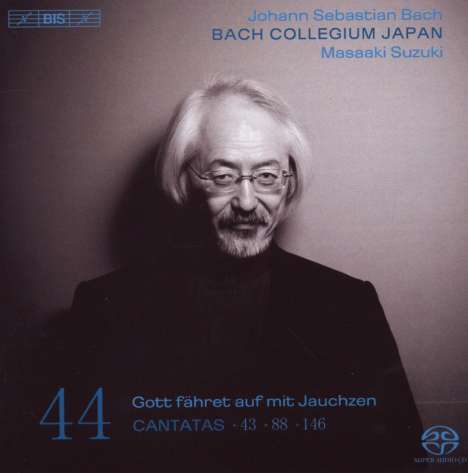 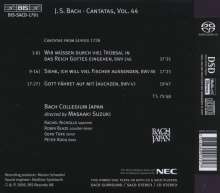 versandfertig innerhalb von 1-3 Tagen
(soweit verfügbar beim Lieferanten)
EUR 19,99*
Versandkosten
Volume 44 of this universally acclaimed series takes us to Leipzig in the spring and summer of 1726. The two cantatas BWV 146 and 43 were composed for Jubilate Sunday and for Ascension Day respectively, both of them joyous occasions celebrating Christ’s resurrection and subsequent ascension into heaven. In BWV 43 the aspect of celebration is obvious in a scoring that includes trumpets and timpani, lending splendour and emphasis to the jubilant opening, a complex choral fugue. The work also provides each of the four vocal soloists with arias that express different aspects of the mystery of the Ascension. In BWV 146, Bach and his unknown librettist followed the gospel passage for Jubilate Sunday: ‘your sorrow shall be turned into joy’. In consequence, the various movements present jubilation and grief successively, beginning with an instrumental Sinfonia which in spite of its minor key is characterized by a bubbling vitality. Based on a lost violin concerto which also served as the model for one of Bach’s harpsichord concertos, this movement gives a soloistic part to the organ – on this recording the fine Marc Garnier instrument of the Shoin Chapel in Kobe. The organ also plays a prominent part in the following movement, for which Bach again used material from the violin concerto, simply adding the lamenting choral parts to the existing score. In the third cantata on the disc, BWV 88, the subject is the well-known incident of Christ telling Peter to throw out his nets once more after a night of unsuccessful fishing. The soloists in these three works have all appeared before in the series, and the Bach Collegium Japan and Masaaki Suzuki are in the same fine form that inspired the reviewer in the French magazine Classica when writing about Volume 42: ‘an interpretation of incontrovertible eloquence. Suzuki serves Bach in the same manner as the composer served God and his church: humbly, but not without pride.’