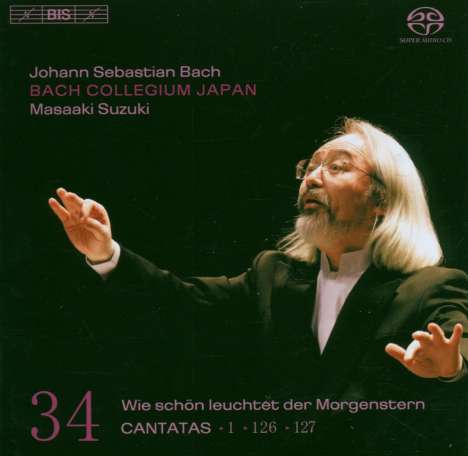 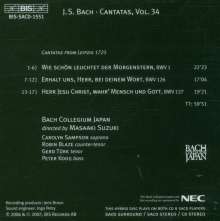 versandfertig innerhalb von 1-3 Tagen
(soweit verfügbar beim Lieferanten)
EUR 19,99*
Versandkosten
The label ‘a musical universe’ fits Bach’s church cantatas perfectly not only on account of their sheer numbers, but also because they – the restraints of the genre notwithstanding – contain an amazing variety of moods, timbres and styles. In 33 previous volumes comprising 114 cantatas Masaaki Suzuki and his Bach Collegium Japan have been guiding us through this universe, to the acclaim of both collectors and reviewers. In Classic FM Magazine, the reviewer wrote of Volume 29: ‘The sheer polish and technical accomplishment of the music-making immediately hold the ear, and are reinforced by subtle phrasing and a quality of listening among all concerned that allows Bach’s counterpoint to progress with lightness and jaw-dropping clarity. Suzuki’s ongoing cantata cycle gets better with each release.’ Volume 31 was greeted in a similarly rapturous manner by the reviewer on the web site MusicWeb International, who concluded: ‘This disc is a perfect introduction to this wonderfully rich repertoire, truly music’s greatest treasure trove.’ The three cantatas on Volume 34, the present disc, were first performed in February and March 1725, in the Thomaskirche in Leipzig, where Bach was employed. The first one, Wie schön leuchtet der Morgenstern, was composed for the Feast of the Annunciation, and celebrates the joyous news brought to Mary of the coming birth of Christ in a suitably jubilant manner. A particular feature is the unusual scoring – as well as a string orchestra there are two horns, two oboi da caccia (i. e. alto oboes) and two solo violins. BWV126 (Erhalt uns, Herr, bei deinem Wort) is in a rather more dramatic vein, with its exhortation to God to support mankind against the enemies of the faith. The recitative ‘Der Menschen Gunst und Macht’ for alto and tenor is particularly noteworthy: Bach has cast the entire movement in the form of a dialogue, creating a fusion of recitative, arioso and chorale that is without equal in its era. The disc ends on a more resigned note with BWV127, based on a hymn which is in fact a song of death, ending with a plea for the forgiveness of sins. The soprano aria ‘The soul will rest in Jesus’ hands’ combines a certainty of belief and a longing for death are combined in one of Bach’s most beautiful and individual cantata movements, and the simple four-part final chorale concludes with an exquisite sequence of harmonies that lends a dreamlike quality to the words ‘until we slumber blessedly’.