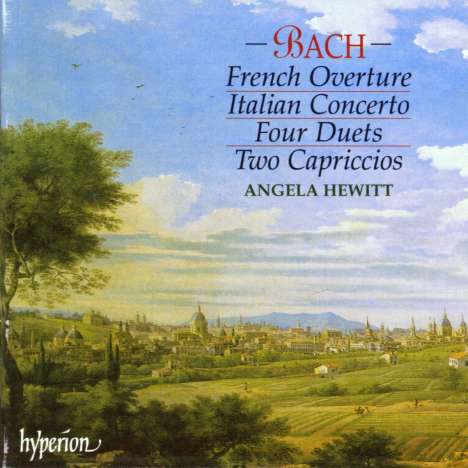 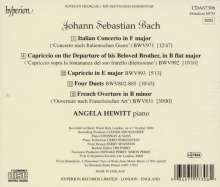 Angela Hewitt's recordings of J S Bach's keyboard works are rapidly being seen as the definitive modern survey on the piano. Such is her natural affinity for Bach's style, her aliveness to his dancing rhythms and her sensitive use of the modern instrument, that she is the natural successor to a prestigious line of great Bach pianists.

This disc includes works from the second and third volumes of Bach's Clavierübung (Keyboard Practice). In the Italian
Concerto and French Overture Bach demonstrates not only his skill as translating to the keyboard two of the most popular orchestral genres of the time, but also his natural assimilation of their respective national characteristics, while remaining true to his own style. These are among his happiest inspirations. The Italian
Concerto brims with joyous thematic invention and allusions to solo and orchestral contrasts, while the French Overture (often called a Partita) is a lively dance suite. The Four Duets, rather like more mature Two-part Inventions, and the youthful Capriccios complete a sunny and inspirational disc.

»Hewitt's playing radiates joy, wit and profound understanding of the composer's keyboard style. This series is one of the record glories of our age« (The Sunday Times)

»Hyperion's good sense in signing Angela Hewitt deserves yet another round of applause. Hot on the heels of her superlative account of the Goldberg Variations comes another disc that proves her status as one of today's finest Bach interpreters« (International Piano Quarterly)