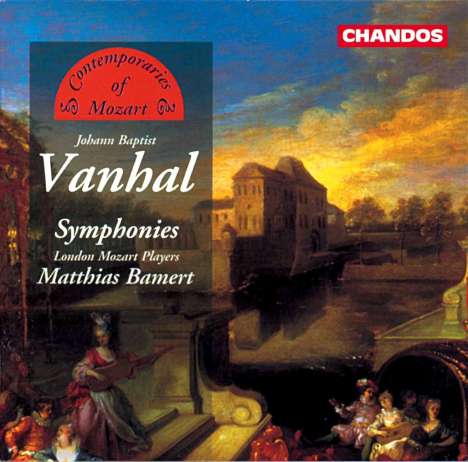 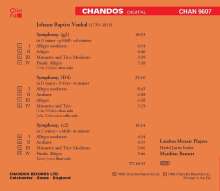 Renowned for their lucid interpretations, the London Mozart Players under the expert guidance of Matthias Bamert return with the eighth volume in this highly regarded Chandos series.

As well as being a composer of note Vanhal was a violinist of some stature. He was born in 1739, the son of a bonded peasant and has his first music lessons in about 1752. Eight years later he moved to Vienna, took lessons with Ditterdorf and established himself as a teacher, numbering Ignace Pleyel amongst his pupils.

Vanhal’s Symphony in D major (D4) is thought to date from 1779 or earlier, and is scored for strings, two oboes, bassoon, two horns, two trumpets and timpani. It begins with a festive sonata-form Allegro moderato with two well-contrasted thematic groups, both of which are bought into play in the development section. The second movement is a gently assertive Andante in A for five-part strings, the third, a sonata-form Allegro which echoes the ceremonal spirit of the first.

The Symphony in C minor (c2) dates from 1770 or earlier and is scored for strings, flute and pairs of oboes, horns trumpets and timpani. The tense first movement in 3 / 4, has two contrasting subjects. Next comes a noble, elegiac Andante in F minor for strings only, and a stern Minuet. The finale echoes closely the style and pattern of the first movement.

The Symphony in G minor (g2) from about 1771 is modestly scored for strings and pairs of oboes and horns. The first movement (again marked Allegro moderato and again in 3 / 4) begins with a theme whose restless character is emphasized by its shifting chromatic bass. A complete contrast is offered by the Adagio in E flat major, another captivating solo for oboe, accompanied by strings only (mostly pizzicato). Next comes a rather serious Minuet with a Trio. Once again the mood of the first movement is recaptured in the nervous finale.

"...The performances under matthias bamert are utterly beyond reproach; his expert and attentive direction and scrupulous preparation have secured playing of tremendous verve and élan from the London Mozart Players, and the Chandos sound is in the demonstration category. Another magnificent installment in this eminent and timely series. Don’t miss it!" Michael Jameson - Fanfare - September / October 1998

"I was particularly glad to see that this CD features unfamiliar symphonies ... The London Mozart Players have chosen three contrasting pieces, the common elements being Vanhal’s melodic charm (try the Andante from the C minor symphony) and harmonic simplicity. The woodwind solos are particularly attractive ... Matthias Bamert’s choice of tempi seems just right. Another excellent volume in their Contemporaries of Mozart series ..." BC - Early Music Review - May 1998